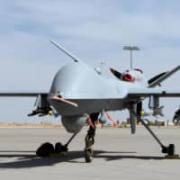 The National Guard's Fire-Mapping Drones Get an AI Upgrade

More than 3 million acres of California have burned this year, and 18,000 firefighters are still battling 27 major wildfires across the sooty state sometimes called golden. And every day, high above the smoke, a military drone with a wingspan roughly 10 times that of LeBron James feeds infrared video of the flames back to March Air Reserve Base, east of Los Angeles, to help map the destruction and assist firefighters. These MQ-9 "Reaper" drones don't usually fly domestic--they're on standby in case the Air Force needs them for overseas reconnaissance. But climate change has helped make crisscrossing California gathering video a new fall tradition for the 163rd Attack Wing. Its drones have helped map wildfires every year since 2017, thanks to special permission from the secretary of defense.

They spent hours circling the sky, seeking, among other things, surface-to-air missile launchers lurking in the brush. The missiles they found weren't enemy ones. They were props for early test flights of a prototype military drone stuffed with artificial intelligence--the latest product from Anduril, a defense-tech startup founded by Palmer Luckey, the creator of Oculus Rift. The new drone, the Ghost 4, shows the potential for AI in military systems. Luckey says it is the first generation that can perform various reconnaissance missions, including searching an area for enemy hardware or soldiers, under the control of a single person on the ground.

US Air Force grapples with vexing problem of AI spoofing

The US Department of Defense (DoD) is worried that artificial intelligence programs might have serious and unknown vulnerabilities that adversaries could exploit. In particular, the Pentagon is worried that the technology could not only be hacked, but could be "spoofed". That is, it could be intentionally deceived into thinking that it sees objects – or military targets – that do not exist. The opposite is true as well: military targets could be erroneously ignored. That is one reason the US Air Force (USAF) and the Massachusetts Institute of Technology founded the "MIT-Air Force AI Accelerator" in 2019.

It's official: The robots are taking over. But in a significant development on August 20, an artificial intelligence (AI) program managed to defeat a human F-16 pilot in simulated dogfights. The AI program, designed by tech firm Heron Systems, was pitched against the human pilot in an environment resembling an elaborate video game during the third and final event of the AlphaDogfight trials organized by U.S. Defense Advanced Research Projects Agency (DARPA). Heron System's website notes that the program was based on deep reinforcement learning – an AI technique that combines insights from behavioral psychology with how the human cortex is structured and functions – along with unspecified innovations. The bested human operator, publicly known only by their callsign, "Banger," was reported to have been trained at the Weapons School at Nellis Air Force Base in Nevada.

The US Air Force is preparing a human versus AI dogfight

The US Air Force has long been exploring the way artificial intelligence (AI) can assist in its operations -- back in 2016 we saw combat AI beat some of the Air Force's top tactical experts, for example. Now, researchers are working on an autonomous drone designed to take down a piloted plane in air-to-air combat, with a showdown slated for July 2021. As reported by Air Force Magazine, the Air Force Research Laboratory (AFRL) has been developing an autonomous fighter jet since 2018, with plans to use machine-learning technology in less advanced planes initially -- such as the F-16 -- before graduating to newer models, such as the F-22 or F-35. Of course, details are a little hazy -- it's a military project after all and therefore subject to hefty classification. In a video, however, head of the Pentagon's Joint Artificial Intelligence Center Lt. Gen. Jack Shanahan said the AFRL is "pushing the boundaries" of AI in a military application, adding that the team is quietly confident that the "machine [will] beat the human."