A Simple Tactic That Could Help Reduce Bias in AI

That's an emerging conclusion of research-based findings -- including my own -- that could lead to AI-enabled decision-making systems being less subject to bias and better able to promote equality. This is a critical possibility, given our growing reliance on AI-based systems to render evaluations and decisions in high-stakes human contexts, in everything from court decisions, to hiring, to access to credit, and more. It's been well-established that AI-driven systems are subject to the biases of their human creators -- we unwittingly "bake" biases into systems by training them on biased data or with "rules" created by experts with implicit biases. Consider the Allegheny Family Screening Tool (AFST), an AI-based system predicting the likelihood a child is in an abusive situation using data from the same-named Pennsylvania county's Department of Human Services -- including records from public agencies related to child welfare, drug and alcohol services, housing, and others. Caseworkers use reports of potential abuse from the community, along with whatever publicly-available data they can find for the family involved, to run the model, which predicts a risk score from 1 to 20; a sufficiently high score triggers an investigation.

Fox News Flash top headlines are here. Check out what's clicking on Foxnews.com. A Minnesota beer brand is planning to reward one person's extremely questionable behavior with a ridiculous amount of free beer. Hamm's, which bills itself as "the beer … refreshing," has announced a contest to find the library-goer who hid several cans of Hamm's beer behind some paneling at a Washington state library some time in the 1980s. BUDWEISER WANTS TO BECOME UTAH'S STATE BEER News of the hidden stash recently made headlines after facilities workers at the Walla Walla Public Library discovered the beer -- which is estimated to be over 30 years old -- during a reorganizing of the facility.

Back in 2016, Juan Pablo Torres-Padilla, who has been the CEO of an artificial intelligence (AI) company in France and has held other key positions in the telecommunications and financial investment world, decided to take the opportunity to buy the historic Napa Valley 26 acre Sullivan Rutherford Estate from the Sullivan family, the custodians of that piece of land for over 40 years. It would prove to be a good partnership in terms of handing over the estate to someone who not only wanted to bring this winery more to the forefront of the Napa fine wine world but that the history and legacy would be appreciated and built upon. The estate lies on land that has a deep and rich history which goes back almost two centuries to 1821 when Mexico took over ownership of Napa Valley from Spain. Mexico divided the Napa Valley into two parts: Rancho Carne Humana in the North and Rancho Caymus in the South. Sullivan Rutherford Estate director of winemaking, Jeff Cole, said that they are "essentially in the middle of the heart of Napa Valley vineyards" since the back of the border of their estate is along the Rancho Caymus line as it is right in the middle of where the property lines of Rancho Caymus and Rancho Carne Humana meet.

AI Is All the Rage. So Why Aren't More Businesses Using It?

In late 2017, AB InBev, the Belgian giant behind Budweiser and other beers, began adding a little artificial intelligence to its brewing recipe. Using data collected from a brewery in Newark, New Jersey, the company developed an AI algorithm to predict potential problems with the filtration process used to remove impurities from beer. Paul Silverman, who runs the New Jersey Beer Company, a small operation not far from the AB InBev brewery, says his team isn't even using computers, let alone AI. "We sit around tasting beer and thinking about what to make next," he says. The divide between the two breweries highlights the pace at which AI is being adopted by US companies. With so much hype around artificial intelligence, you might imagine that it's everywhere.

Ask any brewer and they'll admit that while beer has likely been around since the dawn of civilization, we're all still learning new ways to brew it more efficiently, creatively, and quickly. But balancing the brewer's art with modern approaches to automation, measurement, and decision making requires brewers to toe a fine line. Take the personality out of the process, and you sacrifice the "craft" in craft beer. Ignore the best tools available, and you waste precious resources that could be better spent on the creative side of the brewing equation. From their outpost on the eastern edge of the Cascades in Bend, Oregon, Deschutes Brewery has tackled this problem in a forward-thinking way, embracing their brew team's passion for tech and programming. Through their operational technology team, they're using a cutting-edge approach to brewing technology aimed at saving time and money, making higher-quality beer, and in turn freeing up company resources for an aggressive innovation program.

Missing Cannes? Drink Like You're There With Rosé/Not Rosé – IAM Network

Cannes Lions, the glitzy celebration of all things advertising, had been set to take place next week. But when Covid-19 hit in the spring, advertising's biggest event of the year was canceled for 2020. But that hasn't stopped ad-tech firm Cognitiv from celebrating the festival's signature tipple.A tribute to HBO hit series Silicon Valley's Not Hotdog app, Cognitiv created its own Rosé/Not Rosé app to detect whether the drink in a user's hand is indeed rosé. The app, set to be released next week, draws on machine learning to pick out the beverage's light-pink hue--or lack thereof--from a user-submitted selfie.But while the app itself offers a bit of levity, the underlying programming was far from simple, Cognitiv CEO and co-founder Jeremy Fain told Adweek. "It's one thing to train a deep-learning algorithm to identify wine. It's totally another level to develop an algorithm that can accurately discern between rosé, red wine, white wine or water."

SpaceX launched a three-ton shipment to the International Space Station on Thursday, including "mighty mice" for a muscle study, a robot sensitive to astronauts' emotions and a miniature version of a brewery's malt house. The Dragon capsule also is delivering holiday goodies for the six station residents. NASA's Kenny Todd isn't giving any hints, but said, "Santa's sleigh, I think, is certified for the vacuum of space." The recycled capsule should arrive Sunday. The Falcon rocket blasted off from Cape Canaveral a day late because of high winds.

Read the New Short Story "A Priest, a Rabbi, and a Robot Walk Into a Bar"

Each month, Future Tense Fiction--a series of short stories from Future Tense and ASU's Center for Science and the Imagination about how technology and science will change our lives--publishes a story on a theme. Stop me if you've heard this one before." David had heard this one before, but he needed a job. He folded his hands in his lap and summoned the patience he'd learned sitting through Talmudic debates. He waved for Aiden Shure, Town of Our Own's CEO, to continue. "It's a dive bar, lots of rough language from the other patrons, but the bartender says, 'Father, what can I get you?' The priest says: 'Well, I have to lead Mass in the morning, but a wee nip can't hurt. Gimme three fingers of Irish whiskey and cut it with holy water.' So the bartender runs over to the church next door, borrows a bit of holy water, and makes the drink. The priest is satisfied, so the bartender moves on: 'Rabbi, what can I get you?' The rabbi says, 'Well it is the Sabbath day, but if it's not too much work I wouldn't say no to a glass of kosher wine from the vineyards of the Holy Land.' So the bartender finds a bottle of sweet Israeli red, and the rabbi thanks him." Aiden told the joke like he'd practiced it a lot while stuck in traffic. David braced for the punchline he knew was coming. "So the bartender turns to the robot, which has been quietly listening to the other patrons. 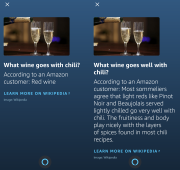 Alexa, Google Assistant, Siri, and Cortana can answer all sorts of questions that pop into users' heads, and they're improving every day. But what happens when a company like Amazon decides to crowdsource answers to fill gaps in its platform's knowledge? The result can range from amusing and perplexing to concerning. Alexa Answers allows any Amazon customer to submit responses to unanswered questions. When the web service launched in general availability a few weeks ago, Amazon gave assurances that submissions would be policed through a combination of automatic and manual review.

Robot hand is soft and strong

Fifty years ago, the first industrial robot arm (called Unimate) assembled a simple breakfast of toast, coffee, and champagne. While it might have looked like a seamless feat, every movement and placement was coded with careful consideration. Even with today's more intelligent and adaptive robots, this task remains difficult for machines with rigid hands. They tend to work only in structured environments with predefined shapes and locations, and typically can't cope with uncertainties in placement or form. In recent years, though, roboticists have come to grips with this problem by making fingers out of soft, flexible materials like rubber.