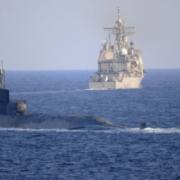 Dubai/Washington – An American nuclear-powered guided-missile submarine traversed the strategically vital waterway between Iran and the Arabian Peninsula on Monday, the U.S. Navy said, in a rare announcement that comes amid rising tensions with Iran. The Navy's 5th Fleet, based in Bahrain, said the Ohio-class guided-missile submarine USS Georgia, accompanied by two other warships, passed through the Strait of Hormuz, a narrow passageway through which a fifth of the world's oil supplies travel. The unusual transit in the Persian Gulf's shallow waters, aimed at underscoring American military might in the region, follows the killing last month of Mohsen Fakhrizadeh, an Iranian scientist named by the West as the leader of the Islamic Republic's disbanded military nuclear program. It also comes some two weeks before the anniversary of the American drone strike near Baghdad airport in Iraq that killed top Iranian military commander Gen. Qassem Soleimani on Jan. 3. Iran has promised to seek revenge for both killings. The Ohio-class ballistic-missile submarine's presence in Mideast waterways signals the U.S. Navy's "commitment to regional partners and maritime security with a full spectrum of capabilities," the Navy said, demonstrating its readiness "to defend against any threat at any time."