Working together, the universities will form The Institute for Learning-enabled Optimization at Scale (TILOS). The five-year research partnership will focus on the optimization of artificial intelligence (AI) and machine learning. They will work closely with industry leaders to develop optimization tools that will enable real-world improvements in key industries, including chip design, robotics, and communications networks. National University faculty will work with TILOS partners in workforce development and education to update and create career-relevant courses and modules in AI aimed at the growing population of adult learners served by the San Diego-based nonprofit institution, including career professionals, members of the military community, and underserved students in STEM). "We are thrilled to be collaborating with such incredible institutions on an initiative that directly serves our greater mission as an organization to prepare students today for the jobs of tomorrow," said National University System Chancellor and Interim President of National University Dr. Michael R. Cunningham.

Researchers are using artificial intelligence (AI) techniques to calibrate some of NASA's images of the Sun. Launched in 2010, NASA's Solar Dynamics Observatory (SDO) has provided high-definition images of the Sun for over a decade. The Atmospheric Imagery Assembly, or AIA, is one of two imaging instruments on SDO and looks constantly at the Sun, taking images across 10 wavelengths of ultraviolet light every 12 seconds. This creates a wealth of information of the Sun like no other, but like all Sun-staring instruments--AIA degrades over time, and the data needs to be frequently calibrated, NASA said in a statement. To overcome this challenge, scientists decided to look at other options to calibrate the instrument, with an eye towards constant calibration. 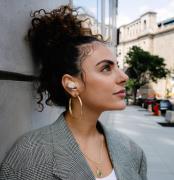 The new Klipsch T5II ANC earphones use AI for a seamless experience with advanced gestures. Klipsch, the great American speaker maker, has been helping audio enthusiasts to annoy their neighbors since 1949. The brand has an iconic status in the USA and has been at the forefront of so much pioneering audio technology thanks to founder Paul W Klipsch. The company is celebrating its 75th anniversary and, as part of the celebrations, it has announced two new pairs of true wireless earphones with active noise cancellation (ANC) technology and artificial intelligence. Klipsch claims both models have been designed to provide ultimate comfort and performance.

The future of healthcare chatbots: Physician replacement or enhancement?

While more healthcare providers turned to chatbots for patient triaging during the COVID-19 pandemic, researchers say the technologies powering these virtual assistants still need advancing before coming close to imitating a physician's brain, The Washington Post reported. Salt Lake City-based Intermountain Healthcare rolled out artificial intelligence chatbot Scout in March 2020 to navigate calls and concerns from people who were worried they had COVID-19. Health tech company Gyant created the chatbot. After a successful launch, the health system added a symptom-checker to the assistant in June 2020, which asks patients about 30 questions to narrow in on symptoms, such as how bad their headache is, and then set up an appointment or advise them to visit urgent care. Intermountain hopes to eventually add a way to have a "doctor's visit" with Scout, where the chatbot would provide care that is quickly reviewed and verified by a real, human physician, according to the report.

U.S. Northern Command (NORTHCOM) recently conducted a series of tests known as the Global Information Dominance Experiments, or GIDE, which combined global sensor networks, artificial intelligence (AI) systems, and cloud computing resources in an attempt to "achieve information dominance" and "decision-making superiority." According to NORTHCOM leadership, the AI and machine learning tools tested in the experiments could someday offer the Pentagon a robust "ability to see days in advance," meaning it could predict the future with some reliability based on evaluating patterns, anomalies, and trends in massive data sets. While the concept sounds like something out of Minority Report, the commander of NORTHCOM says this capability is already enabled by tools readily available to the Pentagon. General Glen VanHerck, Commander of NORTHCOM and North American Aerospace Defense Command (NORAD), told reporters at the Pentagon this week that this was the third test of GIDE, conducted in conjunction with all 11 combatant commands "collaborating in the same information space using the same exact capabilities." The experiment largely centered around contested logistics and information advantage, two cornerstones of the new warfighting paradigm recently proposed by the Vice Chairman of the Joint Chiefs of Staff.

The Pentagon is stealing a page from Minority Report with an experimental artificial-intelligence program that can look'days in advance' and predict possible attacks on vulnerable locations. The Global Information Dominance Experiments, or GIDE, use machine learning to sift through vast amounts of data to notice tiny changes that humans might miss - such as the number of cars increasing or decreasing in a parking lot - which might indicate an evolving threat. The program can then alert human agents who can take a closer look at the location. The latest experiment - GIDE 3 - focused on'contested logistics', in a scenario where lines of communication in the Panama Canal were compromised, military officials said. General Glen VanHerck, commander of the US Northern Command (NORTHCOM), said GIDE combines artificial intelligence and cloud computing resources with data from sources around the world to'achieve information dominance' and'decision-making superiority.'

Artificial Intelligence: The Terminator of Truth

The media ecosystem propagated by inhuman recommendation algorithms can easily be weaponized by bad faith actors, and there exist clear examples in which such tactics have been utilized for anti-democratic ends. In the 2016 United States presidential election, Russian operatives created fake social media accounts with the goal of exacerbating political polarization and increasing social discord. These accounts propagated provocative and misleading statements that intentionally targeted delicate subjects, specifically issues regarding race. Controversial and highly engaging content like this is exactly what the recommendation algorithms favor, and there is no doubt the technology helped circulate Russian disinformation, which ultimately affected the results of the election.

Twitter is offering a cash reward to users who can help it weed out bias in its photo-cropping algorithm. The social-media platform announced'bounties' as high as $3,500 as part of this week's DEF CON hacker convention in Las Vegas. 'Finding bias in machine learning models is difficult, and sometimes, companies find out about unintended ethical harms once they've already reached the public,' Rumman Chowdhury and Jutta Williams of Twitter's Machine-Learning, Ethics, Transparency and Accountability (META) project said in a blog post. 'We want to change that.' The challenge was inspired by how researchers and hackers often point out security vulnerabilities to companies, Chowdhury and Williams explained.

The US military's AI experiments are growing particularly ambitious. The Drive reports that US Northern Command recently completed a string of tests for Global Information Dominance Experiments (GIDE), a combination of AI, cloud computing and sensors that could give the Pentagon the ability to predict events "days in advance," according to Command leader General Glen VanHerck. It's not as mystical as it sounds, but it could lead to a major change in military and government operations. The machine learning-based system observes changes in raw, real-time data that hint at possible trouble. If satellite imagery shows signs that a rival nation's submarine is preparing to leave port, for instance, the AI could flag that mobilization knowing the vessel will likely leave soon. Military analysts can take hours or even days to comb through this information -- GIDE technology could send an alert within "seconds," VanHerck said.