Most Shocking Deepfake Videos Of 2021

Only, it was a deepfake. So was the video of Donald Trump taunting Belgium for remaining in the Paris climate agreement and Barack Obama's public service announcement as posted by Buzzfeed. These great examples of deepfakes are the 21st Century's answer to Photoshopped images and videos. Synthetic media, deepfakes, use artificial intelligence (AI) -- deep learning technology, to replace an existing person in an image or video with someone else. One reason for the widespread use of deepfake technology in popular celebrities is that these personalities have a large number of pictures available on the internet, allowing AI to train and learn from.

An AI voice generation method was used for the latest Anthony Bourdain documentary, and it aims to capture something that the late personality said, bordering greatly on deepfake. However, these words were never actually said on recording or any media by the late celebrity chef and are something which the director wants to be part of the film. Over the past months and during the pandemic, Deepfake has been used to bring fake news and mislead people into believing a lot of different things on the internet. It already caused alarm to the government, and some of which were taken down by social media platforms as they malign people. According to an interview by The New Yorker, Director Morgan Neville has revealed that he has used artificial intelligence to generate a copy of the voice of the late Anthony Bourdain, to be included in his film.

In a new documentary, Roadrunner, about the life and tragic death of Anthony Bourdain, there are a few lines of dialogue in Bourdain's voice that he might not have ever said out loud. Filmmaker Morgan Neville used AI technology to digitally re-create Anthony Bourdain's voice and have the software synthesize the audio of three quotes from the late chef and television host, Neville told the New Yorker. The deepfaked voice was discovered when the New Yorker's Helen Rosner asked how the filmmaker got a clip of Bourdain's voice reading an email he had sent to a friend. Neville said he had contacted an AI company and supplied it with a dozen hours of Bourdain speaking. " ... and my life is sort of shit now. You are successful, and I am successful, and I'm wondering: Are you happy?" Bourdain wrote in an email, and an AI algorithm later narrated an approximation of his voice.

Deepfake: A new formula for Phishing?

Phishing is the activity of a site appearing as another, and trying to deceive the user of the site into mistaking the attacker's site as the one the user wants to use. This has caused an infinite number of fraudulent transactions and other criminal activities. Now think what happens if the person that you think you are looking at in an online video, is not the same person at all. It is a digitally rendered copy of the person, however, this time it's not just a still, it's a moving, talking video of the person with features almost indistinguishable from the person that it is supposed to be. Read along to find more on what I'm talking about.

This isn't the first time that we must question whether "seeing" is in fact "believing" Earlier this week the YouTube channel Shamook highlighted the latest Deepfake technology in which scenes involving two notable characters in Rogue One: A Star Wars Story were greatly enhanced. This was the latest such use of Deepfakes in pop culture. What was impressive about this most recent use of the technology is that it made the character of Governor Tarkin seem more lifelike and more closely resembled Peter Cushing, the late actor who played the role originally in the 1977 film Star Wars. The same technology was previously employed earlier this year on the YouTube channel to "de-age" Robert De Niro and the results were far than what was actually seen in the Netflix original film The Irishman. Both of the "original" versions seem far more cartoony and fall into that "uncanny valley" of not being quite real.

A storyboard is a sequence of images to illustrate a story containing multiple sentences, which has been a key process to create different story products. In this paper, we tackle a new multimedia task of automatic storyboard creation to facilitate this process and inspire human artists. Inspired by the fact that our understanding of languages is based on our past experience, we propose a novel inspire-and-create framework with a story-to-image retriever that selects relevant cinematic images for inspiration and a storyboard creator that further refines and renders images to improve the relevancy and visual consistency. The proposed retriever dynamically employs contextual information in the story with hierarchical attentions and applies dense visual-semantic matching to accurately retrieve and ground images. The creator then employs three rendering steps to increase the flexibility of retrieved images, which include erasing irrelevant regions, unifying styles of images and substituting consistent characters. We carry out extensive experiments on both in-domain and out-of-domain visual story datasets. The proposed model achieves better quantitative performance than the state-of-the-art baselines for storyboard creation. Qualitative visualizations and user studies further verify that our approach can create high-quality storyboards even for stories in the wild.

Any business in its right mind should be painfully aware of how much money they could bleed via skillful Business Email Compromise (BEC) scams, where fraudsters convincingly forge emails, invoices, contracts and letters to socially engineer the people who hold the purse strings. And any human in their right mind should be at least a little freaked out by how easy it now is to churn out convincing deepfake videos – including, say, of you, cast in an adult movie, or of your CEO saying things that… well, they would simply never say. Well, welcome to a hybrid version of those hoodwinks: deepfake audio, which was recently used in what's considered to be the first known case of an AI-generated voice of a CEO to bilk a UK-based energy firm out of €220,000 (USD $243,000). The Wall Street Journal reports that some time in March, the British CEO thought he had gotten a call from the CEO of his business's parent company, which is based in Germany. Whoever placed the call sounded legitimate.

Aerial cinematography is revolutionizing industries that require live and dynamic camera viewpoints such as entertainment, sports, and security. However, safely piloting a drone while filming a moving target in the presence of obstacles is immensely taxing, often requiring multiple expert human operators. Hence, there is demand for an autonomous cinematographer that can reason about both geometry and scene context in real-time. Existing approaches do not address all aspects of this problem; they either require high-precision motion-capture systems or GPS tags to localize targets, rely on prior maps of the environment, plan for short time horizons, or only follow artistic guidelines specified before flight. In this work, we address the problem in its entirety and propose a complete system for real-time aerial cinematography that for the first time combines: (1) vision-based target estimation; (2) 3D signed-distance mapping for occlusion estimation; (3) efficient trajectory optimization for long time-horizon camera motion; and (4) learning-based artistic shot selection. We extensively evaluate our system both in simulation and in field experiments by filming dynamic targets moving through unstructured environments. Our results indicate that our system can operate reliably in the real world without restrictive assumptions. We also provide in-depth analysis and discussions for each module, with the hope that our design tradeoffs can generalize to other related applications. Videos of the complete system can be found at: https://youtu.be/ookhHnqmlaU. 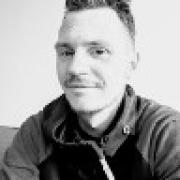 Artificial Intelligence is a real thing. The building blocks are readily available to anyone who can afford to rent GPU power and string together Python code. As technology advances and it becomes easier to manipulate the human form with AI, will Hollywood continue to exist? Will this new art form be distributed in a more democratic fashion? Or will Hollywood maintain its grasp on the film industry?

An imaginative bot that draws a picture from a dozen words

If you were asked to draw a picture of several people in ski gear, standing in the snow, chances are you'd start with an outline of three or four people reasonably positioned in the center of the canvas, then sketch in the skis under their feet. Though it was not specified, you might decide to add a backpack to each of the skiers to jibe with expectations of what skiers would be sporting. Finally, you'd carefully fill in the details, perhaps painting their clothes blue, scarves pink, all against a white background, rendering these people more realistic and ensuring that their surroundings match the description. Finally, to make the scene more vivid, you might even sketch in some brown stones protruding through the snow to suggest that these skiers are in the mountains. Now there's a bot that can do all that.