Russian forces in Kherson alert as Ukraine plans next move 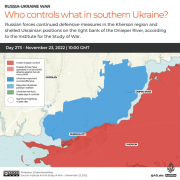 After recapturing Kherson city, Ukraine kept Russian forces guessing about their next move, pinning down occupying troops in defensive positions and rendering them unavailable for offensive operations. Some 30,000 Russian troops that withdrew from the west bank of the Dnieper river earlier this month were entrenching themselves in the Zaporizhia and Kherson regions during the 39th week of the war, deputy head of Ukrainian military intelligence Major-General Vadym Skibitskyi, told the Kyiv Post. "[The Russians] are waiting for our liberation offensive, that's why they have created a defensive line in Kherson, another on the administrative border of [Kherson and] Crimea, and another in the northern Crimea region," Skibitskiy said. "The enemy is on the defensive in the Zaporizhzhia direction," said Ukraine's general staff. "In the Kryvyi Rih and Kherson directions, the enemy is creating an echeloned defence system, improving fortification equipment and logistical support of advanced units, and not stopping artillery fire at the positions of our troops and settlements on the right bank of the Dnipro River."

Pro-Kremlin officials were pulling out of the key southern Ukraine city of Kherson on Wednesday, as Kyiv's forces advanced on territory in Russian hands since the war's earliest days. Kherson was the first major city to fall to Moscow's troops after the February invasion and retaking it would be a major prize in Ukraine's ongoing counter-offensive. Kyiv's recapturing of swathes of its territory in the east and parts of the south has however been followed by punishing missile and drone strikes that have demolished large parts of Ukraine's power grid ahead of winter. "The entire administration is already moving today," to the left bank of the Dnieper river, the region's Moscow-installed head Vladimir Saldo, said on Russian state television. The city is located on the western bank of the Dnieper, the same side where Ukrainian troops have been moving forward in a counter-offensive that began in August.

Ukraine destroyed a series of Russian ordnance depots in the 20th week of the war, demonstrating the efficiency of US-supplied HIMARS (High Mobility Artillery Rocket System) rocket systems and other Western systems, and worrying Russian military observers. These Ukrainian attacks appear to be part of preparations for a summer counteroffensive in the southern Kherson and Zaporizhia districts, which border Crimea. Ukraine said it destroyed a key Russian command post in Kherson district along with a weapons arsenal, killing 12 Russian soldiers on July 10. Its armed forces posted drone footage of a depot in flames. Two days later, Ukraine said it had struck another Russian ammunition depot in Nova Kakhovka, also in Kherson oblast, this time killing 52 soldiers.