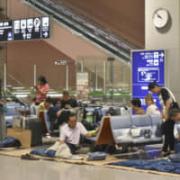 In what is likely a warning to nuclear-armed North Korea, the U.S. military on Wednesday showed off to media its Global Hawk surveillance drone, which is temporarily deployed to its Yokota Air Base in western Tokyo. The massive drone, with a wingspan of about 40 meters and a length of about 15 meters, can fly for long durations at altitudes higher than manned aircraft. The main focus of the deployment is believed to be to collect surveillance data on the North's nuclear- and missile-related facilities as well Chinese military activity in the Western Pacific. The aircraft is one of five Global Hawks sent to Yokota from their home base in Guam to avoid the harsh summer typhoon season that annually hits the Pacific island. The drones are scheduled to operate out of Yokota until the end of October.