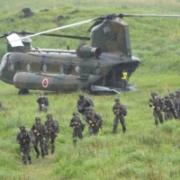 The Defense Ministry will seek another record budget of over ¥5.4 trillion ($49 billion) for fiscal 2022, aiming to beef up its capabilities around remote southwestern islands to counter China's growing naval activities, government sources have said. The request would exceed the ministry's highest-ever ¥5.3 trillion initial budget for fiscal 2021, which started in April, and also reflects an increase in the cost to develop cutting-edge technologies, such as unmanned aircraft using artificial intelligence, the sources said Thursday. The defense budget could further expand, possibly topping 1% of Japan's gross domestic product, when it is finalized in December, as the request excludes outlays linked to hosting U.S. military bases. Japan's defense budget has long stayed at around 1% of its GDP, in light of the country's postwar pacifist Constitution and since the Cabinet decided in 1976 that the outlays should not exceed 1%. The last time the defense expenditure exceeded 1% was in fiscal 2010, when the GDP shrank sharply following the 2008-2009 global financial crisis.

We present ProxiModel, a novel event mining framework for extracting high-quality structured event knowledge from large, redundant, and noisy news data sources. The proposed model differentiates itself from other approaches by modeling both the event correlation within each individual document as well as across the corpus. To facilitate this, we introduce the concept of a proximity-network, a novel space-efficient data structure to facilitate scalable event mining. This proximity network captures the corpus-level co-occurence statistics for candidate event descriptors, event attributes, as well as their connections. We probabilistically model the proximity network as a generative process with sparsity-inducing regularization. This allows us to efficiently and effectively extract high-quality and interpretable news events. Experiments on three different news corpora demonstrate that the proposed method is effective and robust at generating high-quality event descriptors and attributes. We briefly detail many interesting applications from our proposed framework such as news summarization, event tracking and multi-dimensional analysis on news. Finally, we explore a case study on visualizing the events for a Japan Tsunami news corpus and demonstrate ProxiModel's ability to automatically summarize emerging news events.