AI expert: Europe is lagging far behind in AI development, threatening its security

Artificial intelligence is defined as systems that do not operate according to a designed algorithm but are able to learn from new data. The fact that European policymakers have turned their eyes to the challenges of applying AI technologies is an important step forward, according to Jokūbas Drazdas, director of UAB Acrux Cyber Service, a Lithuanian IT company specialising in AI and cyber security. Europe is lagging far behind the US and China in the development and deployment of AI. In 2020, only 7% of European companies were using AI systems. The US and China are currently trying to accelerate the use of AI in the public and private sectors.

AI being used to grow tomatoes

Five teams from the Netherlands, South Korea and China have advanced to the final stage of a competition to see who can grow fresh tomatoes in greenhouses remotely using artificial intelligence. The second Autonomous Greenhouse Challenge, which is organised by Dutch academic powerhouse Wageningen University & Research (WUR) and Chinese multinational conglomerate Tencent, began in September with a 24-hour hackathon involving 21 international teams and more than 200 participants from 26 countries. The five winning teams – Netherlands-based AiCU, The Automators and Automatoes, China'sIUA.CAAS and Korea'sDigilog – will each be given six months' access to a real greenhouse in the Dutch town of Bleiswijk, where from December onwards they will attempt to control and produce a tomato crop from afar by employing AI algorithms to keep inputs like water, nutrients and energy at sustainable levels. September's hackathon, held at WUR, saw an international jury award points to each team based on their composition and competence, their application of AI technology and the net profit they made during a virtual tomato production game. During their pitches, the teamswere given access to a climate model and a tomato crop growth model previously developed by researchers at WUR.

Robot can fly, swim or hitch a ride by sticking to other objects

A robotic drone that can travel through air and water, and also attach itself to larger objects with a suction cup, could be useful for tagging wild animals, say its creators. The suction cup is inspired by the remora fish, which attaches itself to larger marine creatures in a symbiotic relationship where the remora eats parasites that would irritate its host and also gets a ride in return. "My original thought was'let's find a point where we can beat nature'," says Li Wen at Beihang University in Beijing. "Let's do a robot that can not only swim and stick underwater, but also can fly into the air and stick in the air. I don't think there are any animals that can do this."

The Download: The grim spread of the Buffalo shooting video, and crypto's tough test

Although Twitch took down the livestream within two minutes from the start of the attack, a recording of the video was swiftly posted on a site called Streamable. That video was viewed more than 3 million times before it was taken down, according to the New York Times. Links to the recording were shared across Facebook and Twitter, and another clip that purported to show the gunman firing at people in the supermarket was visible on Twitter more than four hours after being uploaded. Additionally, TikTok users shared search terms that would take viewers to the full video on Twitter, according to Washington Post reporter Taylor Lorenz. Although Twitch removed the livestream in less time than the 17 minutes it took Facebook to take down the live broadcast of the 2019 mosque shooting.

There's no lack of startups around the world trying to make industrial activities more efficient with artificial intelligence. Some invent robots to assist or replace manual labor, while others use machine learning to help businesses discover insights. Synergies Intelligent Systems falls into the second category. Michael Chang founded Synergies in 2016 in Boston to provide easy-to-use AI-powered analytics tools to medium-sized manufacturers. Having worked at Foxconn in Shenzhen in the late 2000s helping the Apple supplier improve yield rate, or reduce the percentage of defective products, using data analysis, Chang realized that not every factory has the financial prowess to spend tens of thousands of dollars on digitization.

A research collaboration between China and the UK has devised a new method to reshape faces in video. The technique allows for convincing broadening and narrowing of facial structure, with high consistency and an absence of artifacts. From a YouTube video used as source material by the researchers, actress Jennifer Lawrence appears as a more gaunt personality (right). See the accompanying video embedded at the bottom of the article for many more examples at better resolution. This kind of transformation is usually only possible through traditional CGI methods that would need to entirely recreate the face via detailed and expensive motion-capping, rigging and texturing procedures. Instead, what CGI there is in the technique is integrated into a neural pipeline as parametric 3D face information that's subsequently used as a basis for a machine learning workflow.

China has developed a remote sensing satellite powered by the latest artificial intelligence technology that helps the People's Liberation Army (PLA) trace the movements of U.S. aircraft carriers. A new study by Chinese space scientists said the technology was put into use last year in June to detect the movements of the USS Harry S. Truman. The satellite, which has not been named in the study, is said to have alerted Beijing with the precise coordinates of the carrier as it headed to a strait transit drill off the coast of Long Island in New York, reported South China Morning Post. According to the study published by the domestic peer-reviewed journal Spacecraft Engineering last month, the drill held on June 17 involved a joint action of seven warships and planes beside the USS Harry S Truman. Before this satellite, the PLA had to go through a large amount of raw satellite data on the ground to get a clue about such drills happening in the U.S. home waters, and the results usually came after the event was over, the report added. But, with the AI-powered satellites, China could now "live stream" military activities or assets of interest on the other side of the planet, the report quoted the study by space scientist Yang Fang and her colleagues with DFH Satellite. 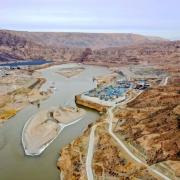 Artificial intelligence at the heart of the project on the Tibetan plateau will build the structure slice by slice, with no human workers.

Beijing – From quoting the national anthem to referencing Hollywood blockbusters and George Orwell's dystopian novel "1984," Chinese web users are using creative methods to dodge censorship and voice discontent over COVID-19 measures. China maintains a tight grip over the internet, with legions of censors scrubbing out posts that cast the Communist Party's policies in a negative light. The censorship machine is now in overdrive to defend Beijing's stringent "COVID zero" policy as the business hub of Shanghai endures weeks of lockdown to tackle an outbreak. Stuck at home, many of the city's 25 million residents have taken to social media to vent fury over food shortages and spartan quarantine conditions. Charlie Smith, co-founder of censorship monitoring website GreatFire.org, said the Shanghai lockdown had become "too big of an issue to be able to completely censor."