The UK's data watchdog has fined a facial recognition company £7.5m for collecting images of people from social media platforms and the web to add to a global database. The Information Commissioner's Office (ICO) also ordered US-based Clearview AI to delete the data of UK residents from its systems. Clearview AI has collected more than 20bn images of people's faces from Facebook, other social media companies and from scouring the web. John Edwards, the UK information commissioner, said Clearview's business model was unacceptable. "Clearview AI Inc has collected multiple images of people all over the world, including in the UK, from a variety of websites and social media platforms, creating a database with more than 20bn images," he said. "The company not only enables identification of those people, but effectively monitors their behaviour and offers it as a commercial service.

Instagram and Facebook users in Texas lost access to certain augmented reality filters Wednesday, following a lawsuit accusing parent company Meta of violating privacy laws. In February, Texas Attorney General Ken Paxton revealed he would sue Meta for using facial recognition in filters to collect data for commercial purposes without consent. Paxton claimed Meta was "storing millions of biometric identifiers" that included voiceprints, retina or iris scans, and hand and face geometry. Although Meta argued it does not use facial recognition technology, it has disabled its AR filters and avatars on Facebook and Instagram amid the litigation. The AR effects featured on Facebook, Messenger, Messenger Kids, and Portal will also be shut down for Texas users.

On March 1, Chechnya's leader Ramzan Kadyrov posted a short video on Telegram, in which a cheery bearded soldier stood before a line of tanks clanking down a road under an overcast sky. In an accompanying post, Kadyrov assured Ukrainians that the Russian army doesn't hurt civilians and that Vladimir Putin wants their country to determine its own fate. In France, the CEO of a law enforcement and military training company called Tactical Systems took a screenshot of the soldier's face and got to work. Within about an hour, using face recognition services available to anyone online, he identified that the soldier was likely Hussein Mezhidov, a Chechen commander close to Kadyrov involved in Russia's assault on Ukraine, and found his Instagram account. "Just having access to a computer and internet you can basically be like an intelligence agency from a film," says the CEO, who asked to be identified as YC to avoid potential repercussions for his sleuthing.

The Hidden Role of Facial Recognition Tech in Many Arrests

In April 2018, Bronx public defender Kaitlin Jackson was assigned to represent a man accused of stealing a pair of socks from a TJ Maxx store. The man said he couldn't have stolen the socks because at the time the theft occurred, he was at a hospital about three-quarters of a mile away, where his son was born about an hour later. Jackson couldn't understand how police had identified and arrested her client months after the theft. She called the Bronx District Attorney's Office, and a prosecutor told her police had identified her client from a security camera photo using facial recognition. A security guard at the store, the only witness to the theft, later told an investigator from her office that police had sent him a mugshot of her client and asked in a text message "Is this the guy?" Jackson calls that tactic "as suggestive as you can get."

Original article by Azfar Adib, who is currently pursuing his PhD in Electrical and Computer Engineering in Concordia University in Montreal. He is a Senior Member in the Institute of Electrical and Electronic Engineers (IEEE). A recent announcement by Meta about terminating the face recognition system in Facebook sparked worldwide attention. It comes as a sort of new reality for many Facebook users, who have been habituated for years to the automatic people recognition feature in Facebook photos and videos. Since the arrival of mankind on earth, facial outlook has remained as the most common identifier for humans. 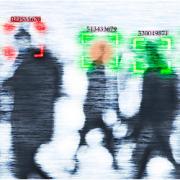 George Orwell's novel 1984 got one thing wrong. A surveillance state will not have people watching people, as the Stasi did in East Germany. Computers will be the ones watching people. Technology lets you perform surveillance at an industrial scale. This is already happening in China, where facial recognition software is being used by law enforcement for catching relatively minor offenders such as jaywalkers to enabling much more disturbing activities such as tracking Uyghurs.

Artificial intelligence can accurately remove tattoos from photos of people's faces – potentially helping face recognition systems, which can be flummoxed by such tattoos, work accurately. In previous research, Mathias Ibsen at Darmstadt University of Applied Sciences in Germany and his colleagues had identified that face painting and tattoos can impair the performance of face recognition systems.

The US national tax authority announced Monday that it will stop using facial recognition software to verify taxpayers' identities when they create online accounts, following a chorus of privacy concerns. Internal Revenue Service officials had put forth the authentication system as a security measure following years of growing fears over online scams and identity theft, but the program ended up also prompting worries. The initiative involved identity verification company ID.me, which won a nearly $90 million contract to make taxpayers' accounts more secure. The IRS said "it will transition away from using a third-party service for facial recognition to help authenticate people creating new online accounts." "The IRS will quickly develop and bring online an additional authentication process that does not involve facial recognition," it said, as the agency faces staffing shortages and significant backlogs.

A police officer is at the scene of a murder. No obvious suspects or motives. DNA from the cells of one strand is copied and compared against a database. No match comes back, and the case goes cold. Corsight AI, a facial recognition subsidiary of the Israeli AI company Cortica, purports to be devising a solution for that sort of situation by using DNA to create a model of a face that can then be run through a facial recognition system.

With tax season upon us, the IRS is pushing individuals to submit to facial recognition in exchange for being able to complete a range of basic tax-related activities online. The IRS has retained a private firm--ID.me The IRS is not the only government agency working with ID.me. The company claims to serve "27 states, multiple federal agencies, and over 500 name brand retailers." This is alarming for several reasons.