Tesla will build a vehicle dedicated for use as a robotaxi, and it will start making three new vehicles next year, CEO Elon Musk told fans at a party celebrating the opening of a Texas factory. Musk didn't give details of the robotaxi other than to say it will "look quite futuristic." He also said Tesla will start building the Cybertruck pickup at its new factory near Austin, Texas, next year. After that, it will start building a new Roadster and an electric semi, he said. He made his remarks Thursday night at the "Cyber Rodeo at Giga Texas," an invitation-only party for thousands of guests at Tesla's new billion-dollar-plus factory.

Tesla is recalling nearly 54,000 cars and SUVs because their "Full Self-Driving" software lets them roll through stop signs without coming to a complete halt. Recall documents posted Tuesday by U.S. safety regulators say that Tesla will disable the feature with an over-the-internet software update. The "rolling stop" feature allows vehicles to go through intersections with all-way stop signs at up to 5.6 miles (9 kilometers) per hour. The recall shows that Tesla programmed its vehicles to violate the law in most states, where police will ticket drivers for disregarding stop signs. The Governors Highway Safety Association, which represents state highway safety offices, said it is not aware of any state where a rolling stop is legal.

Why We Need More Women Of Color In Tech

And implicit bias can show up in other forms of artificial intelligence software. A ProPublica investigation found that software by Northpoint, a consulting and research firm, used to predict the likelihood that criminal defendants would become repeat offenders overestimated risk for Black people and underestimated risk for white people. Black defendants were "77 percent more likely to be pegged as at higher risk of committing a future violent crime" than white defendants, according to the organization's research.

Facebook's Facial Recognition Technology Will No Longer Default To 'On' 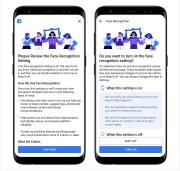 "This biometric data is so sensitive that if it is compromised, there is simply no recourse," Shawn Williams, a lawyer for plaintiffs in the class action suit, told Reuters in August. "It's not like a Social Security card or credit card number where you can change the number.

The city started using the cameras in areas with high crime rates, such as gas stations and outside liquor stores. But earlier this year, public housing officials installed Project Green Light cameras in a senior citizens' community, said Sandra Henriquez, executive director of the Detroit HousingCommission. She said the cameras themselves are not equipped with facial recognition software.

The federal business watchdog will reportedly find that Facebook deceived users about how it handled phone numbers it asked for as part of a security feature and provided insufficient information about how to turn off a facial recognition tool for photos.

Thiel's criticism appears to refer to Google's 2018 decision not to renew its contract with the Department of Defense, which allowed the agency to review drone footage with the company's artificial intelligence tools. The same year, Google faced backlash for working on "Dragonfly," a project to create a censored search engine for China. However, in December, CEO Sundar Pichai announced there were no plans to launch it.

Facebook Goes Back To Its Roots With Dating App Feature

Unfortunately for singletons in the United States, Facebook will not expand this feature to the U.S. until the end of 2019. So, even though the platform originated in the States and was born out of a desire to connect with others ― both romantically and otherwise -- we will have to suffer through a few more months sans Facebook's intervention in our love lives.

Google Employees Who Organized Mass Walkout Say They're Being Retaliated Against

Google employees Meredith Whittaker and Claire Stapleton made the allegations in a letter sent to co-workers on Monday. Whittaker says Google dramatically changed her role at the company after the rally by disbanding an artificial intelligence ethics council she co-founded. And despite years of high performance reviews, Stapleton was demoted and told to take leave.