Large-scale general AI implementations serve as great building blocks for solving certain B2B problems, and most organizations have already or are in the process of leveraging them. However, the desire for immediate RoI, creating fail-fast prototypes, and delivering decision-centric outcomes are driving the need for domain-specific AI initiatives. Use cases and subject matter expertise help, but data scientists and analysts need to adapt the AI implementation cycle to resolve problems that require more specificity and relevancy. The biggest hurdle anyone would encounter while building such AI models is finding quality, domain-specific data. Here are some best practices and techniques for domain-specific model adaptation that worked for us time and again.

As the American Society of Quality reports, many organizations have quality-related costs of up to 40% of their total production revenue. A large part of this cost comes from the inefficiency of manual inspection, which is the most common way to provide quality control in manufacturing. The application of artificial intelligence for quality control automation presents a more productive and accurate way of doing a visual inspection of production lines. However, traditional machine learning methods present several limitations to how we can train and utilize models for defect detection. So in this article, we'll discuss the advantages of unsupervised learning for defect detection, and elaborate on the approaches MobiDev uses in our practical experience. AI defect detection is based on computer vision that provides capabilities for automating the whole AI quality inspection process using machine learning algorithms.

The Future of Generative Adversarial Networks in Deepfakes - Metaphysic.ai

In the image above, we see examples of'frontalization' under OSFR, where the system fails (bottom row) to infer an authentic likeness from an'off-center' angle in a source photograph, and where the degree of occlusion (i.e., how far the subject is looking away from camera) seems to accord directly with the degree of inaccuracy in the final result. Fed into the ClarifAI celebrity face recognition engine, the frontalized synthetic image of Mathew Rhys (top row, second from right) scores a respectable 0.061 likelihood of being an image of the actor; however, the frontalized Ursula Andress (bottom row, second from right), whose input source image (bottom left) is at a pretty acute 45-50 angle from the camera, is interpreted by ClarifAI as singer Kacey Musgraves (0.089 probability). The pose transformations in OSFR are not informed by multiple views, but rather inferred from generic pose knowledge across multiple identities (in datasets such as CelebA-HQ, a typical training source in a wide-ranging GAN framework). Likewise, expression transformations are powered by'baseline' transformations that are not specific to the identity in an image that you might want a GAN to alter, and therefore cannot take account of the unpredictable ways that the resting human face will distort and transform across a range of expressions. Most GAN initiatives that attempt expression alterations publish test results of'unknown' subjects, where it's not possible for the viewer to know whether the expressions are faithful to the source identity. 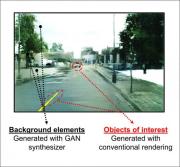 Within the center (b), we see that cGAN fails to acquire ample definition for the important parts, vehicles and street markings. Within the proposed blended output (a), automobile and street definition is nice, while the ambient surroundings is various and photorealistic. The paper concludes by suggesting that the temporal consistency of the GAN-generated part of the rendering pipeline may very well be elevated by means of using bigger city datasets, and that future work on this course may supply an actual different to pricey neural transformations of CGI-based streams, whereas offering larger realism and variety. 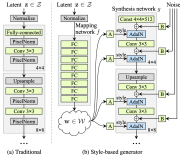 SyleGAN is about understanding (and controlling) the image synthesis process in the generator of convolutional GANs. More specifically, this paper aims to improve the distribution quality, interpolation properties, and latent space entanglement. Inspired by the style transfer literature, the authors propose some changes to the generator architecture. An affine transformation can be computed from W, to directly control the adaptive instance normalization (AdaIN) after each convolution. Thus, W will be encouraged, through the affine transform parameters, to specialize in different styles.

Qing Li is currently a Chair Professor at the Hong Kong Polytechnic University. He also serves/served as a Guest Professor of Zhejiang University, an Adjunct Professor of the University of Science and Technology of China, and a Visiting Professor at the Wuhan University and the Hunan University. His research interests include database modeling, multimedia retrieval and management, social media computing and e-learning systems. Dr. Li has published over 400 papers in technical journals and international conferences in these areas, and is actively involved in the research community by serving as a journal reviewer, program committee chair/co-chair, and as an organizer/co-organizer of numerous international conferences. Currently he is the Chairman of the Hong Kong Web Society, a councillor of the Database Society of Chinese Computer Federation (CCF), a member of the CCF Big Data Experts Committee, and a member of the international WISE Society's steering committee.

While labeled data is expensive to prepare, ever increasing amounts of unlabeled data is becoming widely available. In order to adapt to this phenomenon, several semi-supervised learning (SSL) algorithms, which learn from labeled as well as unlabeled data, have been developed. In a separate line of work, researchers have started to realize that graphs provide a natural way to represent data in a variety of domains. Graph-based SSL algorithms, which bring together these two lines of work, have been shown to outperform the state-of-the-art in many applications in speech processing, computer vision, natural language processing, and other areas of Artificial Intelligence. Recognizing this promising and emerging area of research, this synthesis lecture focuses on graph-based SSL algorithms (e.g., label propagation methods).

Unsupervised Learning: 14 of the Most Important Algorithms