The latest iteration of Amazon's battery-powered Ring doorbell adds a new feature to capture the early details of events most competitors would miss without needing to be plugged in. It tops Ring's battery-powered range, which starts at £89. The look and basic function of the Doorbell 4 is very similar to Ring's older models. It has a camera with night vision, motion sensors and a large doorbell button. When someone pushes the button Ring's signature chime plays and an alert is sent to your phone. You can view a live feed and speak through the doorbell using the app from anywhere with internet.

LG has unveiled the specs of its mid-tier smartphone Q and K series line-up that will launch at Mobile World Congress (MWC) where it will unveil its G8 ThinQ and V50 ThinQ flagship smartphones. All three will have AI camera features from the previous generation of high-end phones, fingerprint recognition, as well as Google Assistant. They will all support LTE. All three phones will also have DTS:X which provides surround sound of up to 7.1 channels. The Q60 will be 161.3x77x8.7mm in size, and is powered by a 2.0GHz octa-core processor with 3GB of RAM, and 64GB of storage. 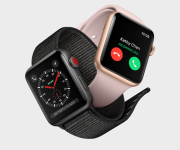 It's been a week since the Apple Watch Series 3 was revealed, and reviews of the wearable device have poured in -- pointing out the good and bad. The Apple Watch Series 3's major boost from previous models is its support for cellular LTE. However, the Wall Street Journal's Joanna Stern said there were issues with connectivity during the week in which she tested out the new models. Stern also said there were problems with Series 3's battery life. "You're lucky if the battery allows you to roam on cellular for longer than half a day--especially if you're making calls.