Angelina Jolie and Senator John McCain recently penned a joint op-ed piece for the New York Times. In their lengthy article, Jolie and McCain asked Americans, as well as the U.S. government, to help save the Rohingya Muslims. "Around the world, there is profound concern that America is giving up the mantle of global leadership. Our steady retreat over the past decade has contributed to a wide array of complex global challenges – a dangerous erosion of the rule of law, gross human rights violations and the decline of the rules-based international order that was designed in the aftermath of two world wars to prevent conflict and deter mass atrocities," they wrote. Jolie and McCain also cited a lack of diplomacy in Myanmar, which has led to the fleeing of approximately 680,000 Rohingya Muslims.

Fact check: Is there a link between media violence and mass shootings?

But Dr. Louis Kraus, a child psychiatrist, calls that approach a "red herring." Gaming fans wearing VR goggles play "Echo Arena" from Oculus at the E3 conference in Los Angeles. In the wake of the Florida school shooting, politicians have raised concern over the influence of violent video games and films on young people, with President Trump claiming they're "shaping young people's thoughts." Scientists still debate the issue, but the majority of studies show that extensive exposure to media violence is a risk factor for aggressive thoughts, feelings and behaviors. But there's less consensus on whether media violence is a risk factor for criminal violence, which is a more serious form of aggression in which the perpetrator is subject to arrest and incarceration -- the sort of violence that includes using a weapon to harm or kill people. 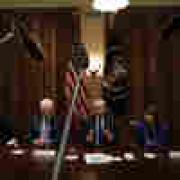 Culture crusaders: who's who in Trump's gun violence roundtable

As Donald Trump convenes a meeting on Thursday to address violence in video games, in the wake of last month's Florida school shooting, those in attendance will include a group that argues the Muppets drink too much, and another committed to exposing strident liberal bias on television. The president's round table at the White House will be the latest in a series of discussions on school safety after a gunman left 17 dead at Marjory Stoneman high school in Parkland on 14 February. And although representatives of the mainstream Entertainment Software Association and executives from other gaming parent companies are slated to attend, they will be seated across from a bevy of culture crusaders who have sought to tie mass shootings to violence in video games and movies – despite decades of research failing to produce such a link. In attendance will be retired Lt Col Dave Grossman, the author of Assassination Generation: Video Games, Aggression, and the Psychology of Killing, a book that purports to "reveal how violent video games have ushered in a new era of mass homicide". Grossman characterizes himself as an expert in "killology".

Donald Trump will host executives from the video game industry at the White House on Thursday, resurrecting a debate over the link between violent video games and gun-related deaths in the aftermath of the Parkland high school shooting. The meeting comes as the president and lawmakers in Washington face continued pressure to act in the wake of the 14 February massacre at Marjory Stoneman High School, which left 17 people dead. Although the White House has provided few details on the meeting, Trump's focus on the role of violence in entertainment signaled the president may be embracing a more conservative response to the Parkland shooting, even as the push for stricter gun laws reaches a fever pitch. Each time there's a school shooting in America, someone inevitably points the finger at video games. Trump similarly targeted video games and movies for influencing children and young adults when discussing the Parkland tragedy at the White House last month.

The Morning After: What's next for Netflix, the future of Windows 10 S

Amazon has fortunately fixed it. If you have an Alexa-powered device, you'd be forgiven for thinking it was haunted: Users have been complaining that their devices would laugh randomly or simply refuse to do what they were asked. Is your smart speaker going to murder you in your sleep? Amazon was made aware of the weirdness and is taking steps to make its virtual-assistant's reaction a little more complicated. Instead of "Alexa, laugh", you'll have to make the request into an entire sentence, and Alexa will confirm your weird command first.

President Trump is set to pit the video game industry against some of its harshest critics at a White House meeting on Thursday that's designed to explore the link between violent games, guns and tragedies such as last month's shooting in Parkland, Fla. Following the attack at Marjory Stoneman High School, which left 17 students dead, Trump has said violent games are "shaping young people's thoughts." The president has proposed that "we have to do something about maybe what they're seeing and how they're seeing it." Trump has invited video game executives like Robert Altman, the CEO of ZeniMax, the parent company for games such as Fallout; Strauss Zelnick, the chief executive of Take Two Interactive, which is known for Grand Theft Auto, and Michael Gallagher, the leader of the Entertainment Software Association, a Washington-focused lobbying organization for the industry. Three people familiar with the White House's planning, but not authorized to speak on the record, confirmed those invitees.

Pepe The Frog creator sues InfoWars for breach of copyright

Pepe The Frog's creator is suing US right-wing media platform InfoWars for copyright infringement. Illustrator Matt Furie is bidding to reclaim his amphibian character after it was co-opted online as a popular meme associated with white supremacy and neo-Nazi values by members of the so-called alt-right. The lawsuit, filed with a federal court in California, seeks damages from the Alex Jones-fronted brand over a poster featuring the allegedly unauthorised image of Pepe alongside Jones, Donald Trump and a number of other prominent anti-establishment right-wing figures, including Milo Yiannopoulos, Ann Coulter, Matt Drudge and Roger Stone. The poster's slogan reads "MAGA", an acronym standing for President Trump's 2016 campaign slogan "Make America Great Again." Furie's lawyers allege InfoWars used the character's likeness without prior authorisation and made the poster available for purchase in its online store without permission.