Why AI Could Be Entering a Golden Age - Knowledge@Wharton

The quest to give machines human-level intelligence has been around for decades, and it has captured imaginations for far longer -- think of Mary Shelley's Frankenstein in the 19th century. Artificial intelligence, or AI, was born in the 1950s, with boom cycles leading to busts as scientists failed time and again to make machines act and think like the human brain. But this time could be different because of a major breakthrough -- deep learning, where data structures are set up like the brain's neural network to let computers learn on their own. Together with advances in computing power and scale, AI is making big strides today like never before. Frank Chen, a partner specializing in AI at top venture capital firm Andreessen Horowitz, makes a case that AI could be entering a golden age.

Skynet it ain't: Deep learning will not evolve into true AI, says boffin

Deep learning and neural networks may have benefited from the huge quantities of data and computing power, but they won't take us all the way to artificial general intelligence, according to a recent academic assessment.

The AI does not hate you, nor does it love you, but you are made out of atoms which it can use for something else.

Newer technologies such as Artificial Intelligence (AI), robotics and automation, 3D printing, mixed reality that combines virtual reality and augmented reality, and blockchain are not only disrupting and transforming business models and the lives of individuals, but also ushering in the so-called gig economy which envisages an environment in which temporary positions are common and organizations engage independent workers on short-term contracts. Lounge takes a look at how these technologies will affect us in the years to come. 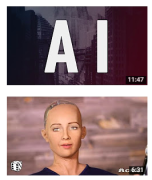 Artificial General Intelligence (AGI) will likely be achieved in less than 50 years, according to latest KDnuggets Poll. The median estimate from all regions was 21-50 years, except in Asia where AGI is expected in 11-20 years.

The First Conference on Artificial General Intelligence (AGI-08) was held on March 1-3, 2008, at the University of Memphis. The overall goal of the conference was to work toward a common understanding of the most promising paths toward creating AI systems with general intelligence at the human level and beyond and to share interim results and ideas achieved by researchers actively working toward powerful artificial general intelligence. This proved harder than anticipated, and over the following decades most research activity in the field shifted toward the creation of computer programs solving specific sorts of problems that humans find to require intelligence. This more task-focused "narrow AI" work that has come to dominate the field has yielded a variety of theoretical and practical successes, but there is no real consensus regarding the relation of this work with the original goal of creating powerful general intelligence at the human level and beyond. In the last few years, an increasing number of AI researchers have come to feel the time is ripe for a renewed focus on the original goals of the AI field; and this was the motivation for the convening of the First Conference on Artificial General Intelligence (AGI-08), which was held at the FedEx Institute at University of Memphis in early March 2008.

The conference was chaired by Marcus Hutter and cochaired by Eric Baum and Emanuel Kitzelmann. The conference also provided a venue for the awarding of the 2010 Kurzweil Prizes. The conference was dedicated to the memory of the recently deceased AI pioneer Ray Solomonoff, whose wife Grace attended the conference and gave a very moving presentation on Ray's life and work. The AGI conferences are the only major conference series devoted wholly and specifically to the creation of AI systems possessing general intelligence at the human level and ultimately beyond. Sponsored by AAAI, KurzweilAI.net, and the Università della Svizzera Italiana, AGI-10 was the first European AGI conference and continued the mission of the first two AGI conferences held in the USA: gathering an international group of leading academic and industry researchers involved in serious scientific and engineering work aimed directly toward the goal of creating AI systems with general intelligence at the human level and ultimately beyond.

Report on the Sixth Conference on Artificial General Intelligence

This report summarizes the major events during the conference, as well as the main topics addressed. Motivated by the original idea of artificial intelligence in the 1950s and 1960s, there has been a revival of research in general intelligence during the last years. The annual AGI conference series, which is the major event in this area, has been held in cooperation with AAAI since 2008. The sixth conference on AGI was held at Peking University, Beijing, from July 31 to August 3, 2013. AGI-13 was collocated with the International Joint Conference on Artificial Intelligence (IJCAI 2013), the major international AI conference.

About Frederique Mittelstaedt Founder Automorph, pioneer of Artificial General Intelligence Joining Asia Tech Podcast AI today is Frederique Mittelstaedt, the founder of Automorph - a platform that aims to bring the problem solving skills of Artificial General Intelligence to the wider public. Well, this could be the future of any app development or SaaS startup. Fred has already pioneered his own AGI programming language along with well thought out ideas about what constitutes intelligence as well as what makes many of those "fuzzy" skills that we love about being human (like creativity, art and music) something that we could ultimately teach machines.