Myelodysplastic syndrome (MDS) is a disease of the stem cells in the bone marrow, which disturbs the maturing and differentiation of blood cells. Annually, some 200 Finns are diagnosed with MDS, which can develop into acute leukemia. Globally, the incidence of MDS is 4 cases per 100,000 person years. To diagnose MDS, a bone marrow sample is needed to also investigate genetic changes in bone marrow cells. The syndrome is classified into groups to determine the nature of the disorder in more detail.

Small-molecule screens aimed at identifying therapeutic candidates traditionally search for molecules that affect one to several outputs at most, limiting discovery of true disease-modifying drugs. Researchers developed a machine-learning approach to identify small molecules that broadly correct gene networks dysregulated in a human induced pluripotent stem cell disease model of a common form of heart disease involving the aortic valve. Gene network correction by the most efficacious therapeutic candidate generalized to primary aortic valve cells derived from more than 20 patients with sporadic aortic valve disease and prevented aortic valve disease in vivo in a mouse model. In high-throughput sequencing data, performance comparisons between computational tools are essential for making informed decisions at each step of a project. Simulations are a critical part of method comparisons, but for standard Illumina sequencing of genomic DNA, they are often oversimplified, which leads to optimistic results for most tools.

IMAGE: AISACS received a total of five inputs and churned out dosage direction probabilities for erythropoiesis-stimulating agents and iron supplements. It was noted that AISACS sometimes produces "clinically appropriate " directions that... view more Anemia, a condition characterized by the lack of healthy red blood cells in the body, is common in patients with chronic kidney disease who need to undergo routine hemodialysis (a process that helps to "clean" the blood when the kidneys don't function well). Thus, red blood cell-stimulating agents (called "erythropoiesis-stimulating agents" or ESAs) and iron supplements (ISs) are administered as part of this process. But, complications can arise if the patients have an altered iron metabolism or poor response to medications. Moreover, the medications tend to be expensive and impose a heavy financial burden on public health.

New technologies in healthcare are being implemented at an increasingly rapid pace, creating game changers in the way medical personnel approach, diagnose and treat life threatening emergencies. As a current example, a recent partnership between MedyMatch Technology and Samsung Neurologica could lead to invaluable information gained and time saved in the processes of providing aid to stroke victims. By doing so, EMTs and paramedics will be able to assess stroke victims faster in their pre-hospital environments. Ambulance-based mobile stroke units that are already equipped with Samsung Nuerologica's CereTom computed tomography scanner will receive integration with the artificial intelligence technology. This will enable first responders to more easily use CT scans to determine with more accuracy whether the patient is suffering from a blood clot or a brain hemorrhage.

AI algorithms can assess the pain that someone with sickle cell disease is experiencing by using just their vital signs. Doing so could ensure people receive the most suitable pain management therapy for their condition. "There's always a trade-off between giving people sufficient medicine to reduce the pain and giving people too much medication so that they have bad side effects or a higher risk of addiction," says Daniel Abrams at Northwestern University in Illinois. But since pain is subjective, it is difficult to measure in a standardised way. Abrams and his colleagues set out to determine whether physiological data that is already routinely taken – including body temperature, heart rate and blood pressure – could be used to devise a system that assesses pain levels in a more objective manner.

Neuroscience: Artificial 'brain in a dish' is created that matures 'just like a human brain'

A'brain in a dish' grown from stem cells in the lab can develop'just like a human brain' -- and may help shed light on conditions like Alzheimer's and schizophrenia. Researchers from the US conducted extensive genetic analyses of the so-called'organoids' which were allowed to grow in experimental dishes for up to 20 months. They found that the artificial brains appear to grow in phases accordance with an internal clock -- one that matches the development of real infant brains. The findings suggest that organoids are able to develop beyond a'foetal' stage, contrary to what had previously been assumed. Given this, brains organoids might well be able to be matured to such an extent that they can be used by scientists to investigate adult-onset diseases like dementia.

The recent release of large-scale healthcare datasets has greatly propelled the research of data-driven deep learning models for healthcare applications. However, due to the nature of such deep black-boxed models, concerns about interpretability, fairness, and biases in healthcare scenarios where human lives are at stake call for a careful and thorough examinations of both datasets and models. In this work, we focus on MIMIC-IV (Medical Information Mart for Intensive Care, version IV), the largest publicly available healthcare dataset, and conduct comprehensive analyses of dataset representation bias as well as interpretability and prediction fairness of deep learning models for in-hospital mortality prediction. In terms of interpretabilty, we observe that (1) the best performing interpretability method successfully identifies critical features for mortality prediction on various prediction models; (2) demographic features are important for prediction. In terms of fairness, we observe that (1) there exists disparate treatment in prescribing mechanical ventilation among patient groups across ethnicity, gender and age; (2) all of the studied mortality predictors are generally fair while the IMV-LSTM (Interpretable Multi-Variable Long Short-Term Memory) model provides the most accurate and unbiased predictions across all protected groups. We further draw concrete connections between interpretability methods and fairness metrics by showing how feature importance from interpretability methods can be beneficial in quantifying potential disparities in mortality predictors. 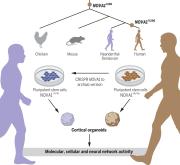 The genomes of Neanderthals and modern humans are overall very similar. To understand the impact of genetic variants that are specific to modern humans, Trujillo et al. performed a genome-wide analysis to identify 61 coding variants in protein-coding genes. Identifying the gene encoding the RNA-binding protein NOVA1 as a top candidate for functional analyses, they introduced the archaic gene variant into human pluripotent stem cells and generated brain organoids. These organoids showed alterations in gene expression and splicing as well as morphology and synaptogenesis, suggesting that this method could be used to explore other genetic changes that underlie the phenotypic traits separating our species from extinct relatives. Science , this issue p. [eaax2537][1] ### INTRODUCTION Current views of human evolution, as supported by the fossil record, indicate that many hominin lineage branches arose, but only one survived to the present. Neanderthals and Denisovans, two of these extinct lineages, are our closest evolutionary relatives and therefore provide the most subtle genetic and phenotypic contrast to our species. Comparison of Neanderthal, Denisovan, and extant human genomes has shown that many humans today carry genes introduced through past admixture events and has allowed enumeration of human-specific genetic differences that may have been important for recent human evolution. Neuro-oncological ventral antigen 1 ( NOVA1 ) includes one of the few protein-coding differences between modern human and archaic hominin genomes that could affect human neurodevelopment. ### RATIONALE NOVA1 regulates alternative splicing in the developing nervous system and is a master regulator of splicing genes responsible for synapse formation. Altered NOVA1 splicing activity in humans is associated with neurological disorders, underscoring the role of NOVA1 in neural function. Using CRISPR-Cas9 genome-editing technology in human induced pluripotent stem cells (iPSCs), we replaced the modern human allele of the NOVA1 gene with the ancestral allele found in Neanderthals and Denisovans, which contains a single-nucleotide substitution at position 200 that causes an isoleucine-to-valine change. To investigate the functional importance of this amino acid change in humans, we followed iPSC neural development through functional cortical organoids. ### RESULTS The reintroduction of the archaic version of NOVA1 into a human genetic background causes changes in alternative splicing in genes involved in neurodevelopment, proliferation, and synaptic connectivity. These changes co-occur with differences in organoid morphology and neural network function, suggesting a functional role for the derived human-specific substitution in NOVA1 . Furthermore, cortical organoids carrying the archaic NOVA1 displayed distinct excitatory synaptic changes, which may have led to the observed alterations in neural network development. Collectively, our data suggest that expression of the archaic NOVA1 leads to modified synaptic protein interactions, affects glutamatergic signaling, underlies differences in neuronal connectivity, and promotes higher heterogeneity of neurons regarding their electrophysiological profiles. ### CONCLUSION A subset of genetic changes may underly the phenotypic traits that separate our species from these extinct relatives. We developed a platform to test the impact of human-specific genetic variants by reintroducing the archaic form found in Neanderthals and Denisovans and measuring its effects during neurodevelopment using human brain organoids. Our results suggest that the human-specific substitution in NOVA1 , which became fixed in modern humans after divergence from Neanderthals, may have had functional consequences for our species’ evolution. ![Figure][2] NOVA1 archaic variant in cortical organoids affects cellular, molecular, and neural network activity profiles. During human evolution, modern humans acquired a specific nucleotide substitution in the RNA binding domain of NOVA1 . Using genome editing technology, the archaic version of NOVA1 was introduced in human iPSCs and differentiated into cortical organoids. The changes could be observed in different levels, from altered proliferation, different gene expression, and splicing profiles to modified glutamatergic synapsis and neuronal network connectivity. NOVA1 I200, NOVA1 gene containing isoleucine archaic variant. NOVA1 V200, NOVA1 gene containing valine human variant; NOVA1Ar/Ar, human cell line with homozygous reintroduction of the NOVA1 archaic variant; NOVA1Hu/Hu, human cell line with NOVA1 human variant. Figure created with BioRender.com. The evolutionarily conserved splicing regulator neuro-oncological ventral antigen 1 ( NOVA1 ) plays a key role in neural development and function. NOVA1 also includes a protein-coding difference between the modern human genome and Neanderthal and Denisovan genomes. To investigate the functional importance of an amino acid change in humans, we reintroduced the archaic allele into human induced pluripotent cells using genome editing and then followed their neural development through cortical organoids. This modification promoted slower development and higher surface complexity in cortical organoids with the archaic version of NOVA1 . Moreover, levels of synaptic markers and synaptic protein coassociations correlated with altered electrophysiological properties in organoids expressing the archaic variant. Our results suggest that the human-specific substitution in NOVA1 , which is exclusive to modern humans since divergence from Neanderthals, may have had functional consequences for our species’ evolution. [1]: /lookup/doi/10.1126/science.aax2537 [2]: pending:yes