The state of autonomous vehicle safety standard regulation in the US today is between two presidential administrations, with the Trump Administration-era regulations issued Jan. 14 likely to be soon superseded by policies of the Biden Administration. The Trump Administration rules would allow self-driving vehicle manufacturers to skip certain federal crash safety requirements in vehicles not designed to carry people, marking the first major update to federal safety standards to accommodate innovations of driverless technology, according to an account in The Detroit News.This would apply for example to the delivery vehicle from startup Nuro, which has no driver or passengers. The National Highway Traffic Safety Administration estimated the rule would save automakers and consumers $5.8 billion in 2050. "With more than 90% of serious crashes caused by driver error, it's vital that we remove unnecessary barriers to technology that could help save lives," stated then NHTSA Deputy Administrator James Owens. On Jan. 25, Steve Cliff, deputy executive officer of the California Air Resources Board, was named deputy administrator of the NHTSA. Ariel Wolf, counsel to the Self-Driving Coalition, said of the Jan. 14 announcement that the NHTSA rule was a "highly significant" development in safety rules for self-driving vehicles.

Toyota has launched Advanced Drive, a new driver assistance technology, with the latest Toyota Mirai and Lexus LS vehicles. Advanced Drive is capable of Level 2 autonomy and can free the driver from operating the accelerator, brakes and even the steering wheel -- under certain traffic conditions and with the driver's supervision, that is. It was designed for highway driving only, and like other available assistance technologies today, it doesn't have full self-driving capabilities yet. Advanced Drive uses data from the vehicle's telescopic camera and LiDAR, as well as information from high-precision maps to detect other vehicles in the same lane. So long as a driver sets the destination in the navigation system, the technology will be able to assess situations and make decisions when it comes to changing lanes, maintaining distance from other vehicles, navigating lane splits and overtaking other vehicles. 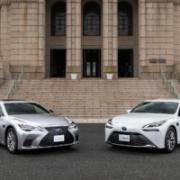 Toyota Motor Corp. announced Thursday its launch of new models for its luxury sedan Lexus LS and hydrogen-powered Mirai equipped with assistant technologies that allow drivers to take their hands off the steering wheel in designated lanes. The new LS went on sale Thursday at a price starting from ¥16.32 million ($148,800). The Mirai will be sold from Monday, priced from ¥8.45 million, the company said. The autonomous driving technology equipped with the new models is a level-2 assistant system that could help with driving on an expressway or other motor-vehicle-only roadway. The technology can help with keeping the vehicle in its lane, maintaining the distance from other cars and navigating a lane splitting.

Researchers from the Queensland University of Technology (QUT) have touted the use of artificial intelligence to determine the feasibility of autonomous cars on Australian roads. The QUT Centre for Robotics has conducted research projects into mapping for autonomous cars using AI. The centre's acting director Professor Michael Milford said map updating is a major challenge for autonomous vehicle adoption. Milford said given mapping isn't a globally mature field, there are opportunities for Australia to catch up quickly. "Current out-of-the-box European mapping solutions don't recognise unique Australian signs or infrastructure and require customisation," he said.

Machine learning is a branch of artificial intelligence (AI) focused on building applications that learn from data and improve their accuracy over time without being programmed to do so. In data science, an algorithm is a sequence of statistical processing steps. In machine learning, algorithms are'trained' to find patterns and features in massive amounts of data in order to make decisions and predictions based on new data. The better the algorithm, the more accurate the decisions and predictions will become as it processes more data. Machine learning has led to some amazing results, like being able to analyze medical images and predict diseases on-par with human experts.

Measuring the effects of Shared and Electric Autonomous Vehicles (SAEV) on urban mobility.

Autonomous driving, connectivity, car sharing, electric vehicles, and the rise of renewable energy will all have powerful mutually reinforcing effects. For example, the introduction of self-driving cars in the 2020s will increase the use of EVs in high-use services such as ride-hailing because lower operating costs will offset the higher initial costs of these vehicles. The movement of people and goods is central to our society and economic activities. According to a BNEF-McKinsey & Company study, the change in how people move around cities will put the automotive and energy industries, as well as governments, under pressure. Light-duty vehicle fuel consumption could drop by up to 75% in some cities by 2030, prompting governments to look for new ways to recoup lost fuel taxes.

Waymo is a self-driving car company, but they don't particularly like using that terminology. Instead they prefer fully autonomous as a more accurate way to describe driverless or autonomous driving technology. What consumers may not fully understand is the difference between self-driving and fully autonomous. A self-driving car is a type of vehicle that can provide some level of automation like ADAS (Advanced Driver Assistance System) or automatic cruise control. It still requires driver attention for proper operation or it can lead to accidents.

A team of researchers in Germany have come up with a safety system that could warn drivers of autonomous cars that they will have to take control up to seven seconds in advance. A team of researchers at the Technical University of Munich (TUM) has developed a new early warning system for autonomous vehicles that uses artificial intelligence to learn from thousands of real traffic situations. The study of the system was carried out in cooperation with the BMW Group. Researchers behind the study claim that if used in today's self-driving vehicles, it could offer seven seconds advanced warning against potentially critical situations that the cars cannot handle alone – with over 85 per cent accuracy. To make self-driving cars safe in the future, development efforts often rely on sophisticated models aimed at giving cars the ability to analyse the behaviour of other traffic.

Apple chief executive Tim Cook has addressed rumours that his company is building a car in a new interview. While he declined to confirm any real details of what Apple is planning to release – if anything – he did give an indication of what the company might look to do if it does release a car, as rumoured. He noted that "an autonomous car is a robot" and that Apple looks to integrate hardware and software in all of its products. But the company "investigate so many things internally", many of which never actually "see the light of day", he told Kara Swisher in an interview for her New York Times podcast, Sway. In the same intervew, Mr Cook also discussed his commitment to free speech, his hope that controversial social media app Parler could return to the App Store, and Apple's ongoing fight with competitors including Facebook.

How do we build trustworthy AI-based Systems? – An interview with KIT Professor Ali Sunyaev – KIT Link

Which economic sectors are likely to benefit the most from the introduction of AI-based Systems, and how is their introduction going to affect us? The introduction of AI-based systems will for sure have effects on virtually any economic sector – in some cases the effects will be tremendous. In fact, AI-based systems are already transforming several industries today, as we speak. Look at the automotive industry and the on-going shift to semi- or even fully autonomous cars. Some colleagues at KIT are doing genuinely groundbreaking research in this area.