After the Perseverance rover spent its first three months on Mars getting its bearings and serving as an observation post for the successful Ingenuity helicopter flights, NASA announced the robot has started its primary mission: seeking out past evidence of microbial life -- should any have ever existed. "The time has come: I'm switching from on-scene photographer to science investigator," NASA's Perseverance rover Twitter account posted this week. "Did this ancient lakebed ever have life? The tools I brought will help begin the hunt. The "hunt" largely means scouring the geological and chemical make-up of rocks in the Jezero Crater, a place NASA believes was "once flooded with water and was home to an ancient river delta." Primitive life could have potentially dwelled in these wet soils, like it does on Earth. The time has come: I'm switching from on-scene photographer to science investigator. Did this ancient lakebed ever have life? The tools I brought will help begin the hunt. Sitting atop the car-sized Perseverance rover (like a crow's nest on a ship) is the SuperCam, which fires a powerful laser to identify the composition of rocks, and, ultimately, the most interesting places to go. From distances of over 20 feet away, a laser strike concentrates the power of one million light bulbs onto rocks and soil, producing flickers of light. These flickers are excited atoms, and the SuperCam analyzes this light to glean if a rocky target might have preserved past signs of Martian life -- like certain organic materials microbes may have once munched on. If NASA engineers spot a place of interest, they can instruct the rover to then rumble over and closely investigate. A device aptly named SHERLOC (short for Scanning Habitable Environments with Raman & Luminescence for Organics & Chemicals) is mounted on the rover's arm. It employs cameras, a laser, and other instruments to closely scour rocks and the ground for minerals, organic molecules, and potential biosignatures (something that indicates evidence of life). "SHERLOC has a magnifying glass just like the fictional detective to see fine detail," writes NASA. Testing out my tools as I move into more science. Used my robotic arm to get right up close to this rock after zapping it with my laser. At times, an instrument on the rover's arm will even grind down rock surfaces to better glean what's inside, and allow SHERLOC a closer look. The real mission has begun, led by the rover's instruments. "What insights they turn up will help scientists create a timeline of when an ancient lake formed there, when it dried, and when sediment began piling up in the delta that formed in the crater long ago," NASA wrote. Understanding this timeline should help date rock samples – to be collected later in the mission – that might preserve a record of ancient microbes."

NASA's OSIRIS-REx mission will leave asteroid Bennu today and begin its 1.4 billion mile, two year long journey back to the Earth, the space agency confirmed. OSIRIS-REx (the Origins, Spectral Interpretation, Resource Identification, Security, Regolith Explorer) was the first NASA mission to visit a near-Earth asteroid, survey the surface, and collect a sample to deliver to Earth. The spaceship was sent to study Bennu, an asteroid around the size of the Empire State Building and 200 million miles away, between the orbit of Earth and Mars. OSIRIS-REx gathered 2.1 ounces (60 grams) of rock and dust during its land and grab mission to the surface of the giant space rock, filling its storage compartment. It will begin its long journey home at 21:00 BST (16:00 EDT), with a live broadcast from NASA sharing the moment it fires its thrusters to push away from Bennu's orbit. If all goes to plan, OSIRIS-REx will orbit the sun twice, travelling 1.4 billion miles as it lines up with Earth, returning its samples in Utah on September 24, 2023.

NASA's Perseverance Mars rover has achieved yet another first after capturing the sounds of another spacecraft hovering on the red planet. Using the microphone on its rock-zapping SuperCam instrument, the six-wheeled robot listened to the sounds of the Ingenuity helicopter on April 30 and recorded the whirring of its fast-spinning rotors. This marked the first time a spacecraft has recorded audio of another probe on a world beyond Earth. This was the chopper's fourth flight since Perseverance and Ingenuity landed together on Feb. 18 on the floor of Mars' Jezero Crater, NASA said in a statement. A video recently released by NASA combined the footage from Perseverance's Mastcam-Z imager of the solar-powered helicopter with the recorded audio, allowing scientists to know how the robot is performing just by tuning in to the sound it makes.

Work as a data scientist follows a cycle: log in, clean data, define features, test and build a model, and make sure the model is running smoothly. Sounds straightforward enough, except not all parts of the cycle are created equal: data preparation takes 80% of any given data scientist's time. No matter what project you're working on, most days you're cleaning data and converting raw data into features that machine learning models can understand. The monotonous hole of data prep blends hours together and makes each day of work feel identical to the one before it. Why can't you do this tedious process more effectively?

Jose Hernandez joins'Fox News Live' to discuss NASA's historic feat and Blue Origin's latest successful launch, return. NASA's Mars Ingenuity helicopter took off on its fifth test flight Friday, but it won't be returning to the Perseverance rover this time. The helicopter took flight around 3:30 p.m. ET from Wright Brothers Field, where it has performed its previous test flights, with the plan this time to head south 423 feet and land in a new area for the first time. Data from the light will transmit back to NASA's Jet Propulsion Laboratory around 7:30 p.m. on Friday. NASA's Ingenuity Mars Helicopter can be seen hovering over Jezero Crater.

The Morning After: NASA makes more flight plans for the Mars copter

While there are many free-to-play titles these days, it seems like most high-profile games don't give players a way to try them out without paying the full price up front. That's not the case for Resident Evil Village, although an odd time-locked system has made it frustrating for fans to dive into the game before it's released next week. The good news is that Capcom has relaxed its policy a bit. The final demo will unlock tonight on PlayStation, Xbox, Steam and Stadia, and players can get a 60 minute taste of the game -- complete with towering vampire ladies -- at any point over the next eight days. On Friday, NASA announced it plans to transition the rotorcraft to an operational role once it completes its remaining test flights.

NASA's Ingenuity helicopter has made its fourth and furthest flight

NASA's Perseverance rover captured this image of the Ingenuity helicopter during its fourth flight The Ingenuity helicopter has flown on Mars once again. During its fourth flight on 30 April, the drone flew further and faster than ever before – and it is far from finished, as NASA also announced a month-long extension to its mission. Ingenuity achieved all of the main goals of its mission in its first three flights, so the aim of the fourth flight was to push beyond that slightly. The fourth flight lasted nearly two minutes, during which the helicopter flew 266 metres and reached a top speed of 13 kilometres per hour. The mission was planned to include only five flights before the Perseverance rover drove away and began its own primary missions of searching for signs of ancient life and collecting samples to be returned to Earth.

NASA's 'mole' tried to dig into Mars. It didn't go as planned. 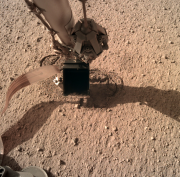 From the robots that fail miserably at their jobs to the robots dealing with our literal crap, Mashable's Crappy Robots dives into the complex world of automation -- for better or worse or much, much worse. After its first attempt to penetrate the rust-colored Martian surface in 2019, NASA's "mole" sent a signal back to Earth. It was not good news. The mole is part of the Heat Flow and Physical Properties Package (HP³) on NASA's InSight lander, which touched down on Mars in 2018. Built by the German Aerospace Center, the mole works by hammering itself into the ground.

Jose Hernandez joins'Fox News Live' to discuss NASA's historic feat and Blue Origin's latest successful launch, return. NASA's helicopter on Mars, the four-pound "Ingenuity," failed to get off the ground for its fourth flight Thursday, but NASA said it is safe and will try again Friday. Previous test flights for the helicopter went well, with Ingenuity rising up 16 feet in the air during the third flight last Sunday then flashing downrange about 50 yards at a speed of 6.6 feet per second. The second test flight on April 22 and the first flight on April 19 also went as planned. The cause of Thursday's hiccup was a "watchdog" timer issue that prevented Ingenuity from transitioning to "flight mode."

Artificial intelligence is learning how to dodge space junk in orbit

An AI-driven space debris-dodging system could soon replace expert teams dealing with growing numbers of orbital collision threats in the increasingly cluttered near-Earth environment. Every two weeks, spacecraft controllers at the European Space Operations Centre (ESOC) in Darmstadt, Germany, have to conduct avoidance manoeuvres with one of their 20 low Earth orbit satellites, Holger Krag, the Head of Space Safety at the European Space Agency (ESA) said in a news conference organized by ESA during the 8th European Space Debris Conference held virtually from Darmstadt Germany, April 20 to 23. There are at least five times as many close encounters that the agency's teams monitor and carefully evaluate, each requesting a multi-disciplinary team to be on call 24/7 for several days. "Every collision avoidance manoeuvre is a nuisance," Krag said. "Not only because of fuel consumption but also because of the preparation that goes into it. We have to book ground-station passes, which costs money, sometimes we even have to switch off the acquisition of scientific data. We have to have an expert team available round the clock."