How to utilize Machine Learning for IoT Analysis

Machine Learning and the Internet of Things (IoT) have been the buzzwords for the decade. These technologies find application in almost all industries, from enabling artificially intelligent powered digital assistants to the supply chain's automation. They have revolutionized not only how we interact on social media but also how we pay the bills. Here is how to use Machine Learning for IoT Analysis. Taking a glance at the Google tendencies analysis below, one can be sure that these technologies offer a profitable career, so many people are interested in learning about these.

Artificial Intelligence has mastered a wide spectrum of abilities by now. AI is everywhere around us today in form of face recognition, voice assistance, maps, predictions, etc. However, there was one realm where AI lacked the right skills till recently. Now it's getting better at it and the practical uses are numerous. The reasons for the failures were many.

Data Scientists Will be Extinct in upcoming years

Reinforcement learning is a type of dynamic programming that focuses on results operating a process of compensation and retribution. It understands by combining with its ecosystem. They find compensation for going on properly and discipline for operating incorrectly. The operator determines without interference from a mortal by expanding its profit and decreasing its discipline. A neural network is a type of machine learning which creates itself after the human brain, setting up an artificial neural network that via a method provides the computer to understand by integrating different circumstances.

The AI-Powered Micro-Business with Ash Fontana

Artificial Intelligence is already part of our lives in the tools and services we use every day. As AI development accelerates, how can authors and small businesses use it as leverage to expand income and opportunities? Ash Fontana gives some ideas in this interview on The AI-First Company.

Spot can carry loads weighing up to 14 kg on its back. It stands up when it falls and works in temperatures between -20 and 45 degrees Celsius. It has a range of 90 minutes and a maximum speed of 4.8 km/h. The robot can move according to the instructions given to it, avoid obstacles and maintain its balance in extreme circumstances. It is also water resistant, making it a fairly versatile work tool. 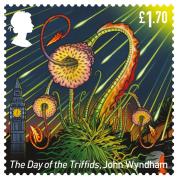 In fact, I can't remember the last time I used one (sorry, Mum). But the latest batch from the Royal Mail has me wanting to send letters to every corner of the universe. The British postal service has released a wondrous new collection of artworks that will be featured on its tiny postage stamps, celebrating six classic science fiction novels by British writers. Set to mark the 75th anniversary of HG Wells' death and the 70th anniversary of John Wyndham's classic novel The Day of the Triffids being published, the collection features illustrations for Frankenstein by Mary Shelley, The Time Machine by HG Wells, Brave New World by Aldous Huxley, Childhood's End by Arthur C Clarke, Shikasta by Doris Lessing, and of course, The Day of the Triffids. The artists behind the works are Sabina Šinko, Francisco Rodríguez, Thomas Danthony, Mick Brownfield, Matt Murphy, and Sarah Jones.

In dense and dynamic scenarios, planning a safe and comfortable trajectory is full of challenges when traffic participants are driving at high speed. The classic graph search and sampling methods first perform path planning and then configure the corresponding speed, which lacks a strategy to deal with the high-speed obstacles. Decoupling optimization methods perform motion planning in the S-L and S-T domains respectively. These methods require a large free configuration space to plan the lane change trajectory. In dense dynamic scenes, it is easy to cause the failure of trajectory planning and be cut in by others, causing slow driving speed and bring safety hazards. We analyze the collision relationship in the spatio-temporal domain, and propose an instantaneous analysis model which only analyzes the collision relationship at the same time. In the model, the collision-free constraints in 3D spatio-temporal domain is projected to the 2D space domain to remove redundant constraints and reduce computational complexity. Experimental results show that our method can plan a safe and comfortable lane-changing trajectory in dense dynamic scenarios. At the same time, it improves traffic efficiency and increases ride comfort.

Having surpassed peak marketing hype, Internet of Things (IoT) technologies are now an established building block, both in the business environment and in industrial applications. An illustration of technology maturity is how combinations with other technologies enable new operational solutions. Gone are the days of deploying exploratory pilots. Now, product managers focus less on connectivity and more on packaging connectivity, data management, and security for operational use. This involves integrating cloud infrastructure services, AI and ML analytics, and visualization dashboards to design end-to-end IoT systems with operational users in mind.

Now you can read an overall summary of the job role and your existing Resume! Did you miss anything about the job role that is being highlighted in summary? Small nuanced details can help you sell yourself. Does your summarized document make sense and bring out your essential qualities? Perhaps a concise summary alone is not sufficient. Next, let us measure how similar your Resume is to a job specification. Figure 2 provides the code. Broadly we make a list of our text objects then create an instance of the sklearn CountVectorizer() class.