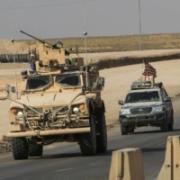 Washington – A senior al-Qaida leader was killed in a U.S. drone strike in Syria, the Pentagon said Friday. The strike comes two days after a base in southern Syria, used by the U.S.-led coalition fighting the Islamic State group, was assaulted. "A U.S. airstrike today in northwest Syria killed senior al-Qaida leader Abdul Hamid al-Matar," said Central Command spokesman Maj. There were no known casualties from the strike, he said, adding it was conducted using an MQ-9 aircraft. "The removal of this al-Qaida senior leader will disrupt the terrorist organization's ability to further plot and carry out global attacks," he said.

In this tutorial, you'll learn everything you need to know to get up and running with NumPy, Python's de facto standard for multidimensional data arrays. NumPy is the foundation for most data science in Python, so if you're interested in that field, then this is a great place to start.

The lead scientist at Qatar Computing Research Institute or QCRI and also the author of the paper, Amin Sadeghi, says that the deep learning model can generalize from one city to another by adding multiple clues from unrelated data sources. With the help of AI, he says that the deep learning model can identify and predict the crash maps in uncharted territories. This dataset has included 7,500 kilometers from Los Angeles, Chicago, New York City, and Boston. When considered among the four cities Los Angeles was identified as the highest crash density after which follows New York City, Chicago, and Boston.

How to draw ROC curve for a multi-class dataset ?

Say I have a multi-class dataset and would like to draw its associated ROC curve for one of its classes (e.g. SkLearn has a handy implementation that calculates the tpr and fpr and another function that generates the auc for you. You can just apply this to your data by treating each class on its own (all other data being negative) by looping through each class. The code below was inspired by the scikit-learn page on this topic itself. For this exercise, I will generate some synthetic sample data and for predictions as well I will create a vector from random uniform distribution.

Imagine a situation: you are the scientist who wants to create a robot using unsupervised learning. At first, you want him to be smart, so you spend two weeks putting in all the data. Then, you ask him to write articles about global warming in physical copy. It understands everything now so what it needs to do is to write and write and write. You keep it working and go to eat your dinner.

AI isn't just about disruption. Integration is essential, too

Sponsored We're used to talking about the disruption AI will inevitably cause. But that disruption is predicated on AI moving into production, and that requires integration into the broader corporate infrastructure. This is the point at which CPUs and GPUs matter less than traditional data protocols and principles that will allow your AI operations to fully exploit the potential of your broader infrastructure – while avoiding the pitfalls posed by some elements of legacy storage technology. This might seem like a tall order, but you can get a grip on what it means by joining this upcoming webcast, It's Time to Bring AI into the Broader Infrastructure Fold, on November 3 at 10am PDT (1pm EDT, 5pm GMT.) The Next Platform's co-editor Nicole Hemsoth will be joined by VAST Data's Jeff Denworth, and Nvidia's Tony Paikeday to discuss how to do all this not just in theory, but in practice.

There are a lots of Deep Learning Algorithms that are used, but what are some of the best? I have already discussed the most basic of Neural Networks or the Perceptron here. If you want to know how a neural network would function in its barest form, please check that out. Deep learning algorithms use ANNs (short for Artificial Neural Networks) to duplicate the functioning of our brain. Not trying to be philosophical or historical, but our brain is the most complicated piece of machinery we know.

How AI is reinventing what computers are

Every year, right on cue, Apple, Samsung, Google, and others drop their latest releases. These fixtures in the consumer tech calendar no longer inspire the surprise and wonder of those heady early days. Google's latest offering, the Pixel 6, is the first phone to have a separate chip dedicated to AI that sits alongside its standard processor. And the chip that runs the iPhone has for the last couple of years contained what Apple calls a "neural engine," also dedicated to AI. Both chips are better suited to the types of computations involved in training and running machine-learning models on our devices, such as the AI that powers your camera.

The US military has killed senior al Qaeda leader Abdul Hamid al-Matar in a drone strike in Syria, a US Central Command spokesman said. "The removal of this al Qaeda senior leader will disrupt the terrorist organisation's ability to further plot and carry out global attacks threatening US citizens, our partners, and innocent civilians," US Army Major John Rigsbee said in a written statement late on Friday. The strike comes two days after a US outpost in southern Syria was attacked. Rigsbee did not say if the US drone strike was carried out in retaliation of the attack.