How to Bust Your Spotify Feedback Loop and Find New Music

If you're listening to music right now, chances are you didn't choose what to put on--you outsourced it to an algorithm. Such is the popularity of recommendation systems that we've come to rely on them to serve us what we want without us even having to ask, with music streaming services such as Spotify, Pandora, and Deezer all using personalized systems to suggest playlists or tracks tailored to the user. This story originally appeared on WIRED UK. Generally, these systems are very good. The problem, for some, is that they're perhaps really too good.

In this episode, Abate follows up with Benjamin Pietro Filardo, founder of Pliant Energy Systems and NACROM, the North American Consortium for Responsible Ocean Mining. Pietro discusses the current proposed solutions for deep sea mining which are environmentally destructive, and he offers an alternative solution using swarm robots which could mine the depths of the ocean while creating minimal disturbance to this mysterious habitat. Benjamin "Pietro" Filardo After several years in the architectural profession, Pietro founded Pliant Energy Systems to explore renewable energy concepts he first pondered while earning his first degree in marine biology and oceanography. With funding from four federal agencies he has broadened the application of these concepts into marine propulsion and a highly novel robotics platform.

Still talking to Cortana? Microsoft gives you more control over how your voice recordings are used

Users of Microsoft's voice-enabled services such as Cortana will now be able to decide whether or not the audio recordings of their interactions can be used by the company to improve its speech recognition algorithms. By default, customers' voice clips will not be contributed for review, said Microsoft in a new blog post; instead, users will be required to actively opt in to allow the company to store and access their audio recordings. Customers who have chosen to remain opted out will still be able to use all of Microsoft's voice-enabled products and services, confirmed the company. Their audio recordings won't be stored, but Microsoft will still have access to some information associated with voice activity, such as the transcriptions automatically generated during user interactions with speech recognition AI. If and once they have opted in, however, users' voice data might be listened to by Microsoft employees and contractors as part of a process to refine the AI systems used to power speech recognition technology.

As politicians play whack-a-mole with COVID-19 infection rates and try to balance the economic damage caused by lockdowns, stay-at-home orders have also impacted those out there in the dating scene. No longer able to meet up for a drink, a coffee, or now even a walk in the park, organizing an encounter with anyone other than your household or support bubble is banned and can result in a fine in the United Kingdom -- and this includes both dates and overnight stays. Therefore, the only feasible option available is online connections, by way of social networks or dating apps. Dating is hard enough at the best of times but sexual desire doesn't disappear just because you are cooped up at home. Realizing this, a number of healthcare organizations worldwide have urged us not to contribute to the spread of COVID-19 by meeting up with others for discreet sex outside of our social bubbles, bringing new meaning to the phrase, "You are your safest sex partner."

This Nintendo player turned 'Mario Kart 8 Deluxe' into a fitness game. Here's how he did it.

The lengthy video breaks down how Choi built his "Labo Fit Adventure Kart Kit." The heart of his creation is TAPBO, a small robotic device he engineered that holds the Joy-Con in place and has motorized arms that press down on two of the controller's buttons for accelerating and slowing down in "Mario Kart 8 Deluxe." To play, you sit on the bike (which he comically calls the Bike-Con and covered in cardboard to resemble Nintendo Labo's line of products), hold the Ring-Con in both hands like a steering wheel, and peddle to move forward.

The Future Of Fraud

There are many amazing practical applications of AI and machine learning here now and on the horizon. But that doesn't mean every use is good or applied with good intent. The fastest growing type of financial crime in the United States is synthetic identity fraud - when a fraudster uses a combination of real and fake information to create an entirely new identity. This progressive uptick in synthetic identity fraud is likely due to multiple factors such as data breaches, dark web data access, and the competitive lending landscape. In Experian's recent Future of Fraud Forecast, they are predicting that these fraudsters will start to use fake faces for biometric verification, which is the first of five new threats they detail for 2021.

A study by Vuno, a Korean artificial intelligence (AI) developer, showed that a deep learning algorithm could predict Alzheimer's disease (AD) within one minute. Jointly with Asan Medical Center, Vuno verified an AI algorithm using MRI scans of 2,727 patients registered at domestic medical institutions. Vuno found that the algorithm predicted AD and mild cognitive impairment (MCI) accurately. Vuno's deep learning-based algorithm used an area under the curve (AUC) to predict dementia. The closer the AUC value is, the higher the algorithm's performance is. 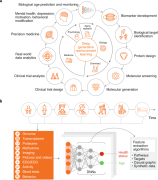 Aging is a universal feature shared by all living beings. While the rate of aging may vary among individuals and species, the time elapsed since birth is a strong predictor of health status and mortality. Targeting aging may extend the average life expectancy more substantially than prevention or treatment of individual diseases1. However, within the established drug discovery and development framework, pharmaceutical companies are still searching for compounds and interventions for the treatment of individual chronic diseases such as cancer and cardiovascular or pulmonary diseases. Current biomedical research aims to identify the underlying mechanisms and molecular targets specific to a disease in order to modify the disease, treat its symptoms or cure it.

I've read the book Life 3.0 by physicist & AI philosopher Max Tegmark, where he sets out a series of possible scenarios and outcomes for humankind sharing the planet with artificial intelligence. Tegmark immediately shoots down any notion that we are likely to be victims of a robot-powered genocide, and claims the idea we would programme or allow a machine to have the potential to hate humans is preposterous - fuelled by Hollywood's obsession with the apocalypse. Actually, we have the power, now, to ensure that if AIs goals are properly aligned with ours from the start, so that it wants what we want, then there can never be a'falling out' between species. In other words, if AI does pose a threat - and in some of his scenarios it does - it will not come from The Matrix's marauding AIs, enslaving humanity and claiming, like Agent Smith, 'Human beings are a disease. You are a plague and we are the cure'.