Reimagining the Delivery of Health Care to Create Resiliency

For guidance on how healthcare organizations can leverage connected health technologies to support care anywhere initiatives and create a better experience for healthcare providers and patients, join us for the webinar, Driving Patient-Centric Care: Innovating Drug Development and Care Delivery with Connected Health Technologies, live on July 20 at 11 am EDT. COVID-19 showed how resourceful healthcare and life science organizations could be in the midst of a global pandemic. As the science of how the coronavirus worked and how to contain it evolved, those on the front line had to respond quickly to make course corrections. In many ways, they were fixing the plane while flying it. This was no small feat with so many lives on the line including patients, direct care health providers, first responders, and staff.

I just want to preface by saying that this article serves as more of a reflection of what I did to get to where I am today. I'm not suggesting that you will achieve the same thing by following the same steps, but I figured that this might provide you with a unique perspective that you might not have thought about before. With that said, let's dive into it! Many people today tend to look towards high-risk, high-reward investments like Bitcoin in an attempt to "get rich quick," but as Warren Buffett said, the best investment you can make is in yourself. This is especially true for those who don't have money to invest but want to better their finances.

When it comes to online learning, it's important for colleges to have courses that can adapt to our technology-driven world. That's why our mission at Amesite is to improve the way the world learns, catering to different types of learners while also giving them classes that are transferable. Our courses use AI to give students and instructors an exceptional online learning experience. But why should you use Amesite? Amesite's system uses established social media formats to help learners access content in a familiar setting.

Big Tech is fueling an AI "arms race": It could be terrifying -- or just a giant scam

Early in the 2020 presidential campaign, Democratic candidates Pete Buttigieg and Andrew Yang tried to build political momentum around the claim that the United States is losing ground in a new arms race with China -- not over nuclear missiles or conventional arms but artificial intelligence, or AI. Around the same time, former President Trump launched the American AI Initiative, which sought to marshal AI technologies against "adversarial nations for the security of our economy and our nation," as Trump's top technology adviser put it. Buttigieg, Yang and Trump may have agreed about little else, but they appeared to go along with the nonpartisan think tanks and public policy organizations –– many of them funded by weapons contractors –– that have worked to promote the supposedly alarming possibility that China and Russia may be "beating" the U.S. in defense applications for AI. Hawkish or "centrist" research organizations like the Center for New American Security (CNAS), the Brookings Institution and the Heritage Foundation, despite their policy and ideological differences in many areas, have argued that America must ratchet up spending on AI research and development, lest it lose its place as No. 1. Just last week, the National Security Commission on Artificial Intelligence (NSCAI) published a sweeping 756-page report, culminating two years of work following the 2019 National Defense Authorization Act, asking Congress to authorize a $40 billion federal investment in AI research and development, which the NSCAI calls "a modest down payment."

Is Artificial Intelligence (AI) prone to threats by which it can be hacked?

The Data Science and AI trends that will characterize the future.

Have you ever hopped upon a roller coaster and regretted it instantly? It opened with the Australian wildfire and the headlining act – the Covid-pandemic has claimed 1.84 million human lives and counting. But 2020 has given technological evolution a strong push and moved it ahead with speed. The year has also reminded us how easy it is to lose track of the critical changes in the world of technology in the midst of a great humanitarian crisis. We have seen every business move online, and every person has had to work from home at some point this year.

Council Post: How Companies Can Keep AI In Their Digital Transformation Plans

David Moise is CEO, and sometimes developer, of Decide Consulting, an executive search and recruiting firm for IT and Software roles. Even as it begins to look more promising that the pandemic will one day be behind us, we continue to move toward digital acceleration. We already knew that the companies that invested more in IT have a competitive edge and the pandemic doubled down on that concept. Across the country the phrase "digital transformation" is being repeated in the C-suite; projects are getting the green light, IT spending is getting priority, companies are hiring and the demand for talent is heating up. Digital transformation at many companies includes topics such as agile, DevOps and cybersecurity, while others are ready for artificial intelligence (AI) and machine learning (ML).

Few emerging technologies today are as exciting as artificial intelligence. We're witnessing its capabilities applied in new ways, from rapidly analyzing enormous amounts of data to boosting efficiencies in hardware and software. C3.ai (NYSE:AI) is one of the only companies in the world that develops artificial intelligence as a stand-alone service -- put simply, AI is the entirety of its business. Investors have shunned the stock this year as larger technology companies begin to work on artificial intelligence projects, sparking fears of mounting competitive threats. But C3.ai continues to grow revenue, narrow its losses, and it added 82% more customers in the fourth quarter of fiscal 2021 (ended April 30, 2021).

The last 15 years have been tough times for many Americans, but there are now encouraging signs of a turnaround. Productivity growth, a key driver for higher living standards, averaged only 1.3% since 2006, less than half the rate of the previous decade. But on June 3, the US Bureau of Labor Statistics reported that US labor productivity increased by 5.4% in the first quarter of 2021. What's better, there's reason to believe that this is not just a blip, but rather a harbinger of better times ahead: a productivity surge that will match or surpass the boom times of the 1990s. Our optimism is grounded in our research which indicates that most OECD countries are just passing the lowest point in a productivity J-curve. Driven by advances in digital technologies, such as artificial intelligence, productivity growth is now headed up. 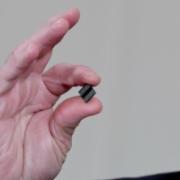 U.S. President Joe Biden's blueprint for the U.S. semiconductor industry marks an ambitious effort to set industrial policy for a critical sector of the economy, but the strategy will need more money and global support to take back chip supremacy and pre-empt a rival effort from China. The White House on Tuesday outlined a sweeping plan to secure the conduits for critical products from medicines to chips, responding in part to the growing economic and political sway of its Asian rival. Semiconductors -- the basic yet incredibly sophisticated components in almost every modern device -- took center stage in a 250-page White House report, which highlighted Beijing's "ultimate goal of cyber sovereignty and establishing first-mover advantage." The U.S. Senate expressed bipartisan support by passing a bill offering $52 billion to bolster domestic chip manufacturing the same day. That's aimed at reassuring industry leaders like Intel Corp., Samsung Electronics Co. and Taiwan Semiconductor Manufacturing Co. as they consider expanding investments in production capacity in the country.