Avoiding Carsickness When the Cars Drive Themselves

The day is approaching when commuters stuck in soul-crushing traffic will be freed from the drudgery of driving. Companies are investing billions to devise sensors and algorithms so motorists can turn our attention to where we like it these days: our phones. But before the great promise of multitasking on the road can be realized, we need to overcome an age-old problem: motion sickness. "The autonomous-vehicle community understands this is a real problem it has to deal with," said Monica Jones, a transportation researcher at the University of Michigan. "That motivates me to be very systematic."

California requires all companies that test self-driving cars on public roads in the state to report miles driven and the number of "disengagements," or times a human driver takes over control. Cruise co-founder and CTO Kyle Vogt believes this reporting method is a poor metric for comparing companies, and is causing companies to test and demo in easier environments in order to reduce reported disengagements. In a post on Medium, Vogt says that at Cruise, disengagements are sometimes used as a courtesy to other drivers, or as a cautious reaction from the driver to a situation that could have been handled by the vehicle. He explains, "Have you ever been in the backseat of a human-driven car and felt the urge to grab the wheel when something crazy happens on the road? Autonomous vehicle (AV) companies need to be extra careful when it comes to safety, as well as the perception of safety. AVs working correctly is not news, but disengagements, running red lights, and crashes are very much news that could affect the perception of AV safety, independent of their actual safety record. This leads to the well-controlled demos that Vogt takes issue with. "Companies carefully curate demo routes, avoid urban areas with cyclists and pedestrians, constrain geofences and pickup/dropoff locations, and limit the kinds of maneuvers the AV will attempt during the ride -- all in order to limit the number of disengagements.

AI in storytelling: Machines as cocreators 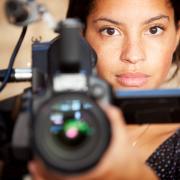 Sunspring debuted at the SCI-FI LONDON film festival in 2016. Set in a dystopian world with mass unemployment, the movie attracted many fans, with one viewer describing it as amusing but strange. But the most notable aspect of the film involves its creation: an artificial-intelligence (AI) bot wrote Sunspring's screenplay. "Maybe machines will replace human storytellers, just like self-driving cars could take over the roads." A closer look at Sunspring might raise some doubts, however.

The Las Vegas self-driving shuttle is one of many smart cities projects. Welcome to Las Vegas, city of smart lights, self-driving shuttles and startups. Away from the glittering, casino-strewn area known as the Strip is a far more pedestrian-looking area. It's just a 15-minute drive from Las Vegas Boulevard, but it feels like a different world. It's quiet downtown, because while the Strip was thronging with 200,000 extra visitors for CES 2020 last week, the streets here were cold and empty.

Deniz Kalaslioglu is the Co-Founder & CTO of Soar Robotics a cloud-connected Robotic Intelligence platform for drones. You have over 7 years of experience in operating AI-back autonomous drones. Could you share with us some of the highlights throughout your career? Back in 2012, drones were mostly perceived as military tools by the majority. On the other hand, the improvements in mobile processors, sensors and battery technology had already started creating opportunities for consumer drones to become mainstream.

Phantom Of The Operator: Self-Driving Tech's Slowing Timetable Creates Opening For This Monitoring And Guidance Startup

A remote Phantom Auto operator monitors a Postmates delivery robot. The 2020s may yet be the decade of self-driving cars, but early predictions from automakers and tech developers including Tesla, Nissan, Nvidia and Ford that autonomous vehicles would be ready as soon as this year or next don't seem to be panning out. This week auto supply giant Magna ended a tech alliance with Lyft on self-driving robo-taxis owing to a slower-than-anticipated timetable. But the billions of dollars that have been poured into R&D and development of advanced sensors and computing the past few years are being leveraged for near-term applications, including delivery robots and self-driving trucks, as well as autonomous warehouse, cleaning and security bots. And as those vehicles proliferate, there's an increasing need to keep track of them, monitor their operations, provide remote guidance in some cases or even, in very limited circumstances, drive them remotely.

Videantis, which provides automotive deep learning, computer vision and video coding solutions, has announced that it will partner with the Fraunhofer Institute for Integrated Circuits IIS, Infineon and other leading companies and universities to develop an artificial intelligence (AI) ASIC and software development tools specifically for intelligent autonomous vehicles. The Videantis AI multi-core processor platform and tool flow has been selected for the KI-Flex autonomous driving chip project. Autonomous driving relies on fast and reliable processing and merging of data from several lidar, camera and radar sensors in the vehicle. This data can provide an accurate picture of the traffic conditions and environment to allow the vehicle to make intelligent decisions when driving. The process of intelligently analysing these volumes of sensor data requires high-performance, efficient, and versatile compute solutions.

What Smart Cities Are Learning From Smart Farms

Cities around the world are getting smarter. Already, street lights in places like San Diego are turning off, and conserving energy, when vehicles and pedestrians aren't around. Soon, connected garbage cans will tell waste haulers when they need to be emptied, optimizing collection routes. Smart buildings will notify maintenance staff of impending repair needs. And parking spots will find you, instead of the other way around.

When referring to how workplace related awareness can make a potential difference in worker behavior, a recent study of that phenomena gained national interest. The study examined the opioid drug crisis occurring in the United States. There are many thousands of deaths each year due to opioid overdoses and an estimated nearly 2 million Americans that are addicted to opioids. According to the study, part of the reason that opioid use has vastly increased over the last two decades is as a result of prescribing opioids for pain relief and for similar purposes. Apparently, medical doctors had gotten used to prescribing opioids and did so without necessarily overtly considering the downsides of becoming possibly addicted to it.