Though it's a coincidence that I'm writing this article roughly one year after my colleague Khari Johnson railed against the "public nuisance" of "charlatan AI," the annual Consumer Electronics Show (CES) clearly inspired both missives. At the tail end of last year's show, Khari called out a seemingly fake robot AI demo at LG's CES press conference, noting that for society's benefit, "tech companies should spare the world overblown or fabricated pitches of what their AI can do." Having spent last week at CES, I found it painfully obvious that tech companies -- at least some of them -- didn't get the message. Once again, there were plenty of glaring examples of AI BS on the show floor, some standing out like sore thumbs while others blended into the massive event's crowded event halls. AI wasn't always poorly represented, though: There were some legitimate and legitimately exciting examples of artificial intelligence at CES.

Artificial intelligence must be regulated to save humanity from being hit by its dangers, Google's boss has said. The potential damage the technology could do means it is "too important" not to be constrained, according to Sundar Pichai. While it has the potential to save and improve lives, it could also cause damage through misleading videos and the "nefarious uses of facial recognition", he wrote in the New York Times, calling on the world to work together to define what the future of AI should look like. Regulation would be required to prevent AI being influenced by bias, as well as protect public safety and privacy, he said. "Growing up in India, I was fascinated by technology. Each new invention changed my family's life in meaningful ways. The telephone saved us long trips to the hospital for test results. The refrigerator meant we could spend less time preparing meals, and television allowed us to see the world news and cricket matches we had only imagined while listening to the short-wave radio," he said.

Here is a wide assortment of artificial intelligence quotes. Once you read some of the quotes it is easy to see why AI is so important. "Google will fulfill its mission only when its search engine is AI-complete. You guys know what that means? "Artificial Intelligence is the new electricity." "I am telling you, the world's first trillionaires are going to come from somebody who masters AI and all its derivatives,and applies it in ways we never thought of." "Cyber hygiene, patching vulnerabilities, security by design, threat hunting and machine learning based artificial intelligence are mandatory prerequisites for cyber defense against the next generation threat landscape." "Every serious technology company now has an Artificial Intelligence team in place.

ABOUT A CENTURY ago, engineers created a new sort of space: the control room. Before then, things that needed control were controlled by people on the spot. But as district heating systems, railway networks, electric grids and the like grew more complex, it began to make sense to put the controls all in one place. Dials and light bulbs brought the way the world was working into the room. Levers, stopcocks, switches and buttons sent decisions back out. By the 1960s control rooms had become a powerful icon of the modern. At Mission Control in Houston, young men in horn rimmed glasses and crewcuts sent commands to spacecraft heading for the Moon. In the space seen through television sets, travellers exploring strange new worlds did so within an iconic control room of their own: the bridge of Star Trek's USS Enterprise. A hexagonal room built in Santiago de Chile a decade later fitted right into the same philosophy--and aesthetic. It had an array of screens full of numbers and arrows. It was linked to a powerful computer. It had futuristic swivel chairs, complete with geometric buttons in the armrests to control the displays.

Council Post: Do You Want AI Used On You At The Hospital? 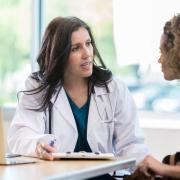 If you ask the average person for a working definition of artificial intelligence (AI), you're likely to receive a slew of answers that boil down to the same concept: robots. Most nonexperts are still receiving their information on AI from science fiction films and clickbait articles with headlines adjacent to "Machines to Replace Humans by 2030." It's no wonder, then, why patients would be apprehensive toward AI in a hospital setting. They want a doctor to handle their treatment, not a computer. But what these patients don't often know is that AI is already being used in hospitals globally.

Futuristic 'driverless pods' are transporting passengers around a shopping centre

Futuristic'driverless pods' are transporting passengers around a shopping centre near Bristol as part of a trial that could see them rolled out across the UK. The trial is being run by infrastructure company AECOM and, if successful, could lead to a full'open road' trial later in the year. AECOM is testing the vehicles at The Mall, Cribbs Causeway, just north of Bristol to see how they navigate large everyday obstacles. The British-made electric vehicles operate entirely autonomously, so the team wanted to test them in an area with pedestrians, scooters, bikes and animals. This is the first trial of the future transportation solution that will not have a'supervisor' monitoring the controls while passengers are inside the moving pod For the trial a pod will drive between the shopping centre and its car park, giving people a'taster' of what it is like to travel inside, says AECOM.

Zenuity, a developer of software for self-driving cars, is tapping HPE for the end-to-end IT infrastructure it needs to gather, store and analyze data from its test vehicles and development centers. What is AI? Everything you need to know about Artificial Intelligence "HPE is providing us with the foundations upon which everything else is built," Zenuity CEO Dennis Nobelius. HPE has in the past year stepped up its focus on supporting HPC, AI and analytics workloads. Last year, the company spent $1.3 billion to acquire Cray, one of the leading players in supercomputing, and rolled out a revamped HPC portfolio with Cray technology. The new deal also fits in with HPE's ambitions to offer all of its products "as a service" by 2022.

The not-a-car sits on the gleaming black stage surrounded by a halo of light. It's orange and black and white, and roughly the same size as a crossover SUV, but somehow looks much larger from the outside. There is no obvious front to the vehicle, no hood, no driver or passenger side windows, no side-view mirrors. The symmetry of the exterior is oddly comforting. I am one of the first non-employees to see it, after being invited by self-driving company Cruise to come out to San Francisco for an early look.

Inside the First Church of Artificial Intelligence Backchannel

Anthony Levandowski makes an unlikely prophet. Dressed Silicon Valley-casual in jeans and flanked by a PR rep rather than cloaked acolytes, the engineer known for self-driving cars--and triggering a notorious lawsuit--could be unveiling his latest startup instead of laying the foundations for a new religion. But he is doing just that. Artificial intelligence has already inspired billion-dollar companies, far-reaching research programs, and scenarios of both transcendence and doom. Now Levandowski is creating its first church.