A Telegram bot network is being used to create deepfake nudes

A security firm called Sensity says it recently discovered a network of deepfake bots on chat app Telegram creating computer-generated naked images of women on request. You might expect the software spent most of its time processing images of celebrities, but it seems most people used it to create naked photos of women they know in real life. The majority of people using the software, some 70 percent, come from Russia, a country that had up until only recently banned Telegram. 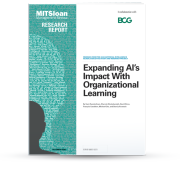 Chithrai is the Chief Technology and Innovation Officer (CTIO) for InfoVision. It is no longer a secret that big data is a reason behind the successes of many major technology companies. However, as more and more companies embrace it to store, process and extract value from their huge volume of data, it is becoming a challenge for them to use the collected data in the most efficient way. That's where machine learning can help them. Data is a boon for machine learning systems.

Intel, Ubotica, and the ESA launch the first AI satellite

Intel, Ubotica, and the European Space Agency (ESA) have launched the first AI satellite into Earth's orbit. The PhiSat-1 satellite is about the size of a cereal box and was ejected from a rocket's dispenser alongside 45 other satellites. The rocket launched from Guiana Space Centre on September 2nd. Intel has integrated its Movidius Myriad 2 Vision Processing Unit (VPU) into PhiSat-1 – enabling large amounts of data to be processed on the device. This helps to prevent useless data being sent back to Earth and consuming precious bandwidth.

Seven principles for AI: BMW Group sets out code of ethics for the use of artificial intelligence.

The use of artificial intelligence (AI) is a central element of the digital transformation process at the BMW Group. The BMW Group already uses AI throughout the value chain to generate added value for customers, products, employees and processes. Michael Würtenberger, Head of "Project AI": "Artificial intelligence is the key technology in the process of digital transformation. But for us the focus remains on people. AI supports our employees and improves the customer experience. We are proceeding purposefully and with caution in the expansion of AI applications within the company. The seven principles for AI at the BMW Group provide the basis for our approach."

Technology is always scrutinized under the lens of scepticism. Despite the many advancements, Artificial Intelligence and its subsidiaries are contributing to; the biases in algorithms remain the biggest challenge amongst experts. Specifically, if the technology is integrated into the draconian laws, the infringement of human rights gets amplified. George Floyd's death casts a shadow on the misuse of technology by authorities. And while tech organizations have apprehended about the negative impact of the technology in society, some organizations are perilously using this technology.

A collection of commonly used machine learning terms, and what they mean. The algorithm used to find the gradient of the loss function with respect to the individual weights. It works by repeatedly applying the chain rule. Statistical bias is the systematical difference in a models hypothesis and and the true distribution. In neural networks, bias can also refer to the bias unit which always takes the value of 1, and functions as threshold for a neuron's activation.

The accounting technology journey: From paper to artificial intelligence

We'll explore the past, present and future of technology in Accounting and Finance and how AI technology is redefining and modernizing business processes in the industry. While the "old way" may seem comfortable, over 50% of Accounts Payables and Finance departments are adapting and evolving with modern technology to digitally transform their data to make more informed and faster decisions. AP departments can yield positive outcomes in many areas toward cost savings, accuracy and productivity with AI technology.

Artificial Intelligence (AI) can be defined as the field of study of Intelligent Agents, or a system's ability to correctly interpret external data, to learn from such data, and to use those learnings to achieve specific goals and tasks through flexible adaptation, or something that enables machines to learn, think, execute and problem solve like a human being or more colloquially, the term "artificial intelligence" is often used to describe machines (or computers) that mimic cognitive functions that humans associate with the human mind, such as learning and problem solving. A quip in Tesler's Theorem says "AI is whatever hasn't been done yet". Artificial intelligence was founded as an academic discipline in 1955. The field was founded on the assumption that human intelligence "can be so precisely described that a machine can be made to simulate it". Smart machines think alike human beings and have necessary memory built in so that, it can outsmart human beings. So it would seem that AI is a very powerful technology, and like other powerful technologies would like to be used by big corporations to boost productivity, make their products more user friendly or intelligent and in-turn gain customers.