Activision Blizzard reported another quarter of record-setting financial results, with each of its core franchises delivering better-than-expected returns, including Call of Duty, World of Warcraft, Hearthstone, Overwatch and Candy Crush. Activision had 125 million monthly active users in the second quarter, while Blizzard had 32 million, and the company overall reported GAAP net revenues of $1.93 billion, up from $1.4 billion in 2019. Growth across the company's games was spurred by shelter-in-place orders amid the global pandemic. It also happened amid upheaval at Activision Blizzard itself. Activision Blizzard is facing growing pressure from employees and stockholders to address wage disparities at the company.

Despite being a childless, science-fiction-loving grad student with nothing but time on my hands back in 2008, I somehow missed Terminator: The Sarah Connor Chronicles when it was on TV. Created by Josh Friedman, The Sarah Connor Chronicles was canceled after two seasons and 31 episodes, despite mostly-positive critical reception. Binging it under pandemic conditions, as I have been recently, has been unexpectedly cathartic. This is a show about people living in a sunny, beautiful, Southern Californian present day while haunted by the knowledge that a grim future might be coming, unless they change it by their actions. It's also about parenting under stress and feeling constantly under siege by inescapable circumstance, which--well, if that's too real, you can always focus on the nifty killer cyborgs instead.

The best smart light strips of 2020

We fell in love with the LIFX Z LED strip lights for their incredibly simple set up, ease of use, and variety of awesome features. The Lifx Z LED Strip Kit impressed us from the very beginning. In what felt like a blink of an eye, we had these dimmable lights connected to Alexa, Google Assistant, and Siri. It also works with IFTTT, SmartThings, Nest, Arlo, Flic, and more. The strip is very responsive when controlled using the Lifx app on iOS and Android devices (keep in mind that HomeKit is only available on Apple smartphones and tablets). Although these weren't the brightest lights we tested, they put off a vivid glow that easily illuminates a dark room. These smart lights have a noticeably thicker strip than the set from Govee, but less chunky than the C by GE set we tested. 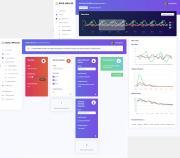 Artificial intelligence used to happen almost exclusively in the cloud, but this introduces delays (latency) for the users and higher costs for the provider, so it's now very common to have on-device AI on mobile phones or other systems powered by application processors. But recently there's been a push to bring machine learning capabilities to even lower-end embedded systems powered by microcontrollers, as we've seen with GAP8 RISC-V IoT processor or Arm Cortex-M55 core and the Ethos-U55 micro NPU for Cortex-M microcontrollers, as well as Tensorflow Lite. Edge Impulse is another solution that aims to ease deployment of machine learning applications on Cortex-M embedded devices (aka Embedded ML or TinyML) by collecting real-world sensor data, training ML models on this data in the cloud, and then deploying the model back to the embedded device. The company collaborated with Arduino and announced support for the Arduino Nano 33 BLE Sense and other 32-bit Arduino boards last May. The solution supports motion sensing, computer vision, and audio recognition to detect glass breaking, hydraulic shocks, manufacturing defects, and so on.

Advances in Artificial Intelligence (AI) and computer processors have opened new ways for face recognition online services not possible before. Startups all over the world are developing Apps and products that make use of Face Recognition. Moreover, they are bringing products into the market with user authentication, attendance tracking and photo grouping (for event photographers) capabilities, to name a few. Face Recognition Online software components are challenging to develop in-house. For this reason, it makes sense for startups and software companies to buy this capability from specialized vendors.

Solving One of the Biggest Challenges for AI-Based Search Engines: Relevance

Let's learn how to implement ClickModels in order to extract Relevance from clickstream data. These steps tend to be what is already necessary for implementing an effective enough search engine system for a given application. Eventually, the requirement to upgrade the system to deliver customized results may arise. Doing so should be simple. One could choose from a set of machine learning ranking algorithms, train some selected models, prepare them for production and observe the results.

Our consultancy services provide the expertise necessary to build practical solutions that address the immediate and long term needs of your business. We support the full cycle of organisational development, helping you build and train the required in-house analytics capability to deliver a data-centric strategy. The Data Science Business Map below shows some of the key ways in which data science and AI can transform your business - contact us for more information.

Machine vision has come a long way from the simpler days of cameras attached to frame grabber boards--all arranged along an industrial production line. While the basic concepts are the same, emerging embedded systems technologies such as Artificial Intelligence (AI), deep learning, the Internet-of-Things (IoT) and cloud computing have all opened up new possibilities for machine vision system developers. To keep pace, companies that used to only focus on box-level machine vision systems are now moving toward AI-based edge computing systems that provide all the needed interfacing for machine vision, but also add new levels of compute performance to process imaging in real-time and over remote network configurations. AI IN MACHINE VISION ADLINK Technology appears to be moving in this direction of applying deep learning and AI to machine vision. The company has a number of products, listed "preliminary" at present, that provide AI machine vision solutions. These systems are designed to be "plug and play" (PnP) so that machine vision system developers can evolve their existing applications to AI-enablement right away with no need to replace existing hardware.

Knowledge of languages is the doorway to wisdom. I was amazed that Roger Bacon gave the above quote in the 13th century, and it still holds, Isn't it? I am sure that you all will agree with me. Today, the way of understanding languages has changed a lot from the 13th century. We now refer to it as linguistics and natural language processing.

Ubiquitous facial recognition is a serious threat to privacy. The idea that the photos we share are being collected by companies to train algorithms that are sold commercially is worrying. Anyone can buy these tools, snap a photo of a stranger, and find out who they are in seconds. But researchers have come up with a clever way to help combat this problem. The solution is a tool named Fawkes, and was created by scientists at the University of Chicago's Sand Lab.