In December, the University of Texas at Austin's computer science department announced that it would stop using a machine-learning system to evaluate applicants for its Ph.D. program due to concerns that encoded bias may exacerbate existing inequities in the program and in the field in general. This move toward more inclusive admissions practices is a rare (and welcome) exception to a worrying trend in education: Colleges, standardized test providers, consulting companies, and other educational service providers are increasingly adopting predatory, discriminatory, and outright exclusionary student data practices. Student data has long been used as a college recruiting and admissions tool. In 1972, College Board, the company that owns the PSAT, the SAT, and the AP Exams, created its Student Search Service and began licensing student names and data profiles to colleges (hence the college catalogs that fill the mail boxes of high school students who have taken the exams). Today, College Board licenses millions of student data profiles every year for 47 cents per examinee.

This team of high schoolers is building accessibility with free, 3D-printed prosthetics

For this first time in his life, Pete Peeks was able to use both hands to hang Christmas lights outside his house this year -- thanks to the help of a high school robotics team. Peeks, 38, was born without the full use of his right hand, and though many may take gripping a nail, hammering it in and stringing holiday lights for granted, Peeks said it was beyond his wildest dreams. Early this month, he became one of the latest clients of the Sequoyah High School Robotics Team in Canton, Georgia. The team has designs and 3D- printed custom prosthesis to send for free to people around the world who need them. And as Americans gather for the winter holidays, the students will be at home continuing their work.

How AI works: An introduction coming to a school near you

The critical importance of tech skills across industries sends a clear signal: In order to meet the expectations of future administrators and employers, elementary to high school students will need to learn expertise unavailable to their parents' generation. Today's leading innovation technology is machine learning, and to address the need for this vital skill set, the latest offering from the longtime partnership of Microsoft and code.org is a new course in artificial intelligence (AI) and its societal and ethical implications designed for students in elementary and high school. AI's relevance cannot be understated, as it is the very basis for self-driving cars, but it also powers devices we've already become accustomed to, such as Amazon Alexa, interactive programming, telemed appointments, and online learning. Those are some very big responsibilities to be tackled by Gen Z. As code.org points out,despite the great benefits to society, the ethical impact can't be ignored: "How does algorithmic bias impact social justice or deep fakes impact democracy? How does society cope with rapid job automation? By learning how to consider the ethical issues that AI raises, these future computer scientists will be better able to envision the appropriate safeguards that help to maximize the benefits of AI technologies and reduce their risks."

Using the NASA moon rover as their inspiration, robotics students at Lake City Secondary School are nearing completion of a working, remote-controlled, wheeled robot rover of their own design. The rover, named The Helios Vulturem (Helios was the Greek titan of the sun, and Vulturem is Latin for Falcon -- the school's mascot and namesake) was designed by Grade 12 robotics students Nathan Cisecki, Jonathan Wolfe, Jayden Guichon, Eric DeVuyst and Colby Ostrom under the guidance of robotics teacher Nick MacDonald, along with some assistance from Grade 11/12 metalwork students Cole Rochefort and Cameron Smithson. The students began the year disassembling a broken-down, miniature quad to eliminate broken parts and repair salvageable ones, while the metalwork students welded the broken steering column and assisted in the reconfiguration of the chassis. "We'd seen this quad sitting up there on a shelf in Mr. MacDonald's class in Grade 10, and he mentioned to us it would be our senior year project, but we never thought we'd be able to make it into a rover," Ostrom said. Four years has led up to this," Cisecki added.

We propose EXAMS -- a new benchmark dataset for cross-lingual and multilingual question answering for high school examinations. We collected more than 24,000 high-quality high school exam questions in 16 languages, covering 8 language families and 24 school subjects from Natural Sciences and Social Sciences, among others. EXAMS offers a fine-grained evaluation framework across multiple languages and subjects, which allows precise analysis and comparison of various models. We perform various experiments with existing top-performing multilingual pre-trained models and we show that EXAMS offers multiple challenges that require multilingual knowledge and reasoning in multiple domains. We hope that EXAMS will enable researchers to explore challenging reasoning and knowledge transfer methods and pre-trained models for school question answering in various languages which was not possible before. The data, code, pre-trained models, and evaluation are available at https://github.com/mhardalov/exams-qa.

High school students across the state of Texas have a new resource to guide them through the college application process, thanks to a public-private partnership announced today by the Texas Higher Education Coordinating Board (THECB). The new initiative will tap AdmitHub's pioneering technology to enable students to access ADVi, a conversational artificial intelligence (AI) chatbot that offers proactive, personalized guidance to help students navigate their way to and through college. ADVi can communicate with students 24/7 via text message, and if students need additional support, directs them to a cohort of live advisers who are trained and funded through a partnership with the College Advising Corps. Texas students may access ADVi by texting "COLLEGE" to 512-829-3687 or starting a freshman application in ApplyTexas. The THECB launched the text messaging tool this month to 60,000 high school seniors who opted into receiving messages in their ApplyTexas applications. 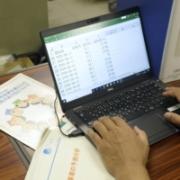 Nearly 30 local governments are planning to or are interested in introducing an artificial intelligence system designed to assess the seriousness of school bullying cases in hopes of better responding to them, a source close to the matter said Thursday. Otsu Municipal Government, which came under fire for the way it handled a high-profile bullying case in 2011, has teamed up with information technology services provider Hitachi Systems Ltd., to develop the AI system, which predicts how a case of bullying has the potential to become serious based on an analysis of past cases. School bullying has long been a concern in Japan, with education ministry data showing that elementary, junior and high schools as well as special-needs schools nationwide reported 612,496 cases in the year through March, up 68,563 from a year earlier. When a new case of bullying is reported, information on the incident, such as time, place and perpetrator, is fed into the system, which then searches its database to come up with an estimate of how serious the case is, expressed as a percentage. In all, about 50 pieces of data are used for analysis.

Marblehead High School will return to all-remote learning for at least two weeks after police broke up a "large" student party over the weekend where revelers were gathered "without social distancing or face coverings, sharing drinks," school officials said. "In choosing to ignore the rules set down by the Governor and our community in the pandemic, however, we are not just endangering individuals… we are also potentially harming the community at large," Superintendent John J. Buckey wrote in a letter to families. Many students "scattered" when police responded to break up the party on Friday, making it impossible to identify and quarantine individuals involved, Buckey said. Buckey pointed to a "troubling pattern of behavior in play" in Marblehead and other school districts and said the Friday party was not a singular event. "We all know this is not a new thing for teenagers. However, these are not ordinary times," Buckey said in the letter.

In "The Code Detectives," two middle school girls who love coding use artificial intelligence to solve mysteries. For 17-year-old author Ria Dosha, writing the book series is a way to advocate for increasing diversity within the technology field. "I've brought a diverse cast of characters to life, with the series centering around Ramona Diaz, a powerful young girl of color," says Ria, a student at Cupertino's Monta Vista High School. "The book series gives young girls strong, fictional role models in technology and AI, and introduces them to AI topics in a compelling way, clearing common misconceptions." Ria writes what shoe knows, and vice versa.

As a challenge problem for AI systems, I propose the use of hand-constructed multiple-choice tests, with problems that are easy for people but hard for computers. Specifically, I discuss techniques for constructing such problems at the level of a fourth-grade child and at the level of a high-school student. For the fourth grade level questions, I argue that questions that require the understanding of time, impossible or pointless scenarios, of causality, of the human body, or of sets of objects, and questions that require combining facts or require simple inductive arguments of indeterminate length can be chosen to be easy for people, and are likely to be hard for AI programs, in the current state of the art. For the high-school level, I argue that questions that relate the formal science to the realia of laboratory experiments or of real-world observations are likely to be easy for people and hard for AI programs. I argue that these are more useful benchmarks than existing standardized tests such as the SATs or Regents tests.