Will Robot Musicians replace real ones?

Artificial Intelligence seems to be taking over our lives and replacing jobs wherever possible. In the foreseeable future, there are quite a few professions that come to mind where robots can phase humans out. Uber drivers can be a thing of the past with self-driving cars, and data-entry positions can eventually be automated. And robot telemarketers have likely called your phone more than once this week. AI is tapping into nearly every market-even the music industry.

Artificial intelligence (AI) is being used to create new'deepfake' pop songs that sound like they're being performed by dead musicians, including Elvis Presley, Frank Sinatra, David Bowie and Michael Jackson. Jukebox, created by California-based company OpenAI, is a neural network that generates eerie approximates of pop songs in the style of multiple artists. The neural network generates music, including rudimentary singing complete with lyrics in English and a variety of instruments like guitar and piano. OpenAI has created a expansive library of new tracks, imitating a diverse selection of artists, including the Beatles, Nirvana, Katy Perry, Simon and Garfunkel, Stevie Wonder, Elton John and Ed Sheeran, as well as deceased heroes that almost appear to be brought back to life. Most of the samples have a bizarre, faraway quality to them, as if they're poorly produced demos from the 1950s that haven't seen the light of day until now.

Their outputs inspired me to start my own journey of intersecting music with machine learning. I've been composing since I was a kid on whatever platform I could find. Classically trained with a music degree while hungry for as much new music as possible makes for a strange hybrid, a musician and performer trying to understand a technologist's world. Amid much struggling and general frustration and many false starts, the stubbornness and late night wrangling paid off. I had my first track and plucked up the courage to share some of my experiments online.

Deep the Beatles!, by DADABOTS 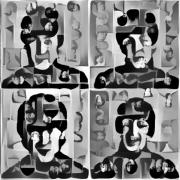 We are making such material available non-commercially in an effort to educate and advance research in machine learning, generative music, music information retrieval, computational creativity, etc. We believe this constitutes a'fair use' of any such copyrighted material as provided for in section 107 of the US Copyright Law.

The Beatles were a huge cultural phenomenon. Their timeless music still resonates with people today, both young and old. In my humble opinion, they are the greatest band to have ever lived¹. Their songs are full of interesting lyrics and deep ideas. When you've seen beyond yourself Then you may find peace of mind is waiting there² However, the thing that made the Beatles great was their versatility.

John Lennon and Paul McCartney were one of the Twentieth Century's most celebrated musical writing partnerships. Exactly what elements each of the pair contributed to their joint-credited hits has been a matter of much debate among fans, however. Now, researchers have used AI to work out which Beatle penned the music for a number of their most disputed songs. Scientists from Harvard and Dalhousie University in Canada trained their software using the Beatles back catalogue to recognise 137 unique musical patterns. These patterns, including notes, chords, and other musical motifs, were applied to eight disputed pieces of music to work out which of the Beatles wrote them.

On some level, the project seems emblematic of the "automated composer" approach to A.I. music, fundamentally dedicated to mimicking styles of the past. But true to their name, DADABOTS also have a healthy sense of the absurd. They are as fascinated by the failures of A.I. to convincingly replicate existing music as they are by its successes. On their first album, the duo trained a machine learning model on the musical catalog of the Beatles, an unsurprising favorite of machine learning enthusiasts of all types. The album, entitled Deep the Beatles, makes an explicit connection between the neural network's training data and its musical output--a connection listeners wouldn't necessarily make without being told.

Artificial intelligence has been used to generate an endless stream of death metal music which will play on YouTube for 24 hours a day. The creation comes from two US programmers who built a virtual band known as'Dadabot'. It creators are now letting the technology play forever via a live stream called'Relentless Doppelganger' on the video-sharing platform. An AI system has been programmed to generate heavy metal music on YouTube 24 hours a day, with the aim to do so until'infinity'. Dadabot, and its continual supply of music, was trained using a large amount of music from Canadian death metal band Archspire.

Thousands of songwriters have honed their skills listening to the Beatles – now there's one more. An AI developed by a team at Snap, the company that owns the social network Snapchat, has learned to write pop songs in the style of the Fab Four. Computers have been composing music for years. Many video games use computer generated soundtracks and AI-composed symphonies have been performed by live orchestras.