"The addition of these faculty is expanding our interdisciplinary cohort of AI researchers across the entire campus. We expect these four outstanding faculty members are the first wave of hires who will increase our capabilities for AI and machine learning research across all five of Rensselaer's schools," said James Hendler, director of the AIRC, and a Rensselaer Tetherless World Professor of Computer, Web, and Cognitive Science. The Rensselaer-IBM AIRC is dedicated to advancing the science of artificial intelligence and enabling the use of AI and machine learning in research investigations, innovations, and applications of joint interest to both Rensselaer and IBM. The collaboration fosters the growth of AI and machine learning capabilities through faculty hires, by funding specific research initiatives, and through funding top graduate students as IBM AI Horizons fellows. For more information about the AIRC, watch this video.

"AI: More than Human," an exhibition that appeared at London's Barbican Art Gallery this past summer and can now be seen at the Forum in Groningen, the Netherlands, mirrors the muddled zeitgeist of artificial intelligence. It seeks to bring together the various elements of art, research, and commerce, displaying interactive installations as well as projects applying AI in fields as diverse as agriculture and neuroscience. Rather than untangle these distinct areas, Barbican curator Anna Holsgrove has chosen to intermix them under sections titled the Dream of AI, Mind Machines, Data Worlds, and Endless Evolution. I saw the show in the company of computational artist Memo Akten, who has been at the forefront of many micro-movements, learning new tools to study how they expand human creativity. At the Barbican, Akten presented the latest iteration of Learning to See (2017), an interactive installation in which machine-learning software analyzes a live feed from a camera pointed at a table covered with everyday objects.

The connectivity between brain cells plays a significant role in the function of the brain. In general, brain regions and their interactions can be modeled as complex brain network, which describes highly efficient information transmission in a brain. To study brain networks in detail, neuroscientists use various neuroimaging techniques. Last year, in collaboration with Janelia Research Campus and Cambridge University, Google published a study that represents the automated reconstruction of an entire fruit fly brain. The study mainly focused on the individual shape of the cells.

In Estonia, artificial intelligence will play a crucial role in the future of human beings. It will play a crucial role in the functioning of judicial institutions, which is a great innovation. According to the authorities in this Baltic country, they are empowered to arbitrate cases of minor offenses autonomously. Minor offenses will therefore no longer necessarily be the responsibility of judges or registrars. With the use of artificial intelligence, these authorities will be able to tackle more complex cases that require human intelligence.

I am uploading videos to this channel regularly, mostly daily. This channel mainly focuses on Science and Technology related stuff, especially the latest news in Robotics, 3D printing, Virtual Reality, Drones, Artificial Intelligence and nanotechnology. Our channel has few videos about the General Knowledge quiz, Puzzles, and Brain Teasers. I am planning to add a few tutorial videos about software testing and web development. And, I will give updates about our products on this channel.

Air's Nicola Godin gives Kyle Meredith a call to discuss his latest solo album, Concrete and Glass, a concept record that has roots in his love for architecture. Godin speaks about the larger topics in play, working alongside Hot Chip's Alexis Taylor, and why we'll have entire AI-made music on the charts within a year. The two also explore the current trend of minimalism in pop music, his love for sensuality within his own songs, his thoughts on the 20th anniversary of The Virgin Suicides soundtrack, and his hopes to one day provide music for a sci-fi movie. Kyle Meredith With… is an interview series in which WFPK's Kyle Meredith speaks to a wide breadth of musicians. Every Monday, Wednesday, and Friday, Meredith digs deep into the artist's work to find out how the music is made and where their journey is going, from legendary artists like Robert Plant, Paul McCartney, U2 and Bryan Ferry, to the newer class of The National, St. Vincent, Arctic Monkeys, Haim, and Father John Misty. 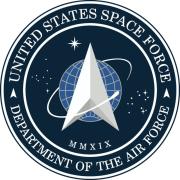 WASHINGTON – President Donald Trump unveiled the logo for the U.S. Space Force on Friday, attracting critics who said America's newest military branch had boldly gone where "Star Trek" went before. With a central symbol resembling an arrowhead, ringed by an orbiting object and set to a starry backdrop, many people argued the design was pilfered from the famous science fiction franchise. But a spokesman for the branch hit back, arguing that the "Delta" emblem had been used by U.S. Air Force space organizations as early as 1961, before the first Star Trek show aired. The emblem also closely resembles the "widget" logo adopted by Delta Air Lines in 1959. "After consultation with our Great Military Leaders, designers, and others, I am pleased to present the new logo for the United States Space Force, the Sixth Branch of our Magnificent Military!" wrote Trump of the branch he championed and which came into being in December 2019.