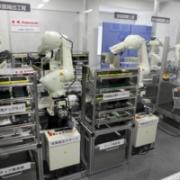 Health minister Norihisa Tamura watched a demonstration Tuesday of a prototype automated COVID-19 testing machine that uses a robotic arm to take a sample from a person's nose and can deliver the results in about 80 minutes. The robot system, built by Kawasaki Heavy Industries Inc., fits in a standard shipping container that can be transported by truck and set up at stadiums, theme parks and other mass gatherings, the company said. "Looking at the global trend, we need to increase the number of people receiving tests, and the demand for preventive testing is rising," Tamura told reporters at the demonstration. Prime Minister Yoshihide Suga's administration has attracted criticism for Japan's paucity of testing. His government is under pressure to show it has the pandemic under control with fewer than 200 days until the start of the Summer Olympics in Tokyo -- already delayed by a year -- and vaccinations yet to start.

A Quick Overview of Regression Algorithms in Machine Learning

We basically train machines so as to include some kind of automation in it. In machine learning, we use various kinds of algorithms to allow machines to learn the relationships within the data provided and make predictions using them. So, the kind of model prediction where we need the predicted output is a continuous numerical value, it is called a regression problem. Regression analysis convolves around simple algorithms, which are often used in finance, investing, and others, and establishes the relationship between a single dependent variable dependent on several independent ones. For example, predicting house price or salary of an employee, etc are the most common regression problems.

How AI Will Impact Both Cybersecurity and Cyber Attacks

Cybersecurity is set to be one of the areas most impacted by artificial intelligence (AI) technologies, with both organizations and cyber criminals deploying AI in their own ways. As AI increases the risk and effectiveness of cyber attacks, organizations must also increase their efforts. The future outcomes of such attacks will greatly depend on who has a better grasp of AI technologies. As we become more of a digital world, the risk of AI-powered cyber attacks also dramatically increases. AI and machine learning are not only used by IT security professionals, but they are deployed by state-sponsored actors, criminal cyber organizations, and individuals.

Anewly designed artificial intelligence tool based on the structure of the brain has identified a molecule capable of wiping out a number of antibiotic-resistant strains of bacteria, according to a study published on February 20 in Cell. The molecule, halicin, which had previously been investigated as a potential treatment for diabetes, demonstrated activity against Mycobacterium tuberculosis, the causative agent of tuberculosis, and several other hard-to-treat microbes. The discovery comes at a time when novel antibiotics are becoming increasingly difficult to find, reports STAT, and when drug-resistant bacteria are a growing global threat. The Interagency Coordination Group (IACG) on Antimicrobial Resistance convened by United Nations a few years ago released a report in 2019 estimating that drug-resistant diseases could result in 10 million deaths per year by 2050. Despite the urgency in the search for new antibiotics, a lack of financial incentives has caused pharmaceutical companies to scale back their research, according to STAT. "I do think this platform will very directly reduce the cost involved in the discovery phase of antibiotic development," coauthor James Collins of MIT tells STAT.

The Fear of Artificial Intelligence in Job Loss

With all the hype over Artificial Intelligence, there is additionally a lot of disturbing buzz about the negative results of AI. More than one-quarter (27%) of all employees state they are stressed that the work they have now will be disposed of within the next five years because of new innovation, robots or artificial intelligence, as indicated by the quarterly CNBC/SurveyMonkey Workplace Happiness review. In certain industries where technology already has played a profoundly disruptive role, employees fear of automation likewise run higher than the normal: Workers in automotives, business logistics and support, marketing and advertising, and retail are proportionately more stressed over new technology replacing their jobs than those in different industries. The dread stems from the fact that the business is already witnessing it. Self-driving trucks already are compromising the jobs of truck drivers, and it is causing a huge frenzy in this job line.

The 5 Hottest Technologies In Banking For 2021

In the movie All The President's Men, Woodward and Bernstein meet their informant in a parking garage who tells them: "Follow the money." If you want to know which technologies are hot in banking, you should do the same. The truly "hot" technologies in banking are the ones that financial institutions invest in--not necessarily the ones the pundits talk about. At the end of the past seven years, Cornerstone Advisors has surveyed financial institutions to find out where their technology dollars will go in the coming year. In Cornerstone's What's Going On in Banking 2021 study, the top five technologies for 2021 are: 1) Digital account opening; 2) Application programming interfaces (APIs); 3) Video collaboration; 4) P2P payments; and 5) Cloud computing.

Up-to-date and business-ready data have become more important than ever. Quarterly forecasts are no longer enough. Thus, artificial intelligence (AI) and machine learning are being introduced to increase the accuracy and timeliness of alerts, data refreshes, and more frequent forecasts. Supply chain disruption and unnecessary panic buying of items like toilet paper can be tackled by tying AI into data feeds to ensure current, accurate information. This is all about making data business ready. That means it must be curated for analytics consumption, made accessible as close to real time as possible, and tied into business logic to provide detailed insights.

"As you identify more and more examples of covert payment the AI learns on the fly. That's the beauty and the magic of AI," says Mr Mason. A scoring system was set up, with points added for certain attributes. Any score above a certain number was deemed worthy of further investigation. The machine-learning technology became better and better as it progressed.