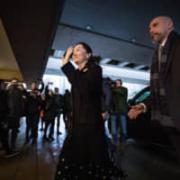 BRUSSELS – The EU's proposal for a temporary ban on facial-recognition technology won backing from Alphabet Chief Executive Sundar Pichai on Monday but got a cool response from Microsoft President Brad Smith. While Pichai cited the possibility that the technology could be used for nefarious purposes as a reason for a moratorium, Smith said a ban was akin to using a meat cleaver instead of a scalpel to solve potential problems. "I think it is important that governments and regulations tackle it sooner rather than later and give a framework for it," Pichai told a conference in Brussels organized by think-tank Bruegel. "It can be immediate but maybe there's a waiting period before we really think about how it's being used," he said. "It's up to governments to chart the course" for the use of such technology.

The head of Google and parent company Alphabet has called for artificial intelligence (AI) to be regulated. Writing in the Financial Times, Sundar Pichai said it was "too important not to" impose regulation but argued for "a sensible approach". He said that individual areas of AI development, like self-driving cars and health tech, required tailored rules. Last week it was revealed that the European Commission is considering a five-year ban on facial recognition. Earlier this month, the White House published its own proposed regulatory principles and urged Europe to "avoid heavy-handed innovation-killing models".

Google's chief executive called Monday for a balanced approach to regulating artificial intelligence, telling a European audience that the technology brings benefits but also "negative consequences." Sundar Pichai's comments come as lawmakers and governments seriously consider putting limits on how artificial intelligence is used. "There is no question in my mind that artificial intelligence needs to be regulated. The question is how best to approach this," Pichai said, according to a transcript of his speech at a Brussel-based think tank. He noted that there's an important role for governments to play and that as the European Union and the U.S. start drawing up their own approaches to regulation, "international alignment" of any eventual rules will be critical.

Soft Robotics Inc., a pioneer in robotic grasping, announced today that it has raised $23 million in an oversubscribed Series B funding round. The round was co-led by Calibrate Ventures and Material Impact and included existing investors Honeywell, Hyperplane, Scale, Tekfen Ventures, and Yamaha. FANUC Corp., the world's largest industrial robot manufacturer, joined this round as a new investor in Soft Robotics. Soft Robotics previously announced a strategic partnership with FANUC to integrate Soft Robotics' mGrip adaptable gripper system with any FANUC robot through the deployment of a new controller. The combined product was introduced at IREX in Tokyo in December 2019.

Alphabet and Google CEO, Sundar Pichai, is the latest tech giant kingpin to make a public call for AI to be regulated while simultaneously encouraging lawmakers towards a dilute enabling framework that does not put any hard limits on what can be done with AI technologies. In an op-ed published in today's Financial Times, Pichai makes a headline-grabbing call for artificial intelligence to be regulated. But his pitch injects a suggestive undercurrent that puffs up the risk for humanity of not letting technologists get on with business as usual and apply AI at population-scale -- with the Google chief claiming: "AI has the potential to improve billions of lives, and the biggest risk may be failing to do so" -- thereby seeking to frame'no hard limits' as actually the safest option for humanity. Simultaneously the pitch downplays any negatives that might cloud the greater good that Pichai implies AI will unlock -- presenting "potential negative consequences" as simply the inevitable and necessary price of technological progress. It's all about managing the level of risk, is the leading suggestion, rather than questioning outright whether the use of a hugely risk-laden technology such as facial recognition should actually be viable in a democratic society.

Yes, companies use AI to automate various tasks, while consumers use AI to make their daily routines easier. But governments–and in particular militaries–also have a massive interest in the speed and scale offered by AI. Nation states are already using artificial intelligence to monitor their own citizens, and as the UK's Ministry of Defence (MoD) revealed last week, they'll also be using AI to make decisions related to national security and warfare. The MoD's Defence and Security Accelerator (DASA) has announced the initial injection of £4 million in funding for new projects and startups exploring how to use AI in the context of the British Navy. In particular, the DASA is looking to support AI- and machine learning-based technology that will "revolutionise the way warships make decisions and process thousands of strands of intelligence and data."

Save big on the things you actually want on your day off. Purchases you make through our links may earn us a commission. If you're lucky enough to have the day off, you should treat yourself a little further with some online shopping. Even better, you can get incredible discounts on the products you actually want thanks to all of the holiday sales. For example, top-rated iRobot Roombas, weighted blankets, and travel mugs are all on sale at Amazon--and you don't want to pass up on these savings.

Sundar Pichai, CEO of Google and Alphabet, speaks about artificial intelligence during a Bruegel think tank conference in Brussels, Belgium, on Jan. 20, 2020. The chief executive of Google parent company Alphabet on Monday backed an EU proposal to temporarily ban facial-recognition technology because of the possibility that it could be used for nefarious purposes. "I think it is important that governments and regulations tackle it sooner rather than later and gives a framework for it," Sundar Pichai told a conference in Brussels organized by think tank Bruegel. The European Commission, which acts as the EU executive, is taking a tougher line on artificial intelligence (AI) than the United States that would strengthen existing regulations on privacy and data rights, according to an 18-page proposal paper seen by Reuters. Part of this includes a moratorium of up to five years on using facial recognition technology in public areas, to give the EU time to work out how to prevent abuses, the paper said.

The European Union is considering new legally binding requirements for developers of artificial intelligence in an effort to ensure modern technology is developed and used in an ethical way. The EU's executive arm is set to propose the new rules apply to "high-risk sectors," such as health care and transport, and suggest the bloc updates safety and liability laws, according to a draft of a so-called "white paper" on artificial intelligence obtained by Bloomberg. The European Commission is due to unveil the paper in mid-February and the final version is likely to change. The paper is part of the EU's broader effort to catch up to the U.S. and China on advancements in AI, but in a way that promotes European values such as user privacy. While some critics have long argued that stringent data protection laws like the EU's could hinder innovation around AI, EU officials say harmonizing rules across the region will boost development.

Google's chief executive called Monday for a balanced approach to regulating artificial intelligence, telling a European audience that the technology brings benefits but also "negative consequences." Sundar Pichai's comments come as lawmakers and governments seriously consider putting limits on how artificial intelligence is used. "There is no question in my mind that artificial intelligence needs to be regulated. The question is how best to approach this," Pichai said, according to a transcript of his speech at a Brussel-based think tank. He noted that there's an important role for governments to play and that as the European Union and the U.S. start drawing up their own approaches to regulation, "international alignment" of any eventual rules will be critical.