How to use AI to reach human-level accuracy? Tourist reviews talk about their trip. And these reviewers choose & combine words to describe their experience in a way that must be understood within the framework of travel & tourism. It's a huge challenge to find all the nuances of a language. "好玩嘢" might be interpreted as'positive' by some Mandarin readers, but a Cantonese reader could see this as negative based on how it's used in the sentence.

The Future of Data Analytics - Compact

A global KPMG survey showed that organizations cannot yet reap all the benefits of data analytics due to data quality issues and a lack of capable resources. In 30 years' time, developments in data analytics itself could solve this issue, making many current professions in the sector obsolete. The impossible will become possible, and this may well lead to an autonomous decision-making process. Data analytics is expected to radically change the way we live and do business in the future. Already today we use the analytics in our technology devices, for many decisions in our lives.

The science of today will be the technology of tomorrow. With the same mindset, great passion, and enthusiasm towards technology I penned and tried to encapsulate the technology that shapes human life. I briefed up the introduction of machine learning, its applications with a bunch of methodologies and kept a full stop with a proper conclusion. Machine learning which is one of the finest technology which was been coined by Arthur Samuel of IBM who had developed a computer program for playing checkers in the 1950s. As the program had a very less amount of memory, Arthur initiated alpha-beta pruning.

How to Classify Documents With OCR and Machine Learning

Yeelen Knegtering, CEO & Co-founder of Klippa, is passionate about developing digital products that help people to save time on administrative hassle and spend time on the things they love. With a degree in Information Technology at the University of Groningen, he started Klippa with the idea that there had to be a better way to organize and manage receipts. Now, Klippa is a document digitization company with a focus on digitizing and automating document streams for companies.

Humans Can't Be the Sole Keepers of Scientific Knowledge

There's an old joke that physicists like to tell: Everything has already been discovered and reported in a Russian journal in the 1960s, we just don't know about it. The volume of knowledge is vast and growing quickly: The number of scientific articles posted on arXiv (the largest and most popular preprint server) in 2021 is expected to reach 190,000--and that's just a subset of the scientific literature produced this year. It's clear that we do not really know what we know, because nobody can read the entire literature even in their own narrow field (which includes, in addition to journal articles, PhD theses, lab notes, slides, white papers, technical notes, and reports). Indeed, it's entirely possible that in this mountain of papers, answers to many questions lie hidden, important discoveries have been overlooked or forgotten, and connections remain concealed. Artificial intelligence is one potential solution.

Oracle on Tuesday rolled out the latest version of Exadata, the platform for running Oracle database. The new Exadata X9M platforms are faster and more cost effective than previous generations. The Exadata platforms include versions for on-premise, in the Oracle public cloud and for Oracle's hybrid Cloud@customer offering. The ability to run the same platform in the cloud, on premise or in a hybrid environments sets it apart from the competition, Oracle says -- as does the fast online transaction processing (OLTP) it offers. With the X9M, "we keep doing what we're really good at," Juan Loaiza, Oracle's EVP of Mission-Critical Database Technologies, said to reporters.

Can We Solve Bias in AI?

This is a Women in AI Podcast transcript, for this interview we have Wendy Gonzalez, CEO at Sama, speaking with us about high-quality data training and what she's getting up to in her current role. We hope you enjoy the episode. Listen to the podcast here. So today I'm joined by Wendy Gonzalez on our Women in AI podcast episode, who is the Interim CEO of Sama, and I'm really excited to speak to her today. Hi, Wendy, how are you?

As more and more workforces adopt hybrid and work-from-anywhere models, using the right combination of technologies to create effective meetings can not only enhance productivity, but also promote well-being. Using a variety of tech solutions that improve scheduling and time management, communication, and collaboration is key to achieving positive work-life balance. In a world of constant technological innovation, it can be difficult to determine what's most helpful to supporting a workforce's performance. As we navigate new work models such as hybrid and work-from-anywhere, this technology must also factor in the importance of protecting employee personal time. Meetings can have a major impact on the length of a workday, which affects work-life balance. 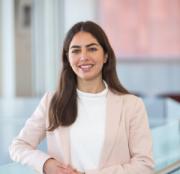 Breast cancer is the second most common cancer among women in the United States; as of January 2021, there are more than 3.8 million women with a history of breast cancer in the United States. Doctors often use ultrasound, mammograms, MRI, or biopsy to find or diagnose breast cancer. In a new study, researchers from NYU and NYU Abu Dhabi (NYUAD) report that they have developed a novel artificial intelligence (AI) system that achieves radiologist-level accuracy in identifying breast cancer in ultrasound images. Their findings are published in the journal Nature Communications, in a paper titled, "Artificial intelligence system reduces false-positive findings in the interpretation of breast ultrasound exams," and was led by Farah Shamout, PhD, NYUAD assistant professor emerging scholar of computer engineering and colleagues. "Though consistently shown to detect mammographically occult cancers, breast ultrasound has been noted to have high false-positive rates, the researchers wrote. "In this work, we present an AI system that achieves radiologist-level accuracy in identifying breast cancer in ultrasound images." "The AI system was developed and evaluated using the NYU Breast Ultrasound Dataset41 consisting of 5,442,907 images within 288,767 breast exams (including both screening and diagnostic exams) collected from 143,203 patients examined between 2012 and 2019 at NYU Langone Health in New York," noted the researchers. The primary goal of the AI system is to reduce the frequency of false-positive findings. It can detect cancer by assigning a probability for malignancy and highlight parts of ultrasound images that are associated with its predictions. When the researchers conducted a reader study to compare its diagnostic accuracy with board-certified breast radiologists, the system achieved higher accuracy than the ten radiologists on average. However, a hybrid model that aggregated the predictions of the AI system and radiologists achieved the best results in accurately detecting cancer in patients. "Our findings highlight the potential of AI to improve the accuracy, consistency, and efficiency of breast ultrasound diagnosis," explained Shamout. "Importantly, AI is not a replacement for the expertise of clinicians.

Move Over Turing and Lovelace – We Need a Terminator Test

What we really need is not a Turing test or a Lovelace test, but a Terminator test. If we create an all-powerful artificial intelligence, we cannot assume it will be friendly. We cannot guarantee anything about the AI's behavior due to something known as Rice's theorem. Rice's theorem states that all non-trivial semantic properties of programs are undecidable. Benevolence is certainly a non-trivial semantic property of programs, which means we cannot guarantee benevolent AIs.