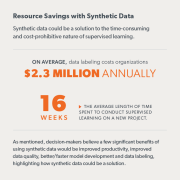 The Transform Technology Summits start October 13th with Low-Code/No Code: Enabling Enterprise Agility. Nearly nine in ten (89%) technology decision makers who use vision data agree synthetic data is a new and innovative technology and believe that organizations that fail to adopt synthetic data are at risk of falling behind the curve, according to new research by Synthesis AI in conjunction with Vanson Bourne. Technology leaders agree that synthetic data will be an essential enabling technology and key to staying ahead. Above: Synthetic Data could be a solution to the time consuming and cost prohibitive nature of supervised learning. AI is driven by the speed, diversity, and quality of data.

The Transform Technology Summits start October 13th with Low-Code/No Code: Enabling Enterprise Agility. Boston Dynamics has just released the latest update for its famous quadruped robot Spot, giving it better capability to make inspections and collect data without the need for human intervention. Called Spot Release 3.0, the new update adds "flexible autonomy and repeatable data capture, making Spot the data collection solution you need to make inspection rounds safer and more efficient." Unlike many other Boston Dynamics announcements, this one is not accompanied by a flashy video. But it could have a huge impact on Spot's position in the industrial mobile robot market, where it can reduce the costs of IoT instrumentation and the risks of exposing human operators to environmental hazards.

The presence of cancer of the lymphatic system is often determined by analyzing samples from the blood or bone marrow. A team led by Prof. Dr. Peter Krawitz from the University of Bonn had already shown in 2020 that artificial intelligence can help with the diagnosis of such lymphomas and leukemias. The technology fully utilizes the potential of all measurement values and increases the speed as well as the objectivity of the analyses compared to established processes. The method has now been further developed so that even smaller laboratories can benefit from this freely accessible machine learning method - an important step towards clinical practice. The study has now been published in the journal Patterns.

#189/200 These are 200 NFT's created by an artificial intelligence program stitching, mapping, and fusing different images from across the web together. 200 pieces will be created and live on the Ethereum blockchain

#163/200 These are 200 NFT's created by an artificial intelligence program stitching, mapping, and fusing different images from across the web together. 200 pieces will be created and live on the Ethereum blockchain

Can Artificial Intelligence Be Used in Casinos?

Casinos are not left out of the modern trends due to the new games and methods introduced into the gambling industry daily. For example, the Google Pay casinos top list is growing and developing rapidly. Considering the continuous advancement in technology, casinos' operations have also taken a major leap with the use of artificial intelligence. This new technology is known to have pervaded and influenced numerous areas of human life. Many companies and sectors now are trying to find out more about AI and ways it can be helpful in their day-to-day operations. 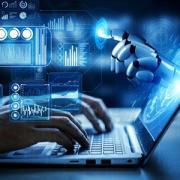 Every CISO's worst nightmare is that their organization will become the victim of a cyberattack. Unfortunately, this is a scenario that is becoming increasingly likely every day, as threats actors are ready to exploit new and more sophisticated vectors. For example, supply-chain-based attacks, such as the SolarWinds SUNBURST attack, are not simple system vulnerabilities. These attacks consist of a complex series of actions in which the initial infection is just the first step and are both more and more commonplace and difficult to prevent. This particular attack swept the globe since the campaign activation in March 2020, targeting the finance, government, healthcare, education and infrastructure verticals alike.

Right from image recognition to fraud detection, there are barely any ways left where the magic of machine Learning (ML) and artificial intelligence (AI) has not mesmerized us with. Together, both ML and AI have changed the way we interact with data and use it to enable massive digital growth. On that note, customers too have benefitted from its magic, in identifying data and then using that data to receive accurate outputs. Today, in this blog, we will walk you through the three types of machine learning. But before that, let us brush up on some of the basics.

Tesla is getting ready to roll out a software upgrade that will allow a select few drivers to use more autonomous driving features in cities. Up to now, the beta versions of driver assistance software made available to thousands of drivers in the US have been designed for the relatively more simple environment of highways. Computer-assisted urban driving would bring Tesla a step closer to CEO Elon Musk's vision of fully self-driving vehicles. But safety officials think the company is getting ahead of itself, and putting drivers at risk. "Basic safety issues have to be addressed before they're then expanding it to other city streets and other areas," Jennifer Homendy, chair of the National Transportation Safety Board, a federal agency that investigates transportation accidents, said in a Sept. 19 interview with The Wall Street Journal.

In instruction, two general methodologies lead understudies towards their schooling -- profound and surface learning. Man has five fundamental requests in their life. Training is one of them. Man can learn at whatever stage in life. All aspects of your life have numerous things to learn.