A court document petitioning to change the babies' last names to Musk revealed the births. Zilis is the director of operations and special projects at Musk's Neuralink startup. Prior to that, she served as a project director at Tesla. She gave birth to the twins just weeks prior to the arrival of Musk and Grimes' second child born via surrogate, Insider reported. International Business Times was not able to independently verify this report.

The man sat still in the chair, staring intently at a piece of cake on the table in front of him. Flanking him were two giant robotic arms, each larger than his entire upper body. One held a knife, the other a fork. Move right hand forward to start," ordered a robotic voice. The man concentrated on moving his partially-paralyzed right arm forward. His wrist barely twitched, but the robotic right hand smoothly sailed forward, positioning the tip of the fork near the cake. Another slight movement of his left hand sent the knife forward. Several commands later, the man happily opened his mouth and devoured the bite-sized treat, cut to personal preference with help from his robotic avatars. It had been roughly 30 years since he was able to feed himself. Most of us don't think twice about using our two arms simultaneously--eating with a knife and fork, opening a bottle, hugging a loved one, lounging on the couch operating a video game controller. Coordination comes naturally to our brains.

'Brain switch' stops us from running before the starting gun is fired, study finds

The 5th Multi-disciplinary Conference on Reinforcement Learning and Decision Making (RLDM) 2022 took place at Brown University from 8-11 June. The programme included invited and contributed talks, workshops, and poster sessions. The goal of RLDM is to provide a platform for communication among all researchers interested in learning and decision making over time to achieve a goal. Over the last few decades, reinforcement learning and decision making have been the focus of an incredible wealth of research spanning a wide variety of fields including psychology, artificial intelligence, machine learning, operations research, control theory, neuroscience, economics and ethology. The interdisciplinary sharing of ideas has been key to many developments in the field, and the meeting is characterized by the multidisciplinarity of the presenters and attendees. 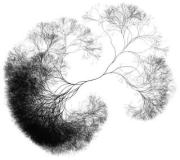 Artificial intelligence (AI) has been becoming a subject of many fields over time. Whether it will be capable of doing anything human beings can do or not is a big part of the arguments (Artificial General Intelligence -- AGI). On the other side, Artificial Narrow Intelligence (ANI) which comprehends some capabilities not only becomes more reliable in those capabilities but also expands its frame (i.e. Machine learning (ML) which is a vital tool for AI makes supervised learning possible. As a basic example, AI for self-driving cars needs huge data for better performance in determining which is a car and which is not, to keep optimum distance in traffic.

What Is It About the Human Brain That Makes Us Smarter Than Other Animals? New Research

Humans are unrivaled in the area of cognition. After all, no other species has sent probes to other planets, produced lifesaving vaccines, or created poetry. How information is processed in the human brain to make this possible is a question that has drawn endless fascination, yet no definitive answers. Our understanding of brain function has changed over the years. But current theoretical models describe the brain as a "distributed information-processing system."

Regular readers may have noticed that DSC Weekly didn't come out last week. The reason was personal – a close relative of mine had a series of strokes over the last couple of weeks, and I needed to take some time away to deal with the consequences. In addition, we migrated over to a new newsletter platform during this same period, which came with its own set of problems that we were eventually able to worth through. From the standpoint of someone working in the field of artificial cognition, strokes are fascinating. As someone watching a beloved relative deal with the aftermath of one, they are terrifying.

It's a truth universally acknowledged that "the algorithm" knows you better than you know yourself. A computer can supposedly predict whether you'll quit your job or break up with your partner. With 1,000 words of your writing, it can determine your age within four years. And no algorithm seems closer to omniscience than TikTok's, which is reportedly helping users discover their sexuality and unpack their childhood trauma. Whereas Facebook asks you to set up a profile, and hand over a treasure trove of personal information in the process, TikTok simply notices--or seems to.

Summary: Researchers developed a new GPU-based machine learning algorithm to help predict the connectivity of networks within the brain. A new GPU-based machine learning algorithm developed by researchers at the Indian Institute of Science (IISc) can help scientists better understand and predict connectivity between different regions of the brain. The algorithm, called Regularized, Accelerated, Linear Fascicle Evaluation, or ReAl-LiFE, can rapidly analyse the enormous amounts of data generated from diffusion Magnetic Resonance Imaging (dMRI) scans of the human brain. Using ReAL-LiFE, the team was able to evaluate dMRI data over 150 times faster than existing state-of-the-art algorithms. "Tasks that previously took hours to days can be completed within seconds to minutes," says Devarajan Sridharan, Associate Professor at the Centre for Neuroscience (CNS), IISc, and corresponding author of the study published in the journal Nature Computational Science.

Is your smartphone ruining your memory? A special report on the rise of 'digital amnesia'

Last week, I missed a real-life meeting because I hadn't set a reminder on my smartphone, leaving someone I'd never met before alone in a café. But on the same day, I remembered the name of the actor who played Will Smith's aunt in The Fresh Prince of Bel-Air in 1991 (Janet Hubert). Memory is weird, unpredictable and, neuroscientifically, not yet entirely understood. When memory lapses like mine happen (which they do, a lot), it feels both easy and logical to blame the technology we've so recently adopted. Does having more memory in our pockets mean there's less in our heads?