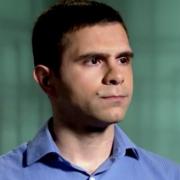 Entire fields that are "just" solving optimization problems sprinkled with randomness: - Machine Learning - Control Theory - Information Theory Optimization is becoming more important to engineering than PDEs have been for past 2 centuries.

NCRI - According to reports received from inside Iran, on the fifth of September 2016, Evin prison guards prevented political prisoner and supporter of the People's Mojahedin Organization of Iran (PMOI or MEK) Alireza Golipoor from going to the hospital only because he refused to wear prison uniform. Some news revealed that it has been over a month since this prisoner's medical care has been discontinued leading to the deterioration of his current physical condition. The reason for this suspension is his rejection to write a statement of repentance and regret. Political prisoner Alireza Golipoor was born on the eleventh of April 1986 in Tehran. He was studying PhD in telecommunications, was a senior employee in the Ministry of Communication and Information Technology and also a member of the National Association of Iranian Elite.

The stomach may have its own immune system that fights off foreign invaders that stay in our digestive system too long, a new invention helped scientists discover.

Airbnb's ambition to become your travel agent just got an Australian boost. On Tuesday, the company officially launched Trips in Sydney. First announced at the Airbnb Open conference in Los Angeles in late 2016, the new platform allows local "Experiences" to be offered to travellers as well as accommodation. SEE ALSO: Airbnb's on a problematic world tour to make your landlord like them In Sydney for the launch, Airbnb' vice president of product Joseph Zadeh said he'd had the chance to sample some of the local activities available. He tried a surf outing with big wave legend Mark Matthews, along with a behind-the-scenes dinner and show at the Sydney Opera House.

Film fans have inundated Ed Skrein with love after the British actor turned down the role of Major Ben Daimio in the new Hellboy film because the character is of mixed Asian heritage (and he isn't). Skrein's decision comes after years of controversy about Hollywood whitewashing. The rising star has been praised for his stance, especially since he's at a crucial point in his career, and won lots of new admirers. Respect to @edskrein for setting the example & reminding us progress requires sacrifice & representation is collective responsibility https://t.co/ExXDedgDFB As a person of Asian descent: thank you for this.