Singapore's Defence Science and Technology Agency (DSTA) has inked a partnership with Philadelphia-based Ghost Robotics to identify uses cases involving legged robots for security, defence, and humanitarian applications. They will look to test and develop mobile robotic systems, as well as the associated technology enablers, that can be deployed in challenging urban terrain and harsh environments. The collaboration also would see robots from Ghost Robotics paired with DSTA's robotics command, control, and communications (C3) system, the two partners said in a joint statement released Thursday. The Singapore government agency said its C3 capabilities were the "nerve centre" of military platforms and command centres, tapping data analytics, artificial intelligence, and computer vision technologies to facilitate "tighter coordination" and effectiveness during military and other contingency operations. Its robotics C3 system enabled simultaneous control and monitoring of multiple unmanned ground and air systems to deliver a holistic situation outline for coordinated missions, including surveillance in dense urban environments.

Germany, whose Nazi past makes military action a sensitive issue, has mainly carried out limited engagements abroad since World War Two, focusing on training, surveillance, medical rescue and peacekeeping, although it participated in the 1999 air offensive on what was then Yugoslavia.

SR-72 hypersonic bomber 'has already been made' 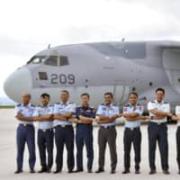 The Air Self-Defense Force said Friday it has deployed a new reconnaissance plane at its Iruma base in Saitama Prefecture on Thursday. "With the equipment for collecting radio wave information fully renewed, we can play an important role in the field of electromagnetic waves," ASDF Chief of Staff Shunji Izutsu told a news conference. According to the Defense Ministry, the RC-2 reconnaissance plane is an ASDF C-2 transport aircraft newly equipped with a radio wave measurement device developed by Toshiba Corp. The RC-2, which replaces the YS-11EB reconnaissance aircraft, can collect radio signals from wider areas and higher altitudes. A database of the frequencies of radio waves detected by reconnaissance aircraft would be useful in electronic warfare to disturb the communications and radar functions of enemies.