In An Apparent First, Police Used A Robot To Kill

After sniper fire struck 12 police officers at a rally in downtown Dallas, killing five, police cornered a single suspect in a parking garage. After a prolonged exchange of gunfire and a five-hour-long standoff, police made what experts say was an unprecedented decision: to send in a police robot, jury-rigged with a bomb. "We saw no other option but to use our bomb robot and place a device on its extension for it to detonate where the suspect was," Dallas Police Chief David Brown told a news conference Friday. "Other options would have exposed our officers to grave danger. The suspect is deceased as a result of detonating the bomb." 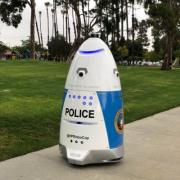 DALLAS/HOUSTON/LOS ANGELES/WASHINGTON – When Dallas police improvised a bomb-carrying robot to kill a sniper, they also kicked off an ethical debate about technology's use as a crime-fighting weapon. In what appears to be an unprecedented tactic, police rigged a bomb-disposal robot to kill an armed suspect in the fatal shootings of five officers in Dallas. While there doesn't appear to be any hard data on the subject, security experts and law enforcement officials said they couldn't recall another time when police deployed a robot with lethal intent. The strategy opens a new chapter in the escalating use of remote-controlled and semi-autonomous devices to fight crime and protect lives. It also raises new questions over when it's appropriate to dispatch a robot to kill dangerous suspects instead of continuing to negotiate their surrender.

Rio de Janeiro's police force, like the rest of the city's public services, is broke. In the headquarters of the bomb-disposal unit, supplies of everything from soap to explosives are running out as the city struggles to pay its debts amid Brazil's deep recession. But, poor as it is, Rio's bomb squad is one of the most technologically advanced in South America. In the cramped storeroom of its base in northern Rio, a state-of-the-art robot takes pride of place. "The robot is a fundamental piece of equipment--it's vital to our day-to-day work," says the bomb squad's boss, Marcelo Corrêa.