You have to build a system which should be consistent in nature. For example, if you are getting product feeds either through flat file or any event stream you have to make sure you don't lose any events related to product specially inventory and price. If we talk about price and availability it should always be consistent because there might be possibility that product is sold or seller doesn't want to sell it anymore or any other reason. However, attributes like Name, description doesn't make that much noise if not updated on time. John wants to build an e-commerce portal like Amazon, Flipkart or Paytm.

An introduction to Apache kafke, including what is kafka, kafka architecture, topics, partitions, a kafka tutorial, a kafka producer example, and a kafka consumer example 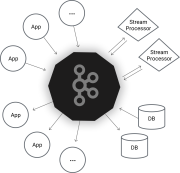 Kafka is a messaging system used for big data streaming and processing. In this tutorial, we discuss the basics of getting started with Kafka. We'll discuss the architecture behind Kafka and demonstrate how to get started publishing and consuming basic messages. Kafka is a messaging system. It safely moves data from system A to system B. Kafka runs on a shared cluster of servers making it a highly available and fault-tolerant platform for data streaming.

This Slack Team will focus on the Apache Kafka technology and its ecosystem, also allowing its members to interact and share their use cases, do and don't, how to's, etc. We will also hear about the Confluent Platform and topics like Kafka's Connect API and streaming data pipelines, Kafka's Streams API and stream processing, Security, Microservices and anything else related to Apache Kafka.

As you can see, 1.0.0 is a significant release with real enhancements, but the number matters too. Now, to call Kafka broadly deployed would be an understatement: it is nearly everywhere we find streaming data. After becoming the de facto standard distributed messaging platform on the planet, the project continued to mature into a world-class streaming data platform with capabilities like Connect, Streams, and exactly once processing--all the while maintaining humble 0.x version numbers. I am very excited for the progress we have made so far and I'm looking forward to the next seven years of what the Apache Kafka community, my fellow committers, and the ever-growing list of Kafka fans and users can do with this platform, and I am humbled to be a part of the process.