The skyline in Sydney has become the stage for an impressive drone show. As the city's rainy weather finally subsided, Intel kicked off its show with 100 illuminated drones taking to the sky above Sydney Harbour on Wednesday night. The display will take place across five nights as part of Sydney's Vivid Festival, with Sydney's Youth Orchestra performing Beethoven's Fifth Symphony as the soundtrack. This isn't the first time such a performance has taken place. The inaugural Intel drone event, which broke a Guinness World Record for the most UAVs flying simultaneously, happened in Hamburg, Germany, in 2015.

Swarms of smart drones to revolutionise how we watch sports

Anyone who has watched coverage of a festival or sports event in the last few years will probably have witnessed commercial drone use -- in the form of breathtaking aerial footage. But a collaboration of universities, research institutes and broadcasters is looking to take this to the next level by using a small swarm of intelligent drones. The EU-funded MULTIDRONE project seeks to create teams of three to five semi-automated drones that can react to and capture unfolding action at large-scale sports events. Project coordinator Professor Ioannis Pitas, of the University of Bristol, UK, says the collaboration aims to have prototypes ready for testing by its media partners Deutsche Welle and Rai – Radiotelevisione Italiana within 18 months. 'Deutsche Welle has two potential uses lined up – filming the Rund um Wannsee boat race in Berlin, Germany, and also filming football matches with drones instead of normal cameras – while Rai is interested in covering cycling races,' said Prof. Pitas.

While it's not clear that Porsche is ready to confirm the details, it's clearly open to the idea. Company sales lead Detlev von Platen noted that it takes him "at least half an hour" just to drive from Porsche's plant in Zuffenhausen to the airport in Stuttgart, but just "three and a half minutes" with an aircraft.

It's easy to think that once cars start driving themselves most of our traffic woes will be eliminated. Robocars are supposed to be better drivers and better driving should mean less gridlock. Unfortunately, that drop in bumper to bumper hell won't be as big as we all hoped, according to Audi's research. At Audi's Charged event (where it will unveil the E-Tron), the automaker gave Engadget a sneak peek at its latest 25th Hour Flow research. The company (along with Karlsruhe Institute for Technology and Munich's MobilityPartners) peered into the future to see how drivers and passengers can reclaim time thanks to autonomous driving and mobility options.

Shake and brake: your autonomous car wants your attention 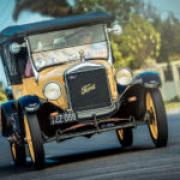 There's a grey period that autonomous car developers don't often discuss between humans controlling cars and AI controlling cars, where humans in autonomous cars will need to stay on high alert to avoid accidents with terrible human drivers. Some suggestions have been put forward on how to tackle this intersection, like using visual or aural alerts. The Tesla Model S, which provides a highway self-driving system, alerts the driver through a series of beeps, warning them to take control of the car. However, according to the Technische Universität München in Munich, Germany, all of the current alerts systems are ineffective. A team of researchers said to Spectrum IEEE that vibrotactile display alerts are by far the best way to get the driver's attention, because they are hard to ignore.