For example, natural language processing should be introduced via human psycholinguistics, or via discussions of the social implications of conversational machines, rather than via engineering concerns about parsing systems.

The history of science and technology is often delineated by paradigm shifts. A paradigm shift is a fundamental change in how we view the world and our relationship to it. The big paradigm shifts are sometimes even referred to as an "age" or a "revolution". The Space Age is a perfect example. The middle of the 20th Century saw not only an incredible increase in public awareness of space and space travel, but many of the industrial and technical advances that we now take for granted were byproducts of the Space Age. 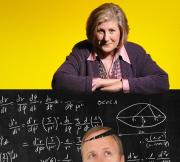 This ScienceLives article was provided to LiveScience in partnership with the National Science Foundation. Nancy J. Nersessian's research is driven by the question "How do scientists think?" Nersessian's research focuses on how the cognitive and learning practices of scientists and engineers lead to creative and innovative outcomes. She is a Regents' Professor of Cognitive Science at the Georgia Institute of Technology with joint appointments in the Ivan Allen College of Liberal Arts School of Public Policy and the College of Computing School of Interactive Computing. Her research supports the insight that scientists think not only with ideas, but also with the artifacts they create to investigate nature.

AIC 2016 is the fourth international appointment of the International Workshop Series AIC on "Artificial Intelligence and Cognition". The AIC series started in 2013, stemming from the need of creating an international scientific forum for the discussion and the presentation of the theoretical and applied research developments in the field of cognitively inspired Artificial Intelligence. In recent years, after a period of partial fragmentation of the research directions between the AI and Cognitive Science community, the area of cognitively inspired artificial systems has attracted a renewed attention both from academia and industry and the awareness about the need for additional research in this interdisciplinary field is gaining again widespread acceptance. In this spirit, the AIC 2016 workshop aims at putting together researchers coming from different domains (e.g., artificial intelligence, cognitive science, computer science, engineering, philosophy, social sciences, etc.) working on the interdisciplinary field of cognitively inspired artificial systems. AIC 2016 will be an official workshop of the BICA 2016, 7th Conference on Biologically Inspired Cognitive Architectures and will be one of the international events that will take place in July in New York under the HLAI framework, a joint effort between the major Artificial Intelligence conferences and academic events explicitly targeting work towards the computational creation of human-level Artificial Intelligence.

Cognitive psychology and artificial intelligence have provided valuable insights into the scope and limitations of understanding human thought and behavior. Advances in computer technology and tools are becoming more of a fixture in everyday life, and increasingly affecting how we think about artificial intelligence and cognition. This special track is motivated by these two fronts of research.