NBA basketball teams will be able to sell advertising space on their playing jerseys for the first time starting from the 2017-18 season. The NBA said teams in the league, encompassing the biggest basketball clubs in North America, could place a 2.5in (6.3cm) square sponsor's logo. Teams until now have been unable to exploit this lucrative commercial option enjoyed by many other sports. Experts predict the deals will generate more than 4m ( 2.8m) a year for clubs. The NBA, which is the first major North American sports league to announce plans to put ads on jerseys, said a small patch would appear on the front left of match jerseys as part of a three-year pilot programme.

Tim Harris will be honest with you. Like many who heard the news on Thursday, the Lakers chief operating officer hadn't heard of Wish either -- until the company approached the team about a sponsorship deal. Harris said Wish, a San Francisco-based mobile shopping app, reached out to the Lakers, then he did some research before flying to San Francisco for a meeting with Peter Szulczewski, the company's CEO. Not long afterward, they struck a deal. For the first time in the franchise's history, the Lakers will have advertising on their jerseys as part of the NBA's new sponsorship deal. 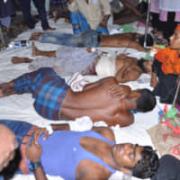 LONDON – Visitors to a London portrait gallery were treated to an impromptu performance on Sunday when three semi-naked climate activists were doused with mock crude oil in a protest against arts sponsorship by British oil company BP. The unauthorized stunt at the National Portrait Gallery capped a two-week wave of actions by civil disobedience movement Extinction Rebellion, which led to more than 3,300 arrests in London and cities around the world, the group said. Activists spread a white sheet over the floor of the main hall of the gallery's Ondaatje wing before two women and a man wearing only skin-colored underwear adopted fetal positions on the covering. Protesters then slowly doused the prone performers with washable black liquid as activist Eden Rickson read a poem asking the gallery to stop accepting sponsorship money from BP. "We cannot be artists on a dead planet. "With compassion, we ask you to change.

Toshiba Corp., reeling from massive losses from the bankruptcy of its U.S. nuclear unit, is considering quitting as sponsor for the popular cartoon show "Sazae-san" after 48 years, sources said Tuesday. Airing on Sunday evenings since October 1969, the cartoon has been recognized by Guinness World Records as the longest-running animated series in the world. Toshiba began sponsoring the weekly program to advertise its white goods home appliances, but its unit for making such products has already been sold off. Fuji Media Holdings Inc., which runs the show on its national channel, will look to have a new sponsor in place as early as next March, the sources said.

Tourney wouldn't be complete without a ton of perks. Great we have a tier system to reward you. Want to run a league in your server? Bingo, we have that too! The more tournaments you run with Tourney, the more perks you unlock.