Matthew Keys, a journalist found guilty of conspiring with hacking group Anonymous to break into the Los Angeles Times website, was sentenced to two years in prison on Wednesday in a case that has sparked national debate about how the US prosecutes hacking offenses. Keys, who was found guilty of three criminal counts in October, was convicted of giving Anonymous login credentials to the computer system of the Tribune Company, which owns the Los Angeles Times, the Chicago Tribune, the Baltimore Sun and other media companies. Prosecutors alleged that a hacker used information Keys provided to change the headline of a 2010 Times story. KTXL-TV, a Tribune-owned Fox affiliate in Sacramento, had previously fired Keys, and the US attorney's office asserted that the incident was payback by a disgruntled former employee. Soon after a judge announced the sentence in federal court in Sacramento on Wednesday, Keys, who has a large social media following, tweeted that he was pushing forward with an appeal, adding: "[W]e're not only going to work to reverse the conviction but try to change this absurd computer law, as best we can."

LAS VEGAS – A Las Vegas jury on Monday found a former mixed martial arts fighter known as War Machine guilty of kidnapping and sexually assaulting his porn actress ex-girlfriend. Jurors deadlocked Monday on two attempted-murder charges against Jonathan Paul Koppenhaver but convicted him of a total of 29 counts. He could face up to life in prison. Koppenhaver, 35, went by his birth name during the two-week trial but had legally changed it to War Machine during his 19-fight MMA career. Defense attorney Jay Leiderman this week conceded Koppenhaver's guilt on eight lesser domestic battery charges, including punching and injuring ex-girlfriend Christy Mack.

LAS VEGAS – The former mixed martial arts fighter known as War Machine was found guilty Monday of kidnapping, beating and sexually assaulting his porn actress ex-girlfriend over several months in 2014, and of beating her male friend when he found them together in her bedroom. Nevada jurors deadlocked on two attempted-murder counts against Jonathan Paul Koppenhaver but convicted him of 29 felonies stemming from attacks on Christy Mack and Corey Thomas. The Associated Press normally does not identify people who say they are victims of sexual assault, but Mack gave AP permission to use her name. Neither she nor Thomas was in the courtroom while Koppenhaver, 35, stood flanked by his lawyers. He folded his arms across his chest as the verdicts were read.

Journalist to be sentenced in LA Times hacking case

A well-known social media journalist is set for sentencing Wednesday after he was convicted of conspiring with the hacking group Anonymous to break into the Los Angeles Times' website and alter a story. Federal prosecutors in Sacramento say despite his role in the news media, 29-year-old Matthew Keys of Vacaville, California, was simply a disgruntled employee striking back at his former employer. He was convicted of providing login credentials to The Tribune Co.'s computer system. The company owns the Los Angeles Times and FOX affiliate KTXL-TV in Sacramento, where Keys worked until he was fired two months before the 2010 hacking. When charges were filed in 2013, he was fired from his then-employer, the Reuters news agency. 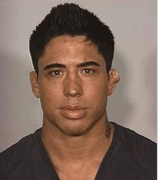 Former Mixed Martial Arts (MMA) fighter, Jonathan Paul Koppenhaver popularly known as "War Machine" was found guilty Monday of 29 out of 34 possible charges against him including kidnapping, coercing witnesses, sexual assault and domestic violence. Koppenhaver was on a two-week trial for sexually assaulting his ex-girlfriend Christine Mackinday known as Christy Mack and beating her male friend back in August 2014. The Las Vegas jury handed down the verdict and filed two attempted-murder charges against Koppenhaver and according to the prosecutor, Clark County Chief Deputy District Attorney, Jacqueline Bluth he could face life imprisonment, CNN reported. The brutal sexual assault in August 2014 left Mack with several serious injuries including 10 broken bones, missing teeth, a broken nose, a punctured lung, a fractured rib and a severely ruptured liver. Corey Thomas, her male friend was also injured with a bone fracture and several contusions.