'Pokémon Legends: Arceus' is coming to Switch on January 28th

The Pokémon Company (TPC) has revealed exactly when you'll be able to get your hands on Pokémon Legends: Arceus and the remakes of Nintendo DS classics Pokémon Diamond and Pokémon Pearl. The former will hit Nintendo Switch on January 28th, while Pokémon Brilliant Diamond and Pokémon Shining Pearl will arrive on the console two months earlier, on November 19th. Pre-orders are open for all three. Pokémon Legends: Arceus is set in the Sinnoh region, like Brilliant Diamond and Shining Pearl. It's an action RPG that takes place "long before" the events of those games.

Pre-order the new Split Pad Pro for Nintendo Switch, which is inspired by 'Pokémon Legends: Arceus' 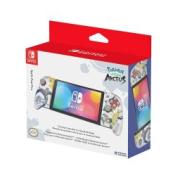 PREORDER: A new Pokémon Legends: Arceus-themed Hori Split Pad Pro controller is set for release on Feb. 28. You can reserve one ahead of time at Amazon or Best Buy for $59.99. Imagine you're about to finally catch a wild Alpha Rapidash several hours into Pokémon Legends: Arceus when suddenly your hands cramp up. The red-eyed equine spots you before you can sneak away and smacks the absolute crap out of you and your level 5 Rowlet, sending you to the dreaded "Everything went black!" screen. It's a tale as old as the Hisui region: The Joy-Cons that come with the Nintendo Switch are incredibly awkward and uncomfortable to hold for long periods of time.

Pokémon Legends: Arceus is the future of the series

Is Pokémon Legends: Arceus a mainline Pokémon game? Since the ambitious Nintendo Switch game's reveal in February 2021, this has been a highly contested question. On the one hand, it's radically different from how older Pokémon games are structured and played. Game Freak and the Pokémon community need to decide whether it's a glorified spin-off that tests new ideas or the next step for the series' future. Game Freak has lots of room to grow and expand Pokémon Legends: Arceus' mechanics.

'Pokémon Scarlet' and 'Pokémon Violet' are both available for preorder

PREORDER: Pokémon Scarlet and Pokémon Violet are launching for the Nintendo Switch in late 2022. You can reserve copies from Amazon or Walmart for $59.99 or $59.88 each (respectively) as of March 3. Announced over the weekend on Pokémon Day, the anniversary of the franchise's inception, Pokémon Scarlet and Pokémon Violet are a pair of new RPGs that are coming to the Nintendo Switch sometime in late 2022. Both titles were available for preorder at the time of writing -- you can grab copies on Amazon for $59.99 apiece, or head to Walmart to reserve yours for $59.88 each. The Pokémon Company says its series "takes a new evolutionary step" in these upcoming titles, which will "[allow] you to explore freely in a richly expressed open world." You'll play as two new main characters, each with their own new outfits, as you wander their vast wildernesses and battle wild Pokémon.

Where to pre-order the new Pokémon Funko Pop figurines

PRE-ORDER: Three new Pokémon Funko Pop figurines are available for preorder as of Feb. 2. You can purchase each one separately on Amazon for $11.99 or grab the entire trio (plus a shell case) at Walmart for $36 ahead of their release on March 15. Funko Pop's Pokédex is about to grow by three. The collectible company announced the ninth wave of its Pop! Games: Pokémon series this week, a trio of vinyl figurines inspired by pocket monsters Sylveon (a Fairy-type evolution of Eevee), Lucario (a Fighting/Steel type that can read auras), and Alakazam (a first-generation Psychic type). Their March 15 release date is still a few weeks out, which means you still have plenty of time to get a preorder in. You can reserve your favorite(s) from Amazon for $11.99 apiece or bundle all three through Walmart for $36.