JAKARTA: Indonesian President Joko Widodo on Thursday (Nov 28) ordered government agencies to remove two ranks of public servants in 2020 and replace their roles with artificial intelligence, in a bid to cut red tape hampering investment. Widodo made the remarks in a room full of leaders of big companies as he laid out a second-term agenda aimed at changing the structure of Southeast Asia's largest economy by reducing its reliance on natural resources. The president, whose new five-year term began last month after winning an election in April, said Indonesia should transition to higher-end manufacturing, such as electric vehicles and use raw materials like coal and bauxite in such industries, not just exports. Such transformation would require foreign investment and Widodo said he would improve the business climate by fixing dozens of overlapping rules and cutting red tape. To reduce bureaucracy, Widodo said the current top four tiers in government agencies would be flattened to two next year.

In a surprise announcement, Indonesia's president Joko Widodo has ordered government agencies to replace top civil servants with artificial intelligence (AI) during 2020. The president announced the decision to a room of business leaders as he set out plans for his second five-year term after winning an election in April, Reuters reported. Widodo said that the top four tiers of civil servants would be condensed into two. "I have ordered my minister [of administrative and bureaucratic reform] to replace them with AI. Our bureaucracy will be faster with AI," he said. 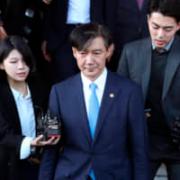 JAKARTA – Indonesian President Joko Widodo is due to unveil his cabinet Monday after pledging to put the world's fourth most populous country on a path to become a $7 trillion economy by 2045. The president, who was sworn in for a second and final five-year term in office on Sunday, is widely expected to revamp his cabinet to include professionals, key opposition figures and industrialists, and to reboot his economic team as he seeks to boost investment and growth amid a global slowdown. Widodo, 58, took the oath of office at the parliament hall in Jakarta in a ceremony attended by several heads of state and representatives from more than 150 countries. Known colloquially as Jokowi, he immediately urged lawmakers to overhaul a myriad of laws hindering investment and job creation to rid the country of poverty. By the time Southeast Asia's largest economy marks a century of its independence in 2045, he aims to have lifted the per-capita income to 320 million rupiah ($22,656).

Joko Widodo, commonly known as Jokowi, was elected president of Indonesia, one of Asia's leading economies - and the country with the largest Muslim population in the world - in October 2014. He rose to power promising to be "the people's president" and with an initial approval rating of 70 percent, expectations were high. His dreams of further improving the country's economy - especially for the poor - and to fight corruption and bureaucracy, however, were very ambitious. He promised to transform Indonesia's infrastructure to interconnect its most remote regions, a project at an estimated cost of over $1 trillion. But only in 2015, Indonesia's economy, South Asia's largest, was growing at its lowest rate in six years.

Indonesian President Joko Widodo says he's determined to "prevent the growth of radicalism" after reports that Muslim conservatives are planning protests to destabilise his government. Officials say there has been mounting alarm in the government since more than 100,000 people - led by a group called the Islamic Defenders Front - took to the streets of Jakarta on November 4 to demand the removal of the capital's governor - a Christian - for alleged blasphemy. Widodo blamed "political actors" for fanning violence during the massive protest, without naming anyone. The president held talks with a senior coalition partner on Tuesday, the latest in a series of meetings with top political, religious, and military officials to signal the unity of his government and support from the security establishment. "I want to emphasise the spirit of pluralism," Widodo told reporters after the meeting at the presidential palace.