Self-driving car pioneer Sebastian Thrun has shifted his gaze to the skies, as his Silicon Valley online school Udacity launches what it calls the first'nanodegree' in flying car engineering.

Night driving in an autonomous vehicle designed by Udacity, an online training service that specializes in high-tech vocations. Sebastian Thrun, the original leader of Google's self-driving car project, is going to help rideshare company Lyft staff up its autonomous vehicle team with training through Udacity, his high-tech vocational service. And if robot cars weren't enough, he's creating the first academic program for those wanting to design so-called flying cars. Lyft will sponsor 400 scholarships over the next year for qualified candidates to complete Udacity's online self-driving car "nanodegree" program, which certifies them to work with companies struggling to find engineering talent in that field. Along with finding people for its new Level 5 Engineering Center, Lyft wants the scholarships help attract a more diverse range of people to work on autonomous vehicles, said Chief Strategy Officer Raj Kapoor.

The online education company Udacity on Tuesday unveiled a "flying car" nanodegree program, offering students "the skills to create autonomous flight vehicles that will be crucial to the transportation systems of the future." Driven to distraction: Why IBM's Watson is getting onboard with self-driving vehicles and impatient passengers IBM has teamed up with Local Motors for a new autonomous vehicle. Here's how it will handle difficult passengers - and why you won't be able to buy one. The two-term program will open in early 2018, with a curriculum designed by aerospace and autonomous systems experts, including Nicholas Roy, the MIT Aeronautics professor and founder of Alphabet's Project Wing; Raffaelo D'Andrea, ETH Zurich professor and co-founder of Kiva Systems; Angela Schoellig, University of Toronto Institute Aerospace professor; and Udacity founder Sebastian Thrun. "Our goal is to teach a new generation of engineers the skills necessary to build this smart transportation future," Roy wrote in a blog post. 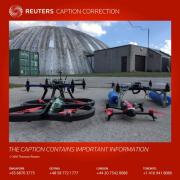 With companies from Airbus and Amazon to Uber throttling up development of their own autonomous aerial vehicles, Thrun believes "in a few years time, this will be the hottest topic on the planet." As usual, Thrun intends to be on the cutting edge of this emerging technology. The 50-year-old PhD computer scientist and former Stanford University professor, co-founded Udacity in 2012 and says the online school's self-driving car program has attracted 50,000 applicants since 2016. He expects the new flying car curriculum, which opens in late February and begins taking applications on Tuesday, to draw at least 10,000. Udacity is offering two 12-week terms, at $1,200 each, including a course in Aerial Robotics and one in Intelligent Air Systems, that provide an online certification in a fraction of the time of a traditional degree course.