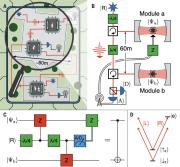 The processing of quantum information is reliant on the encoding and manipulation of quantum states of a qubit. Superconducting circuits are the most advanced platform at present, but there is an issue with cross-talk between the qubits and the challenge of error correction as the systems are scaled up. Another approach being pursued is a modular platform in which the qubits are spatially separated. Daiss et al. demonstrate the operation of a quantum gate in which one qubit conditionally controls the state of another qubit spatially separated by 60 meters (see the Perspective by Hunger). Because the approach is platform independent, it could be extended from the demonstrated neutral atoms to ions, impurity vacancy centers, or even a combination of these qubits. Science , this issue p. [614][1]; see also p. [576][2] The big challenge in quantum computing is to realize scalable multi-qubit systems with cross-talk–free addressability and efficient coupling of arbitrarily selected qubits. Quantum networks promise a solution by integrating smaller qubit modules to a larger computing cluster. Such a distributed architecture, however, requires the capability to execute quantum-logic gates between distant qubits. Here we experimentally realize such a gate over a distance of 60 meters. We employ an ancillary photon that we successively reflect from two remote qubit modules, followed by a heralding photon detection, which triggers a final qubit rotation. We use the gate for remote entanglement creation of all four Bell states. Our nonlocal quantum-logic gate could be extended both to multiple qubits and many modules for a tailor-made multi-qubit computing register. [1]: /lookup/doi/10.1126/science.abe3150 [2]: /lookup/doi/10.1126/science.abg1536

The deployment of quantum technologies will be reliant on developing platforms that are mass-manufacturable and cost-effective. Quantum key distribution is a protocol that ensures secure communications between various parties within a network using shared secret keys to encrypt the communication channels. However, practical implementations with hybrid systems can leave side channels open, which compromises the security of the network. Semenenko et al. demonstrate a quantum-ready platform based on all the optical components being monolithically integrated on an indium-phosphide photonic chip. With the side channels to information leakage effectively closed and demonstrated secret keys exchanged at rates exceeding 1 kilobit per second over 100 kilometers, such a platform provides a promising solution for the development of secure communication over citywide quantum networks.

Quantum computing's potential to revolutionize AI depends on growth of a developer ecosystem in which suitable tools, skills, and platforms are in abundance. These milestones are all still at least a few years in the future. What follows is an analysis of the quantum AI industry's maturity at the present time. Quantum AI executes ML (machine learning), DL (deep learning), and other data-driven AI algorithms reasonably well. As an approach, quantum AI has moved well beyond the proof-of-concept stage.

Oxford Quantum Circuits (OQC), which unveiled the UK's most advanced superconducting quantum computer in 2018, has launched the UK's first Quantum Computing-as-a-Service (QCaaS) platform. In a boost for the UK's ambitions to be a global quantum superpower, as well as for businesses looking to explore the increasing commercial and technical benefits of quantum computing, today's announcement is the latest in a series of firsts for the company. Having built and launched the UK's first superconducting quantum computer in 2018, today's announcement marks the first time OQC's proprietary technology is available to the enterprise via its private cloud. This announcement supports the startup's goal of pioneering the Quantum Computing-as-a-Service (QCaaS) market. Dr Ilana Wisby, the CEO of OQC, said: "The launch of our QCaaS platform is not only a remarkable achievement in the history of Oxford Quantum Circuits, but is a significant milestone in unlocking the potential of quantum computing both in the UK and globally. "We know quantum computing has the power to be revolutionary but for decades this power and potential has been relatively untested and unverified in the real world.