Artificial intelligence is already better than humans at video games, quiz shows and an ancient Chinese board game. Next up, the bots are coming for Jenga. In a newly-published paper, scientists from MIT describe how they taught a robot real-world physics and a practical sense of touch by unleashing it on the tricky tower-building game. Because unlike purely cognitive games that rely on visual cues, such as chess or Go, Jenga "requires mastery of physical skills such as probing, pushing, pulling, placing and aligning pieces," claims MIT's Prof Alberto Rodriguez. The robot (equipped with force sensors and cameras) immediately began prodding and poking the Jenga blocks using its two-pronged arm. 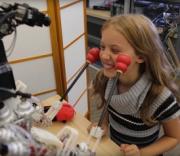 The robot is animated by hydrostatic transmission--a method of pressurizing and releasing a custom water/air mix in hydraulic tubes--which makes the robot's limbs move. The operator wears a control mechanism that mirrors the robot's structure, so as the human moves, so does the robot. Haptic feedback is built into the human operator's hand controls to provide tactile feedback whenever the robot's hand makes contact with objects (or kids). The robot also has a stereo camera instead of eyes, allowing the human to use telepresence to see what the robot "sees."

Artificial intelligence research organization OpenAI has achieved a new milestone in its quest to build general purpose, self-learning robots. The group's robotics division says Dactyl, its humanoid robotic hand first developed last year, has learned to solve a Rubik's cube one-handed. OpenAI sees the feat as a leap forward both for the dexterity of robotic appendages and its own AI software, which allows Dactyl to learn new tasks using virtual simulations before it is presented with a real, physical challenge to overcome. In a demonstration video showcasing Dactyl's new talent, we can see the robotic hand fumble its way toward a complete cube solve with clumsy yet accurate maneuvers. It takes many minutes, but Dactyl is eventually able to solve the puzzle.

As pretty much the living embodiment of dinosaurs (seriously, check out those legs!), ostriches are pretty awesome. This ostrich-inspired robo mechanism created by researchers at the Florida Institute for Human and Machine Cognition is pretty darn cool in its own way, too -- thanks to its minimalist running mechanism.

Meg Whitman, the CEO of IBM's biggest all-around competitor, Hewlett-Packard Enterprise, isn't impressed with IBM's super-smart, talking computer Watson. When asked by Network World's John Gallant why Whitman wasn't out talking up HPE's own "cognitive" services, she said (emphasis ours): Listen, they're [IBM] doing some very interesting things. They're buying healthcare companies and stuff, but listen, our Vertica platform is remarkable as is our Haven OnDemand platform. I put us up against Watson every day of the week here. We're in a lot of customers where actually from a Watson perspective it's not as far along in terms of real-world applications as you might imagine from the advertising.