California fashion-tech entrepreneur Leanne Luce joined the cryptocurrency community this year and immediately noticed there weren't stylish options for keeping her cryptocurrency wallet nearby. So she launched the crypto-first lifestyle brand, Omura, with a wearable Ledger Nano S hardware wallet. These necklaces run from $80 for the standard wearable to $3,500 for the 14K gold pendant.

Is Blockchain Technology Set to Revolutionize the Fashion Industry?

According to a report from PwC, artificial intelligence, augmented reality, blockchain, drones, internet of things, robots, virtual reality and 3D printing are the eight emerging technologies that today's businesses need to familiarize themselves with. Of the eight, there is one technology that has many fashion insiders furrowing their brows in a vain attempt to understand it, and that technology is blockchain. Devised in 2008 and executed in 2009, blockchain is a term that falls fast from the lips of many who still misunderstand it. For those who are yet to become intimate with the term, the first thing you should know is that blockchain is the primary technology behind the tech buzzword of 2013, bitcoin. Defined by Blockchaintechnologies.com as a type of distributed ledger, comprised of unchangable, digitally recorded data in packages called blocks, they explain blockchain further by stating that, "These digitally recorded'blocks' of data are stored in a linear chain.

Blockchain technology has been around for a while now, but even if the technology is at its infancy, various projects have been experimenting with using it to offer solutions in all kinds of industries. Fashion is no exception to this rule. In particular, some projects have been underway to try and find ways in which blockchain could be used to support ethical fashion. With more consumers from younger generations stating that they want products that are more sustainable and produced ethically, this has been one driver that has caused the industry to sit up and take notice. This has led to various ideas that have emerged about how blockchain could bring benefits to the fashion industry to make it more ethical. 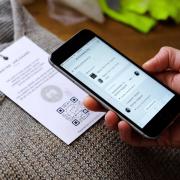 Blockchain technology was first released to the public almost a decade ago, but it's only entered the public consciousness in earnest within the last year or so. With that heightened awareness has come an increased dialogue about blockchain's applications in the fashion industry, and the ethical fashion community in particular has taken notice. Everyone from sustainability podcaster Kestrel Jenkins to the Business of Fashion have delved into what the emerging technology could offer fair fashion advocates. And yet, if you ask the average fashion person -- even a smart, well-read, ethics-concerned one! With that in mind, we decided to dive in, talk to some experts and see if we could reduce blockchain, and the opportunity it offers in the realm of ethical fashion, to the most understandable terms possible.

London-based, Czech designer Martina Spetlova has become the first clothing label to integrate Provenance's blockchain technology platform across her collection. Spetlova insists "it's more about stories", cutting through the technical jargon and focusing on the benefit to consumers. Provenance was set up by tech designer and engineer Jessi Baker in 2013 to build a trusted system to make supply chains more transparent. To date they've helped thousands of food brands gain the trust of consumers by allowing them to see where their purchase has come from. Now, since conducting a pilot case study with knitwear label Martine Jarlgaard, they are tackling fashion labels too.