Regional inequality in the UK is becoming more pronounced, Bank of England chief economist Andrew Haldane has warned. London and the South East are the only places in the UK where income per head is back above pre-financial crisis levels, he said. Net wealth has also fallen in places such as the north-east of England. But without action by the Bank, the regions could have faced economic contraction, he added. "The UK, I think, is towards the bottom of the league table within Europe in terms of its degree of difference across regions," Mr Haldane told the BBC economics editor Kamal Ahmed.

Are new types of matter on the horizon? Researchers reveal how Nobel Prize could boost research

The 2016 Nobel Prize in physics has been awarded to David Thouless, Duncan Haldane and Michael Kosterlitz, three theoretical physicists whose research used the unexpected mathematical lens of topology to investigate phases of matter and the transitions between them. Topology is a branch of mathematics that deals with understanding shapes of objects; it's interested in'invariants' that don't change when a shape is deformed, like the number of holes an object has. Physics is the study of matter and its properties. The Nobel Prize winners were the first to make the connection between these two worlds. The Nobel Prize for Physics has been awarded to three Brits for their research into'exotic matter'.

How to Outrun a Dinosaur

If a mouse fell down a 1,000-foot mine shaft, the renowned evolutionary biologist JBS Haldane once proposed, the mouse would rise, shake the dust off itself, and scurry away. Maybe even right back up to do it again. If a rat fell from the same height, however, it would die. A human would break, Haldane writes, and a horse would splash. Haldane does not provide a colorful verb in his 1926 essay On Being the Right Size for what would occur if a 9-ton Tyrannosaurus rex fell into that mine.

Named SALTO and developed in California, the machine stands just about 10 inches tall, but can jump straight up from a crouch to over three feet high. Not only that, the robotic critter-- made with an eye towards someday helping with search and rescue operations-- can execute a parkour-like move and jump off the ground, then off a wall. Duncan Haldane, first author on a study about the new robot and a PhD candidate at University of California, Berkeley, said his team was inspired to make SALTO after talking with first responders at an urban rescue training site. "Our goal was to have a search and rescue robot small enough to not disturb the rubble further, [and] move quickly across the many kinds of rubble produced by collapsed buildings," he said during a teleconference on Monday. "To do that, it has to be able to jump." 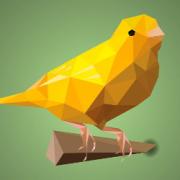 In 1913, Scottish physiologist John Scott Haldane proposed the idea of bringing a caged canary into a mine to detect dangerous gases. More than 100 years later, Haldane's canary-in-the-coal-mine approach is also applied in software testing. In this article, the term canarying refers to a partial and time-limited deployment of a change in a service, followed by an evaluation of whether the service change is safe. The production change process may then roll forward, roll back, alert a human, or do something else. Effective canarying involves many decisions--for example, how to deploy the partial service change or choose meaningful metrics--and deserves a separate discussion.