Trump throws Canada under the bus

The odd thing is I can't seem to find the specific locale in the Stygian depths for Justin Trudeau, the Canadian prime minister. And yet, White House trade advisor and apparent theologian Peter Navarro said on Fox News on Sunday that, "There's a special place in hell for any foreign leader that engages in bad faith diplomacy with President Donald J. Trump and then tries to stab him in the back on the way out the door."

Canadian officials who got their first glimpse of Fort McMurray since a wildfire erupted there said they were encouraged by how much of it escaped destruction, estimating almost 90 percent of its buildings were saved. But a tour of the fire-ravaged town on Monday also revealed scenes of utter devastation, with blocks of homes reduced to blackened foundations, front steps and metal barbecues. Alberta Premier Rachel Notley said 2,400 structures had burnt within the city while almost 25,000 were saved.

Canadian Prime Minister Justin Trudeau says his country is offering to lead NATO's new military training mission in Iraq for the first year and stands ready to provide 250 troops plus helicopters for the effort. 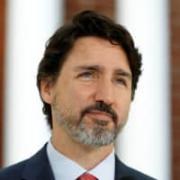 In their first talks since Suga took office earlier in the month, the Japanese leader told Trudeau by phone he hopes to work with him to maintain peace and stability in the region and within the international community, according to the Japanese Foreign Ministry. The Canadian prime minister said he looks forward to working with Suga to strengthen bilateral relations and promote the rule of law, according to the ministry. Under Suga's predecessor, Shinzo Abe, Japan pushed a free and open Indo-Pacific as a counter to China's growing maritime assertiveness. The Japanese and Canadian leaders exchanged views on the situation in the East China and South China seas, where Beijing has various territorial disputes with neighboring countries including Japan. Suga asked for continued support for Tokyo's efforts to secure the return of Japanese nationals abducted by North Korea in the 1970s and 1980s, and Trudeau promised it, the ministry said.

Gerald Butts, addressing an incident that has cost Trudeau two senior cabinet ministers so far, said he had one short conversation with the minister, Jody Wilson-Raybould, at the time about helping construction company SNC-Lavalin Group Inc. Butts quit as Trudeau's principal private secretary on Feb 18.